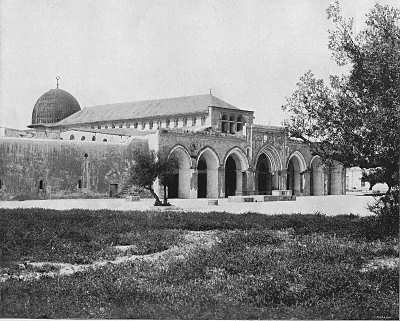 Source: Earthly Footsteps of the Man of Galilee, p. 121.

Within the sacred inclosure of the ancient temple is the Mosque el Aksa. This mosque stands close to the south wall and near the southwest corner of the haram. About the middle of the sixth century the Emperor Justinian built a magnificent basilica in Jerusalem in honor of the Virgin. The description of the plan and site justifies us in concluding that it was identical with the present Mosque el Aksa. It stands near the beautiful Mosque of Omar. It is 272 feet long, 184 feet wide, covering 50,000 square feet. It has the form of a basilica of seven aisles. The stones in its foundation are immense in size. They were hewn from the mountains and brought from an exceeding height. The historian says: "First they made wagons equal to the size of the rocks, and placed a single stone on each, then forty oxen, chosen by the Emperor's order for their excellence, drew the stone to the destined spot." It has a Gothic porch of much later date. . . . The interior is supported by forty-five columns, thirty-three of which are marble and twelve of stone. (Source: Earthly Footsteps of the Man of Galilee, p. 121.)

Porch of the Mosque el-Aksa Next to the Dome of the Rock, the Mosque el-Aksa is the largest and finest building in the Haram. It is at the south end, overhanging the Wall of Ophel, and its fine dome is conspicuous throughout the whole region southward as far as Bethlehem. Originally it was a church. About the middle of the sixth century the Emperor Justinian built a basilica in honour of the Virgin on this spot. It was taken by the Muslems and converted into a mosque. A century and a half later it was, to a large extent, rebuilt and much enlarged by El-Mahdi, the third Khalif of the Abassides. The Crusaders, of course, dedicated it to Christian worship, under the strange name of the Temple of Solomon and a portion of it was assigned to the new military order, The Knights Templars. The porch is doubtless the work of the Templars. (Source: Jerusalem, Bethany, and Bethlehem, p. 55.) Source: Earthly Footsteps of the Man of Galilee, p. 174.

The columns of the centre aisles are heavy and stunted, and have a circumference of nine feet three inches to a height of sixteen feet five inches; the remaining columns are better proportioned. The capitals of the columns are of four different kinds: those in the centre aisle are heavy and badly designed; those under the dome are of the Corinthian order, of white marble, and similar to those in the Dome of the Rock; those in the east aisle are of a heavy basket-shaped design; and those east and west of the dome are basket-shaped, but small and well proportioned . . . . The columns and piers are connected by a rude architectrave, which consists of beams of roughly-squared timber enclosed in a wooden casing which is poorly ornamented . . . . A great portion of the mosque is covered with whitewash, but the drum of the dome and the walls immediately beneath it are richly decorated with mosaics and marble . . . . Some wretched paintings by an Italian artist were introduced when the mosque was repaired at the commencement of the present century. (Source: Picturesque Palestine, vol. 1, pp. 65-66.)

Al-Aqsa Mosque, Mihrab in the Chapel of Omar Within the mosque is the entrance to the cistern known as the "Well of the Leaf," of which the following curious story is related. Mohammed said on a certain occasion, "One of my followers will enter Paradise walking, while yet alive." During the caliphate of Omar some Moslems came to Jerusalem to pray. "One of them went to this well to draw water, but while doing so his bucket fell to the bottom. He went down to get it, and to his great surprise found there a door opening into delicious gardens. Having walked through them for a time he plucked a leaf from one of the trees, placed it behind his ear, and hastened back to tell his companions. The matter was reported to the Governor, who sent his servants with the stranger to see these remarkable subterranean gardens; but no door could be found. Omar was written to, and he at once replied that the prophecy of Mohammed was now literally fulfilled, because a living man had walked into Paradise. To test the matter and settle all doubts he desired them to examine the leaf, and if it still remained green and fresh there could be no doubt that it came from Paradise. The leaf had, of course, preserved its verdure." (Source: Picturesque Palestine, vol. 1, pp. 67-68.)