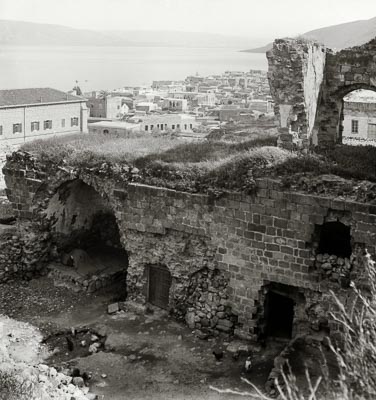 The steep hill already referred to, which overlooked the old city, rises to a perpendicular height of one thousand feet. It is full of ancient caves, some of which are over one hundred feet in length, with cemented walls and abundant evidences of their having been occupied as dwellings. They are now principally the abode of hyenas, foxes, and jackals. The old wall of the town led up on the south side of this hill in a zigzag line, and cisterns exist at several of the angles; while the castle on the summit must, like Safed, Tabor, and Gamala, have formed one of the strongholds of the country . . . . It was about the middle of the last century that the present walls of Tiberias were built and the castle repaired, which, had it not been for the terrible earthquake in 1837, might even now be in tolerable condition. As it is, the walls are dilapidated and the spacious castle is deserted, or occupied only by a handful of soldiers-a sort of police force, whose pay is very small and whose living is precarious. (Source: Picturesque Palestine, vol. 2, pp. 52-53.) 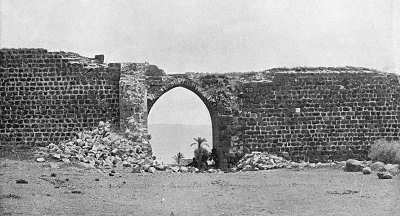 Source: Earthly Footsteps of the Man of Galilee, p. 182.

The above picture is very beautiful-the heavy wall, the fine arch, the graceful palms, the sea and the mountains beyond. This entrance is on the western wall of Tiberias. Through this all travelers from Nazareth pass into the city. Like Jerusalem, "Tiberias is regarded as a holy place by both Christian and Jew." Here Christ taught; here the Jews believe that the Messiah will rise from the waters of the lake, land in the city and place His throne at Safed, three thousand feet above the city. Tiberias occupied a very high rank as a Roman city. It was surrounded by a wall three miles in circumference-longer than the ancient wall of London or of modern Jerusalem.  . . . Once the region was full of activity. It is now utterly forsaken; but the lights and shadows at morning and evening dwell on the hillsides, the ruins of massive walls, of fallen pillars, of straggling columns standing in dismal solitude near the waters' edge or half buried on the slope above, suggesting the sumptuous buildings, the wealth, the luxury and revelry of ages ago. (Source: Earthly Footsteps of the Man of Galilee, p. 182.) 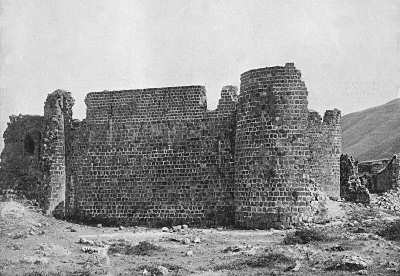 Source: Earthly Footsteps of the Man of Galilee, p. 187.

The reason for the building at Tiberias by Herod Antipater of his citadel is very clear. It was not too much of a commercial town and the site was dominated by a hill where he could build a castle and yet be near the shore. And the neighboring baths made the place famous throughout the Roman world. The building of the citadel took place but a short time before our Lord began His ministry on the lake . . . . In going from Nazareth to Capernaum [Jesus] would doubtless pass again in sight of Tiberias. In the above view we have the exterior of the citadel. Tiberias was quite a modern town when our Lord frequented this region. The walls were strengthened by ten round towers on the west, five on the north and eight on the south. There were also towers along the shore to protect the city against attack from the water. The spacious castle is now entirely in ruins. (Source: Earthly Footsteps of the Man of Galilee, pp. 183, 187.)

The Gadarene Country from the Watch Tower of Tiberias 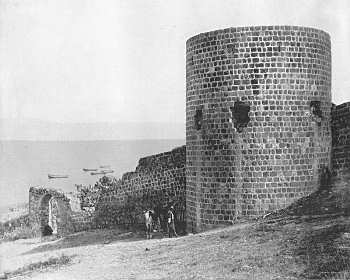 Source: Earthly Footsteps of the Man of Galilee, p. 181.

It is not known by what route Saul returned to Jerusalem [from Damascus]. The most direct would have led him by way of the Sea of Galilee, where Tiberius lived-the king of the Galilean province. At the time St. Paul passed here--A. D. 39--the city represented the Roman Empire, then in control of the world. St. Paul represented crucified King of the eternal kingdom to be. We have before us a glimpse of the broken walls of that representative Roman city. It is in ruins now -symbol of the broken power which sought to destroy the uprising Kingdom of God. War, pestilence, storm, earthquake, have rent the wall and practically prostrated the old Roman center. The warm fountains and the frequent earthquakes show that the elements of destruction are still at work beneath the surface. It is a city without a future, the memories that hallow it are memories not of the Roman king, his palace and his power, but of the gentle and mighty Messiah who preached by the seaside and wrought His wonders on its waters and among the people who lived about it. (Source: Earthly Footsteps of the Man of Galilee, p. 308.)