Bethlehem Church of the Nativity 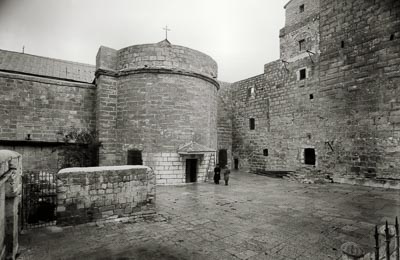 Church of the Nativity, Courtyard

So far back as the days of Justin Martyr, in the earlier part of the second century, the place of our Lord's birth was pointed out in "a certain cave very close to the village;" . . . . Under the direction of Helena a splendid basilica or Christian church was erected. This still remains, having escaped destruction during the many convulsions which have ravaged the country for centuries. It has been added to, slightly altered, or, as modern architects would term it, "restored" occasionally, notably by the Emperor Justinian, but in its main features it is unchanged, the oldest existing Christian church not only in Palestine, but in the world. (Source: Picturesque Palestine, vol. 1, pp. 125-126.)

Church of the Nativity's Entrance 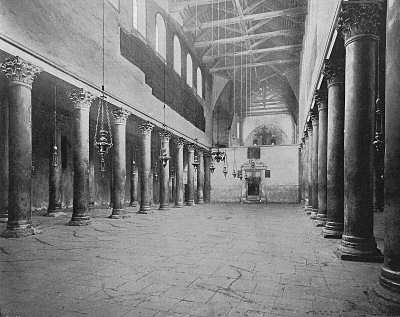 Source: Earthly Footsteps of the Man of Galilee, p. 28.

The Church of St. Mary is the property of three leading sects-- the Greeks, the Latins and the Armenians . . . .It is built in the shape of a Latin cross. The nave and side aisles are formed by lofty columns of reddish, white-veined limestone. The capitals are Corinthian, and from the base to the top each pillar measures about nineteen feet. There are fragments of ancient mosaics to be found here and there on the walls. In this picture we have an excellent view of the church--plain, simple, stately, ancient, with stone pavements, and beyond the screen we can see the upper part of the cross over the great altar. (Source: Earthly Footsteps of the Man of Galilee, p. 28.) 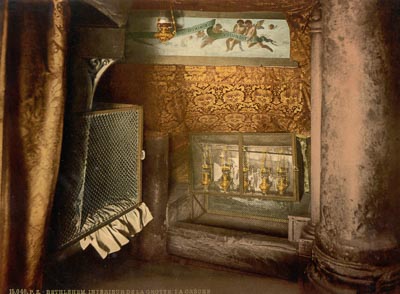 Chapel of the Manger

The Grotto of the Nativity appears to have been honoured as early as the second century, and is thus probably the very oldest of the holy caves of Palestine. It is a low, somewhat irregular vault, apparently hewn in the rock, thirty-eight feet long by eleven wide. At the east end is a semicircular apse, the sanctum of the entire structure- convent, churches, and chapels. On a marble slab fixed in the pavement, with a silver star in the centre, are these words:- HIC DE VIRGINE MARIA JESUS CHRISTUS NATUS EST.  ("Here Jesus Christ was born of the Virgin Mary.")  Not far distant, in an angle of the Grotto, is the Chapel of the Manger. But the real manger is gone. It was, we are told, carried to Rome and deposited in the grand basilica of Santa Maria Maggiore. In its place here is a trough of white marble. (Source: Jerusalem, Bethany, and Bethlehem, p. 124.)

Door of the Church 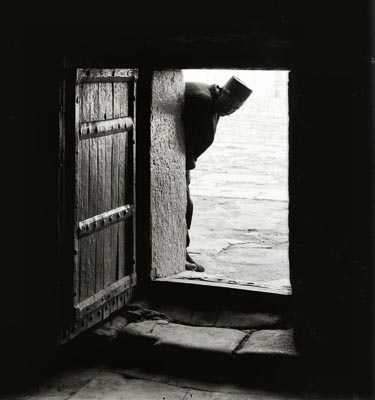 The basilica is moreover interesting because its general plan resembles, very closely, the description given by Eusebius of Constantine’s buildings over the Holy Sepulchre at Jerusalem. On the west was an atrium or outer court, parts of the outer walls of which and shafts of its columns still remain. A narrow vestibule or narthex, entered by a door scarcely four feet high, leads into the basilica itself, which consists of a nave and four aisles, with four rows of eleven columns each, a total breadth of about thirty yards, and a length about equal. (Source: Conder 1878: 1: 285.)