Tyre, no longer an island but a peninsula, stands out boldly into the sea, and the first view is very imposing, whether we approach it from the north or the south . . . . The strip of sand between the well and the gate has accumulated on the causeway by which Alexander the Great united the city to the mainland; for Tyre originally was an island rather less than a mile in length, containing about one hundred and twenty-five acres, and with the harbours between it and the mainland, on which was the larger city of Palæotyrus. The moles or breakwaters of the ancient harbours can still be seen both on the north and the south sides of the peninsula, the greater part of which consists of ruin-strewn fields, affording a charming camping ground . . . . [I]t is very possible there may have been quays and wharfs where is now the broad belt of sand south of Alexander's Causeway. This was very narrow at first, but the current has rapidly silted up the shallow bay, till the neck is almost as wide as the island itself. (Source: Picturesque Palestine, vol. 3, pp. 53-54, 59.)

Source: Earthly Footsteps of the Man of Galilee, p. 192

Twenty years ago Tyre, now called Es Sûr, was a miserable, squalid village; but it has latterly much increased, and though still chiefly a labyrinth of ruins, yet contains a population of over seven thousand, with some bazaars fairly stocked. A few small craft may generally be seen in the roadstead, and a number of fishing vessels in the inner harbour. Just at the north gate of the city, by which we enter, is the principal market, where scarlet leather, millstones from the Haurân, and tobacco, are the staples of commerce. The inhabitants are chiefly fishermen and some dyers, though the old Tyrian dyes are no more, and we may search in vain for Tyrian purple. The streets are most wretched, very few feet wide and wattled over at intervals with palm leaves and decayed brushwood; while windowless, mud-floored hovels nestle among huge fragments of polished granite and porphyry columns prostrate in rubbish. (Source: Picturesque Palestine, vol. 3, pp. 53-54.)

The Cathedral of the Crusaders occupies a conspicuous position at the south-east angle of the shrunken city, and though roofless, and at the West end wholly demolished, is still comparatively perfect . . . . It is one of the largest of the many Crusading churches of Syria, and occupies the site of a much older and yet more historic building, the basilica of Constantine . . . . Comte de Vogüé, the first living authority on Syrian architecture, fixes the date of its foundation 1125 A.D., by the Venetian Crusaders, who dedicated it to St. Mark. But it has an earlier history still. The original church was built by Constantine, Paulinus was its bishop, and the historian Eusebius delivered the oration at its consecration, which he has preserved at full length in his Ecclesiastic History, simply stating that it was the address delivered on the occasion by a certain man of moderate merit. In that church were laid the bones of the great father of the Church, Origen. But in evil times and national convulsions it had become, we know not how, a ruin, and the Crusaders nobly restored it. (Source: Picturesque Palestine, vol. 3, p. 54.) 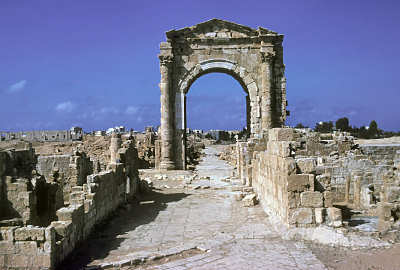 At the time of the Exodus, 1450 B.C., it was a strong city (Joshua xix. 29), and in the reign of David it was famous, not only for its maritime prowess, but for its arts and skill .  . . . Still closer was the intercourse between Hiram and Solomon, who formed a treaty of alliance and commerce. Israel fed the great city, which supplied the architect, the workmen, and many of the materials for the Temple . . . . [T]hroughout the long period of Persian supremacy, Tyre and her sister cities escaped all molestation. Careful to maintain their trade, the men of Tyre always made judicious alliances . . . and though Sidon was conquered by Ochus, Tyre remained until its capture by Alexander after a seven months' siege. The numberless granite columns, which strew the shore and form the bed of the sea, all belong to the second Tyre, which soon rose from its ashes, and continued to flourish till destroyed at the end of the second century by Pescennius Niger. Again it rose and maintained its prosperity till the time of the Crusades. It was long held by the Christians . . . .The final blow to its prosperity was given by the conquest of Syria by the Ottomans, in 1516 A.D. (Source: Picturesque Palestine, vol. 3, p. 58.)

We continue along the shore till we reach the bluff headland of Râs el Abyad, "White Cape," which boldly projects into the sea, the sharp and clearly defined boundary of the Phoenician plain . . . . The chalky headland is often called the Ladder of Tyre, and a true ladder it would be were it not that many of its rungs are wanting, and the path, being worn in the cliff's side without the slightest bridge or fence and overhanging the sea two or three hundred feet below, is somewhat trying to novices in Palestine riding . . . . From the Ladder of Tyre is a very narrow stony plain, extending in a crescent shape for about six miles as the crow flies, but over eight to ride, to the next headland, Râs en Nâkûrah . .  . beyond which commences at once the plain of Acre. Between the two promontories, slightly retired from the shore, are the ruins of a considerable town without a history, save that here Alexander encamped after the capture of Tyre, in honour of which a city was founded, called Alexandroschene . . . . The road or stony track keeps close along the shore and then climbs by the brow of the headland of Râs en Nâkûrah, the second Ladder of Tyre. (Source: Picturesque Palestine, vol. 3, pp. 67-69.)