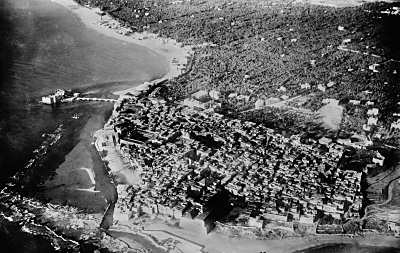 Old Sidon, named by the grandson of Noah, and styled Great Zidon by Joshua, is, perhaps, the oldest living city in the world, and claims the honour of being mentioned both in the book of Genesis and in the Homeric poems . . . . The town is situated on the north-western slope of a low promontory extending down to the sea. In front of the sea wall a chain of island rocks runs from north to south, formerly enclosing a harbour large enough to hold fifty galleys; but the Druse prince, Fakhr ed Dîn, filled it up with stones and earth to prevent the entrance of Turkish ships, and now only the little shakhtûrs of Kozta Jiz and his fellow sailors can find anchorage in the shallow waters. Sidon is a walled town, and, unlike Beirût, which has overleaped its walls and spread for miles around, it keeps closely pent up within its narrow limits. A more compact city could hardly be imagined, for not only are the streets too narrow to allow loaded camels to pass each other with facility, but the houses are to a great extent built on arches over the streets, so that one can ride or walk from one end of the town to the other under dark, gloomy tunnels. (Source: Picturesque Palestine, vol. 3, p. 42, 43.) 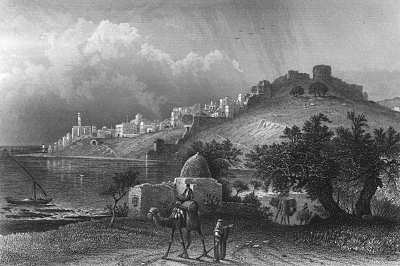 The Sidonians were already a commercial nation when the Egyptians expelled the shepherd kings, and from the first half of the seventeenth till the end of the thirteenth century B.C., the Sidonians were subject to the Egyptians . . . . The Sidonians supplied the mercantile and military navy of Egypt, and during this period, when no rival navy existed, Sidonian trade and commercial prosperity reached their highest point . . . . The commerce of Solomon between Ophir and his ports of Elath and Ezion Geber was carried on by Tyrian sailors, the descendants of the old Sidonian navigators . . . . The ancient city, so often built, destroyed, and re-built, is now a town of nine thousand inhabitants, and in its want of business life and enterprise, a typical oriental city . . . . Beirût has destroyed the commerce of Sidon, and the caravans, bringing the wheat and butter of the Haurân to Beirût and carrying back the wares of Europe, pass by Sidon, outside the walls. (Source: Picturesque Palestine, vol. 3, pp. 42-43.) 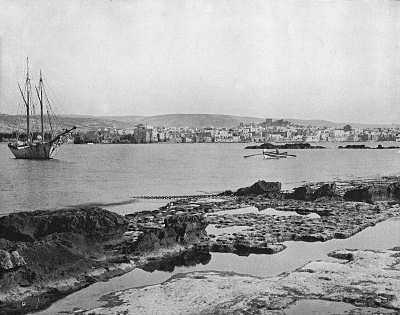 Source: Earthly Footsteps of the Man of Galilee, p. 310

Sidon from the Sea

Sidon was the Divine City, which gave gods to the Phoenicians, and through them to Greece, Italy, and Carthage. It was the Jerusalem of Baal worship. Here was worshipped that divine couple of the Phoenician religion, Baal Sidon and Ashtaroth, the same which at Gebal (Jebeil) was called Thammuz and Baalath, at Carthage Baal Hamon and Tanith, among the Hittites Shed and Shedath, and in Damascus Hadad and Atargath . . . .The hardy navigators of Sidon and Tyre, in pushing their adventurous prows into the Euxine, the Ægean, and beyond the Pillars of Hercules, carried with them their religion and their peculiar divinities. Their Ashtaroth became Aphrodite in Greece, and the temple of Thasos in the Ægean was dedicated to Melkarth, the Tyrian Hercules. In the island of Malta a dedicatory inscription speaks of "the lord Melkarth, Baal of Tyre." (Source: Picturesque Palestine, vol. 3, p. 42.) 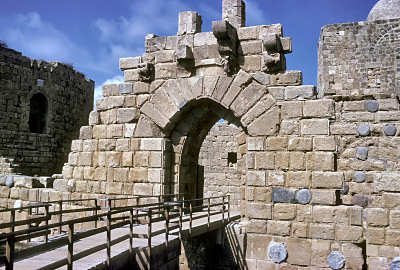 During the Crusades, Sidon was alternately in the hands of the Franks and the Muslims, and suffered terribly from capture and re-capture by the hostile armies . . . . The Kŭl'at el Bahr, or Castle on the Sea, stands on a small island connected with the land by a bridge of nine arches. It was built in the thirteenth century, the large blocks belonging to a more ancient structure. The island on the west and south-west was once covered by a massive sea-wall, protecting the harbour from the waves, but after the destruction of the harbour by Fakhr ed Din, the huge blocks were removed for building purposes, and in rough weather the sea makes a clean breach over the rocks into the little harbour. (Source: Picturesque Palestine, vol. 3, pp. 43, 46-47.)