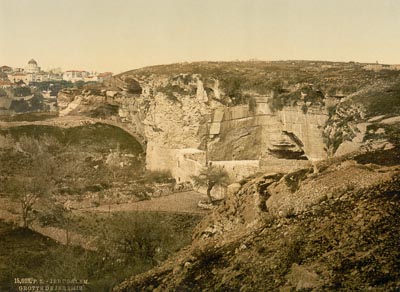 In 1878 Captain Conder, in his “Tent Work in Palestine,” stated his conviction that the real site of Calvary was to be found on a rocky knoll outside the northern wall and close to the cave known as “Jeremiah’s Grotto.” It is just “without the gate” now called the Damascus Gate, and is a rocky precipice of about fifty feet high, at a distance of five hundred feet from the city wall. The top of the knoll is rounded and dome-like, and is one hundred and ten feet higher than the Sacred Rock of the Temple, of whose enclosure it commands a view. . . . A Jewish tradition points to this hill as the “Beth-has-sekîlah,” or “house of stoning;” while early Christian tradition fixes it as the scene of the martyrdom of Stephen. According to Dr. Chaplin, the Jews to this day designate the knoll as the “place of stoning.” The hill, in certain lights, appears to present a striking resemblance to a human skull. The adoption of this site by Dr. Chaplin, Dr. Merill, and by the late General Gordon, has helped to give it considerable popularity. (Source: Jerusalem, Bethany, and Bethlehem, p.166-67.) 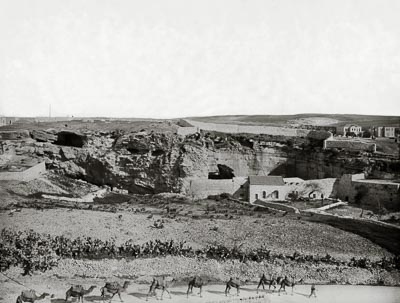 “A sort of amphitheatre is formed by the gentle slopes on the west; and the whole population of the city might easily witness from the vicinity anything taking place on the top of the cliff. The knoll is just beside the main north road. It is occupied by a cemetery of Muslem tombs, which existed as early as the fifteenth century at least. . . . The hill is quite bare, with scanty grass covering the rocky soil, and a few irises and wild flowers growing among the graves. . . . The hillock is rounded on all sides but the south, where the yellow cliff is pierced by two small caves high up in the sides. . . . In 1881 it was found that a Jewish tomb existed on a smaller knoll west of the north road, about two hundred yards from the top of the first-mentioned knoll” (“Survey of Western Palestine,” Jerusalem volume, p. 432). (Source: Jerusalem, Bethany, and Bethlehem, p. 166.) 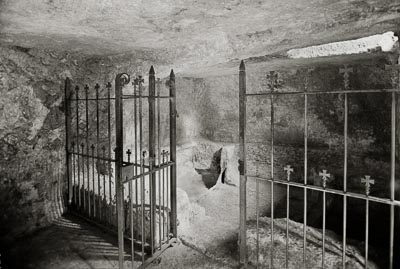 Of this tomb Captain Conder writes: “The whole is very rudely cut in the rock, which is of inferior quality. The doorway is much broken, and there is a loophole or window, four feet wide, on either side of the door. The outer court, cut in the rock, is seven feet square; and two stones are so placed in this as to give the idea that they may have held in place a rolling-stone before the door. On the right is a side entrance, leading into a chamber with a single loculus. The chamber within the tomb entrance is reached by a descent of two steps, and measures six feet by nine feet. From either side wall and from the back wall is an entrance leading into a side chamber. A passage runs in continuation of each entrance, and on each side is a bench about two and a half feet wide by two and a quarter high.” Captain Conder continues, after stating his view that the adjoining mound was the place of public execution: “It would be bold to hazard the suggestion that the single Jewish sepulchre thus found is indeed the tomb in the garden, nigh unto the place called Golgotha; yet its appearance so near the old place of execution and so far from other tombs in the old cemeteries of the city is extremely remarkable.” (Source: Jerusalem, Bethany, and Bethlehem, p. 166.) 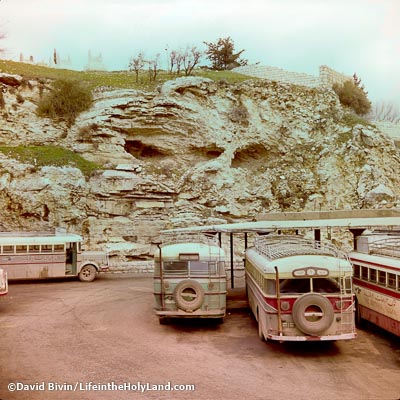 Source: Views that Have Vanished: The Photographs of David Bivin

Haskett Smith sums up the reasons in favor of Jeremiah's Grotto as follows: 1st, he claims the tomb here has never been finished and yet has been occupied; 2d, that it was constructed about the time of Christ, being Herodian in character; 3d, that it has been occupied for one burial, and one burial only; 4th, that it was originally intended for a Jew, and that a rich and influential one; 5th, though built for a Jew, it was an object of sacred reverence to the early Christians, for it has been used as a place for Christian worship, and is surrounded by Christian tombs; 6th, that it occupies a position with regard to the hill opposite it which accords with the Gospel narratives . . . 7th, that the frescoed cross with the sacred monograms still faintly to be traced on the east wall, and evident of an age almost, if not quite, co-equal with the first century, connects the tomb most intimately with Christ. (Source: Earthly Footsteps of the Man of Galilee, pp. 255-256.)