Dome of the Rock, Exterior

Source: Earthly Footsteps of the Man of Galilee, p. 233

Site of the Temple

In the centre of the Haram is the raised platform on which stands the Kubbet es Sakhra (Dome of the Rock), erected over the sacred rock from which Mohammed is said to have ascended into heaven. The platform has four sides, but none of its sides are equal, nor are any of its angles right angles. Its general level is about sixteen feet above that of the Haram esh Sherif, and the top of the "Sakhra" is nearly five feet higher, or two thousand four hundred and forty feet above the Mediterranean. The platform is paved with flat slabs of stone. On the west and south-west it is partly supported by vaults. In other directions the rock rises up to, or nearly up to, the level of the pavement. The most interesting feature is the "Sakhra," or Rock, to which the beautiful building gives an air of mystery and a prominence that it would not possess if the pavement were removed and the ground were restored to its original form. The platform is approached by several flights of steps, at the top of which are screens supported by light columns, called "mawazin," or balances . . . . (Source: Picturesque Palestine, vol. 1, pp. 53-54.) 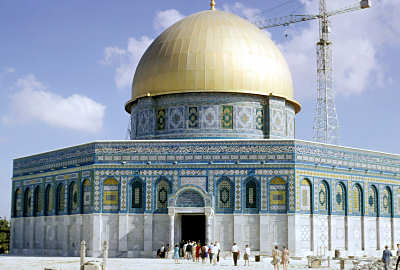 The Kubbet es Sakhra (Dome of the Rock) is an octagonal building, each side of which measures sixty-six feet . . . . There is a door in each of the four faces fronting the cardinal points-on the north, Bab el Jenné (Gate of Paradise); Bab el Gharby (West Gate); Bab el Kiblé (South Gate); and the Bab en Neby Daúd (Gate of the Prophet David) . . . . The building consists of a basement sixteen feet high, pierced only by the four doors; then a story of plain masonry, twenty feet in height, with seven round arches on each side, thirty-eight of which are pierced for windows, and the remaining eighteen are blind panels. The basement is cased with slabs of various coloured marble, which are fastened to the masonry by metal clamps run in with lead. . .  . The external walls above the basement are entirely covered with tiles, which produce a very fine effect. Verses of the Koran, beautifully written in interwoven character, in blue and white, run round the parapet wall, and beneath are elaborately executed designs in various colours. The tiles are nine and a half inches square and firmly embedded in mortar. (Source: Picturesque Palestine, vol. 1, pp. 54-55.) 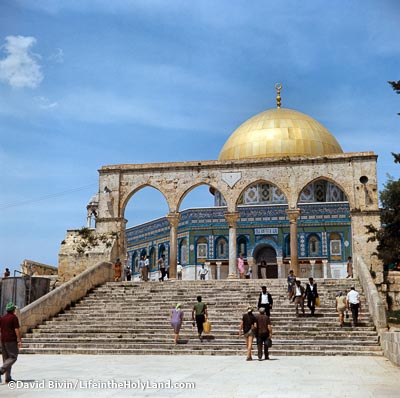 Our steps were naturally first turned to the central mosque. It is a perfect gem. I was much struck with the chasteness of design, and wonderful minuteness and delicacy of detail, in the Saracenic architecture. The encaustic tiles which cover the whole exterior reflect in gorgeous hues the bright sunlight. Over the windows and round the cornice are broad borders of beautifully interlaced Arabic characters, so large that one can easily read them from below. A graceful dome, tipped with a golden crescent, crowns the whole, and is seen from afar. The position of the mosque, raised on a platform of white marble, so as to overtop all other buildings, adds vastly to the appearance. It is octagonal in form, each side measuring sixty-seven feet. Four doors facing the cardinal points lead to the interior, which is one hundred and forty-eight feet in diameter, the dome being sixty-six. The principal door has a portico with small marble columns . . . (Source: Jerusalem, Bethany, and Bethlehem, p. 47.) 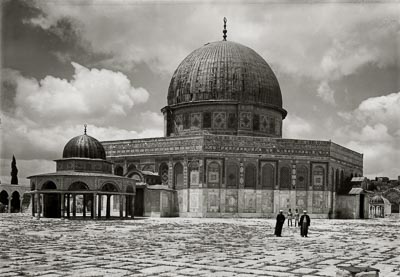 The platform on which the Dome of the Rock stands is paved with limestone slabs, and carries several minor buildings, of which the "Tribunal of the Prophet David," or "Dome of the Chain," in front of the east door of the mosque, is the most remarkable. This beautiful little building is an open pavilion of eleven sides, with six internal columns, which support an hexagonal drum and a domed roof. It has a "mihrab" on the south face . . . . According to tradition David's judgment-seat stood beneath the dome, and it was here that Mohammed caught a first glimpse of the houris of Paradise. In the twelfth century the building was looked upon as the tomb of St. James, the brother of our Lord, whose body is said to have been removed to this spot from the Valley of Jehoshaphat, where it was first buried. The remaining buildings are the " Dome of the Spirits," beneath which the natural rock may be seen; the "Dome of El Khydr" (Elias, or St. George); the "Dome of the Prophet Mohammed," and other structures of less importance. (Source: Picturesque Palestine, vol. 1, p. 65.)