Source: Earthly Footsteps of the Man of Galilee, p. 315

The Dog River is a large stream, flowing with great rapidity. It has its sources in the Mount Jebel Sunnin. It enters the sea between rugged, steep and lofty precipices about seven miles to the northeast of Beyrout. The scenery of this mountain gorge is romantic and impressive. The mountains extend out to the sea, so that on the north there is only a narrow, rocky passage along the shore, while on the south the ramparts jut out still further, and an ancient artificial road six feet in breadth is hewn in the rock, sometimes fifty feet above the water, for the distance of a mile. There are many curious inscriptions cut into the solid rock on tablets indicating the successive administration of Egyptian and Syrian dynasties. (Source: Earthly Footsteps of the Man of Galilee, p. 315.) 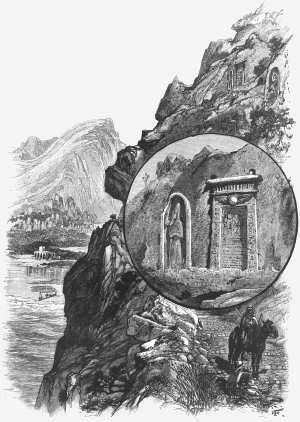 On the rock-cut road round the promontory south of the Dog River . . . are to be seen the collection of Assyrian and Egyptian tablets for which this pass has long been celebrated. There are nine tablets in all, three Egyptian and six Assyrian. . . . At the top of the pass on the modern road is a pedestal, and near by it a fragment of a Roman milestone. Here, according to tradition, once stood the statue of a dog, which gave its name, Nahr el Kelb, to the river. Among the striking features of the pass are the old road beds cut in the solid limestone rock by successive monarchs of antiquity. The foot-holes of the horses and the grooves worn by the chariot wheels of armies are still distinctly traceable in the rock. Here passed Pul, Tiglath Pileser, Sesostris, Shalmaneser, Sargon, and Sennacherib; here swarmed the hosts of Alexander the Great en route for Egypt; here passed the Romans, the later Greeks, the Arabs, the Turks, and the Crusaders; and here pass constantly the traders and travellers of the East. (Source: Picturesque Palestine, vol. 3, p. 31.) 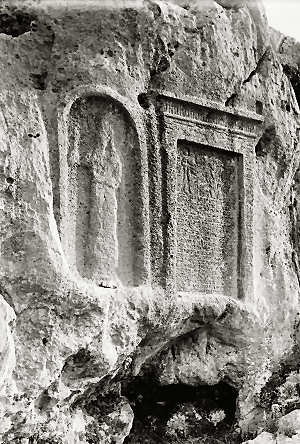 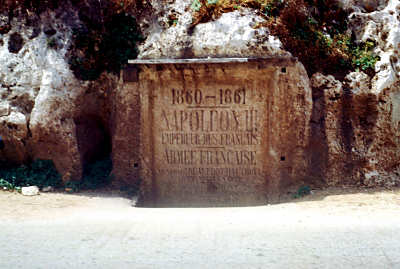 On the 29th of May, 1894, the American consul at Beyrout, the Hon. Thomas R. Gibson, of Augusta, Ga., called for the artist and the editor of this volume, who accompanied him through the East that year, and took them by carriage to Dog River, now known as the Nahr el-Kelb, the same as the ancient Lycus. The road over which we passed follows the windings of the bay northward. We saw on our ride the church of St. Elias, said to be the oldest place of Christian worship in existence. After a ride of about six miles we reached the river. On the way we also saw the famous water-works which supply Beyrout with water from the snows Of Lebanon. The works are operated by an English company. (Source: Earthly Footsteps of the Man of Galilee, p. 315.)