The population of Jerusalem may be estimated at about twenty-one thousand, of which seven thousand are Moslems, nine thousand Jews, and five thousand Christians. The Moslems belong for the most part to the same race as the peasantry of Palestine, representatives it may be, though with a large intermixture of foreign blood, of the Jebusite that dwelt in the land. The higher classes, as a rule, pass most of their time in the bath, the mosque, or the bazaar, smoking, praying, or gossiping. The Turks, who for the most part belong to the official class, are very inferior to the Arabs in education and capacity; whilst the fellahin are chiefly remarkable for their fine physique, and that keenness in barter which seems to distinguish the descendants of the ancient races that peopled the eastern shores of the Mediterranean. (Source: Picturesque Palestine, vol. 1, p. 118.) 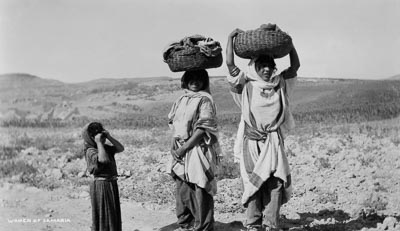 The Arab will tell you that that is his country wherever Arabic is spoken. This gives a wide expanse of dominion. Your donkey-boy at Cairo, for instance, will be indignant if you call him an Egyptian, and will say at once, "Me, Arab!" At Damascus the bazaars and squares will be full of Arabs, come in probably from the Haurán; then away to Palmyra and on to the Great River you will scarce hear of any other people. Not only the country which we usually term Arabia Proper, but the northern parts of Africa, between the Sahara and the littoral of the Mediterranean, seem to be given up to them. The truth is, we mix together all the nomades of this part of the world, and, losing sight of their differing tribal characteristics and habits, believe that the vast territory (larger than all France and Spain together) lying between the Red Sea and the Persian Gulf must, as the cradle of the race, be inhabited by a like people. Hardly do we care to realise what a difference exists between the sheikh of some district in Central Arabia and the Bedawin chief of a desert tribe, who exhibits nature almost at its lowest stage. (Source: Picturesque Palestine, vol. 4, p. 43.) 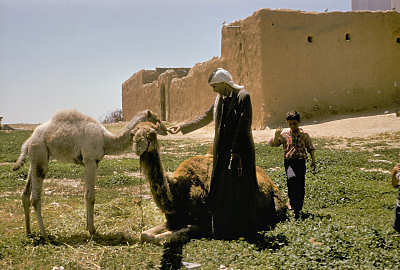 The European public is deluged with accounts of Arab customs, Arab ways, Arab qualities, houses, dresses, women, warriors, and what not; the most part from materials collected in Syria, Mesopotamia, Egypt, 'Irāk, perhaps Tunis, Algiers, and Morocco, or at the best at Djiddah and on the Red Sea coast . . . . Such narratives, however accurate they may be for the localities and races they describe, have not an equal claim to the title of correct delineations of Arabs and of Arab customs . . .  . Syria and Egypt, Palmyra and Bagdad, even less Mosoul and Algiers, are not Arabia, nor are their inhabitants Arabs. The populations alluded to are, instead, a mixture of Kurds, Turcomans, Syrians, Phoenicians, Armenians, Berbers, Greeks, Copts, Albanians, Chaldeans, not to mention the remnants of other and older races, with a little, a very little Arab blood-one in twenty at most-and that little re-diluted by local and territorial influences!  . . . In short, among these races, town or Bedawín, we have no real authentic Arabs. Arabia and Arabs begin south of Syria and Palestine, west of Basrah and Zobeyr, east of Kerak and the Red Sea. Draw a line across from the top of the Red Sea to the top of the Persian Gulf: what is below that line is alone Arab. (Source: Picturesque Palestine, vol. 4, p. 46-47.)