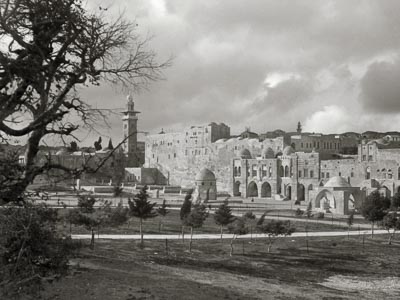 The path which Jesus took from the Sanhedrim to Calvary is known as the Way of Sorrows-- the Via Dolorosa. The first station in this sad journey is the Tower of Antonia. Of course, we can not be certain as to its location. According to Colonel Wilson, its present position was assigned it during the period of the Crusaders. Here dwelt the powers representing the Roman Empire, powers competent to deliver the gentle victim of Jewish hate from the ignominious death to which He was doomed. Rome represented the world of human glory and wealth, of enterprise and conquest. What had that world in that day to do with a meek Galilean teacher, who professed to have been sent by the Father of men to teach his children upon the earth meekness, forbearance, patience and love? (Source: Earthly Footsteps of the Man of Galilee, p. 250.) 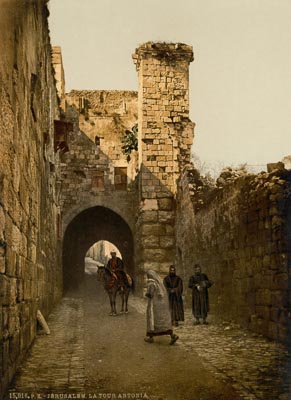 The north-west angle of the Haram esh Sherif has been cut out of the rock so as to leave escarpments from three to twenty-three feet high facing inwards on the north and west. There is here, in fact, a mass of rock, about one hundred feet thick, which is separated from the more northern hill of Bezetha by a ditch one hundred and sixty-five feet wide; and from twenty-six to thirty-three feet deep. Upon the rock stands a Turkish barrack, the successor, perhaps, of the Tower of Antonia, which Herod built to "secure and guard" the Temple. The tower, or castle, was of great extent, and played an important part during the siege of Jerusalem by Titus. It was on a rock fifty cubits high, which was covered from its foot with smooth stones, like the lower part of the Tower of David, so that "any one who would either try to get up or to go down it might not be able to hold his feet upon it." There were towers at each corner of the castle; that at the southeast was seventy cubits high, that it might overlook the Temple; and that at the south-west had passages to the Temple cloisters, by which the Temple guard went to its post . . . (Source: Picturesque Palestine, vol. 1, pp. 42-43.) 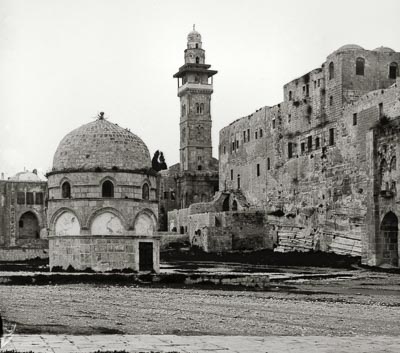 Tower of Antonia from the Temple Area

During my first visit to Jerusalem, the Temple area was sternly closed against Kafers-that is, non-Muslems of every sect and country. For Christian or Jew to enter was almost certain death. I tried to peep in through the open gates, but was rudely, even savagely, driven back by dervishes. As a last resource my kind companion took me to the palace of the pasha at the north-west angle. He had the entrée, and we were soon on the terraced roof which commands the whole area. The palace is historically interesting. It occupies part of the site of the fortress of Antonia. Nehemiah calls it "the castle which appertaineth to the house" (Temple). It was occupied by Pilate and his Roman garrison in the time of our Lord. The engraving . . . shows the side towards the Haram . . . . From the flat roof one obtains perhaps the very best general view of the Haram and its numerous buildings. (Source: Jerusalem, Bethany, and Bethlehem, p. 44-47.)

Temple Area from the Antonia Fortress 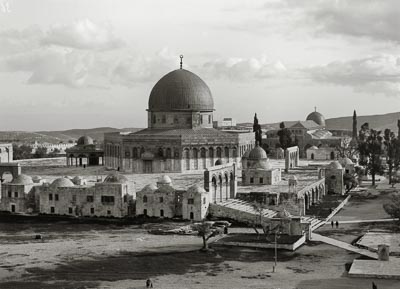 This photograph offers a roof-top view from the northwest. It was most likely taken from the roof of the El-Omariyya Boys’ School which sits atop a tall rock scarp at the northwest corner of the Haram. The school, most experts would say, is indeed the site of the ancient Antonia, the Herodian fortress-palace described in some detail by Josephus. If this is the case, those garrisoned at the fortress would have had a view similar to this.

See also Temple Mount, Exterior of the Dome of the Rock, Al Aqsa Mosque, Via Dolorosa, Church of the Holy Sepulcher.