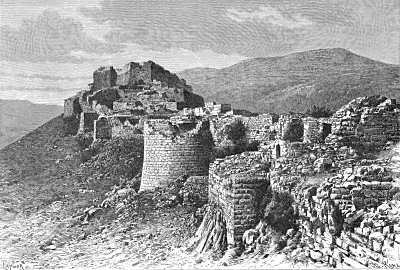 A little more than one hour from Bâniâs is the great castle of Subeibeh . . . This has been one of the strongest fortresses in the East. . . . Its situation is remarkable, and from its broken walls one looks across the Hûleh Plain to the hills of Galilee in the west, while at his feet the mountain-slope descends in terraces that are covered with oaks and olive-trees. The castle is not far from one thousand feet long by about three hundred feet in width, and the walls at some points are even yet one hundred feet high. The natural approach to it is from the east, while it is well-nigh inaccessible from the south, west, and north. On the north side the mountain, for six hundred feet below the castle, presents an almost perpendicular wall before the bottom of the ravine is reached. The strength of the position has been greatly augmented by the skill and labour of man, until this might appropriately be called the Gibraltar of Palestine. (Source: Picturesque Palestine, vol. 2, p. 119.)

Mount Hermon from the Castle 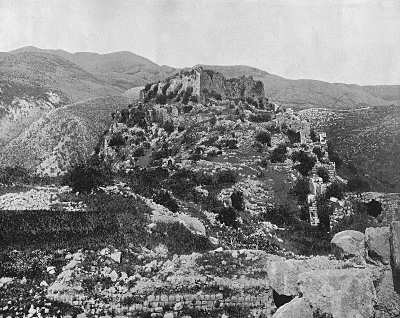 Source: Earthly Footsteps of the Man of Galilee, p. 211

The Castle of Baneas, or, to give it its proper name, Subeibeh, is among the most imposing buildings in Palestine. Others, like the Temple of Jerusalem and the Mosque of Hebron, have more historic and sacred interest attached to them; but in commanding situation, extent, and strength, Subeibeh is unrivalled. It crowns an isolated peak, which rises at least fifteen hundred feet above the town, and is the most conspicuous object in the neighbourhood. . . . The eastern end of the site is much higher than the western, and advantage has been taken of this to form a strong citadel, capable of separate defence. The access to it even now is a work of no little difficulty. There is a deep moat hewn in the rock across the front of it, and within the moat is a lofty and strong wall, thus effectually shutting it off from the rest of the fortress. This inner citadel is the best preserved part of the castle, the walls and exterior towers being in places almost perfect. Within are vaulted chambers still habitable; and there is a small building with columns, which may have been a chapel in mediæval times, when a Crusading garrison occupied the citadel. (Source: Galilee and the Jordan, pp. 132, 135.) 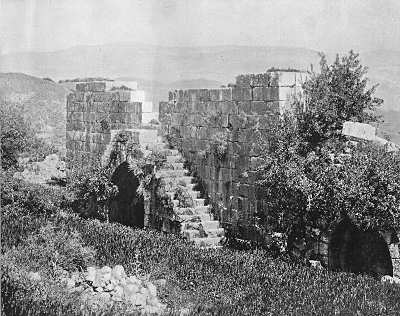 Source: Earthly Footsteps of the Man of Galilee, p. 209

Stairway to Tower of Castle

An ample supply of water was secured for the garrison by huge cisterns hewn in the rock, both within the citadel and outside. . . . I was informed by shepherds who take up their abode in the castle, and pen their sheep and goats in it during part of the hot season, that they have never known the water in the cisterns to be exhausted; and certainly I found most of them well-nigh full during both my visits, one of which was made in the month of July. The belief is that they are supplied by subterranean channels from the adjoining hills, where springs are abundant. The cisterns are mostly deep, unnecessarily so, as I thought, if only intended to collect and retain surface water. . . . The solidity of its walls alone has prevented that utter ruin which we have noticed in other towns of Galilee. Had it not been for the earthquakes, which have committed such fearful ravages on the towns and villages of this district, the Castle of Subeibeh might still have remained perfect almost as when built; but no strength of wall can resist the terrible shock of an earthquake. (Source: Galilee and the Jordan, pp. 135-36.) 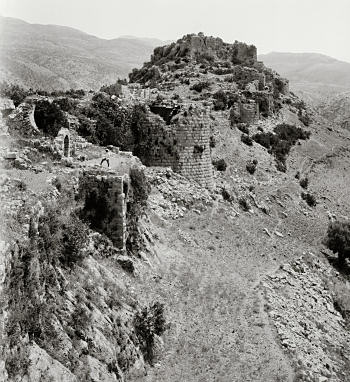 The path up to it is steep, rugged, and very difficult. It took me a full hour of painful climbing on a strong and sure-footed Arab horse to reach the gate. . . . As seen from the plain of the Jordan on the west, and from the opposite ridge of Naphtali, the castle appears to stand on the apex of a conical peak; but on reaching the top I found that it occupies the culminating point of a narrow ridge, which is joined by a lower ridge to the mountain chain on the east. The only practicable road to it from Baneas leads diagonally up the southern declivity of the hill, then along the summit of the narrow ridge, then up a zigzag path among huge fragments of rock and thickets of hawthorn and prickly oak and holly to the foot of the eastern tower, then along a ledge of rock which skirts the southern base of the ramparts, exposed at all points to missiles thrown from above. We finally reach a flight of stone steps leading up to a portal in a round tower at the south-west corner. There is but one entrance, and it is so placed as to be practically inaccessible so long as the fortress is held by an active garrison. (Source: Galilee and the Jordan, p. 132.) 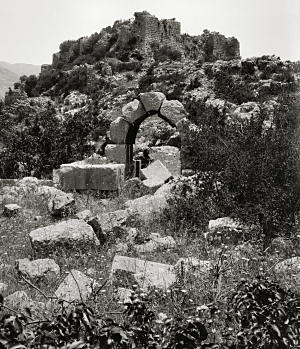 The early history of the Castle of Subeibeh is unknown. There is no notice of it before the time of the Crusades. The first record I can find is that it was captured by the Christian host in the beginning of the twelfth century. . .&nbspIts position commanding the city of Baneas, and the great road from the rich valley of the Jordan to Damascus, made its possession of great strategical value. . . . Subsequent to its capture by the Crusaders it passed through the customary varied fortunes of Syrian strongholds—now taken by Moslems, now by Christians, each destroying, repairing, or rebuilding, as best suited their purpose. Nureddîn, father of the more famous and better-known Saladin, took it by storm in 1163; and thenceforth the Crescent waved over its battlements, until it was abandoned in the seventeenth century. Since then it has been unoccupied, except occasionally and temporarily by a few goatherds. (Source: Galilee and the Jordan, p. 136.)