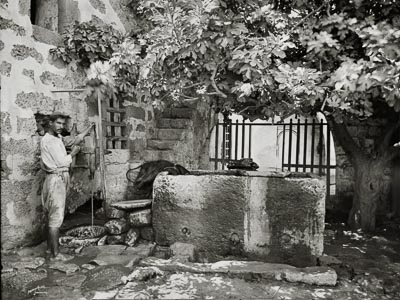 Traditional House of Simon the Tanner

The traditional house of Simon the Tanner furnishes, from its flat roof, a fine point of view for this charming scene. And there is reason to believe that the tradition is not far wrong. The house is ‘by the sea-side;’ the waves beat against the wall of its courtyard. An ancient well, fed by a perennial spring, furnishes the water needful for the tanner’s trade; and tanneries of immemorial antiquity probably go back to the time of Peter’s visit or even earlier. The vision here vouchsafed to the apostle gains a new appropriateness on this spot. Joppa has always been the port of Jerusalem. It is, indeed, the only port of Southern Palestine. Thence ‘the ships of Tarshish’ were seen coming and going. The ‘isles of Chittim’ (Cyprus) lie just below the horizon. It was the point at which the Jewish and Gentile worlds came into contact. Peter, looking out over the waters of ‘the Great Sea’ towards Greece and Rome, where the gospel was to win its greatest victories, would be at no loss to apply the lesson taught by the vision. (Source: Those Holy Fields, pp. 13-14.)

Church of Simon the Tanner 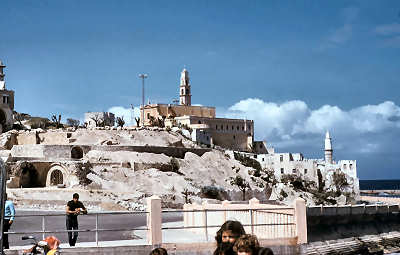 Descending from the highest part of Jaffa to the extreme northwest corner of the city, we find the house of Simon, the Tanner, "by the sea." Tradition says, it was here Peter prayed about the sixth hour, fell into a trance, saw heaven open and the great sheet let down. A distinguished writer says, "We Gentiles should regard this vision of Peter with special interest, and I see no reason why tradition may not have preserved the knowledge of the site. Both Christians and Mohammedans reverence the place. The roofs of the houses even now have a wall or balustrade around them where a person may sit or kneel without exposure to the view of others." Dr. Hackett says, "At Jerusalem I entered the house of a Jew early one morning and found a member of the family sitting secluded and alone, on one of the lower roofs, engaged in reading the Scripture and offering his prayers." When surrounded by battlements, and shaded by vines trained over them like those of the present day, they would afford a very agreeable retreat even at the "sixth hour." (Source: Earthly Footsteps of the Man of Galilee, p. 94.) 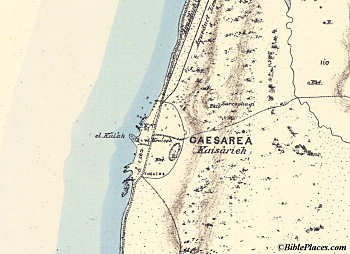 "There was a certain man in Caesarea called Cornelius, a centurion of the band called the Italian band; a devout man, and one that feared God with all his house, which gave much alms to the people, and prayed to God alway. He saw in a vision, evidently about the ninth hour of the day, an angel of God coming in to him, and saying unto him, Cornelius. And when he looked on him, he was afraid, and said, What is it, Lord? And he said unto him, Thy prayers and thine alms are come up for a memorial before God. And now send men to Joppa, and call for one Simon, whose surname is Peter: He lodgeth with one Simon a tanner, whose house is by the seaside: he shall tell thee what thou oughtest to do."-- Acts, x: 1-6. It was upon this visit of Peter to Joppa that he saw "the heavens opened” . . .  . God taught Peter that he was no respecter of persons, "But in every nation he that feareth him, and worketh righteousness, is accepted with him." It was at this time that the Holy Ghost was poured out upon the Gentiles, and Cornelius was baptized. (Source: Earthly Footsteps of the Man of Galilee, p. 264.) 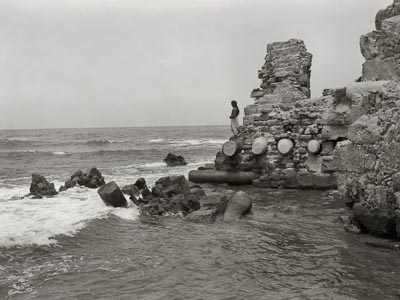 CÆSAREA SEBASTE . . . was planned and completed by King Herod the Great within the short space of ten or twelve years, and was inaugurated with great pomp and splendour in the twenty-eighth year of his reign, B.C. 12.  . . . “It contained sumptuous palaces and splendid edifices, all built of white stone brought from a distance,” now represented by shapeless mounds, fallen columns, and dislocated masses of masonry . . . . Cæsarea soon became the most important city in Palestine, and its chief port. It was the official residence of the Herodian kings and of the Roman procurators. Repeated mention is made of Cæsarea in the Acts of the Apostles .  . . . Eusebius, the celebrated ecclesiastical historian, was Bishop of Caesarea early in the fourth century, and towards its close the city was visited by Sta. Paula, the friend of Jerome. It is recorded that she saw the house of the centurion Cornelius, which had been converted into a church. (Source: Picturesque Palestine, vol. 3, pp. 126-27.)