Source: Earthly Footsteps of the Man of Galilee, p. 100

In the above view we have a scene characteristic of Palestine from the days of Abraham to the present time . . . . The Swgr, a tribe from the East, in the spring time occupies the whole valley of Jezreel, and in times of disturbance goes into the plain of Esdraelon. These various tribes migrate between assigned limits, wandering over some two hundred and four hundred square miles. Their migrations are regulated by the temperature of the seasons and by the water supply and pasturage. Thus they wander from one spring to another, to the sheltered valleys in winter and to shaded, breezy slopes in summer . . . . The dress, the trappings, the habits of the Bedouins are just what they were thirty centuries ago. The Bedouin camp is an object of peculiar interest. The tent of the Sheik is always known by a spear which stands on the ground before it. (Source: Earthly Footsteps of the Man of Galilee, p. 100.)

Busy Scene at a Desert Well 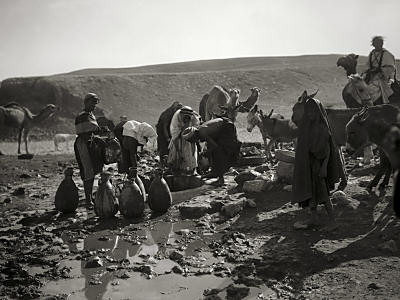 Crossing the Wâdy es Seba . . . we rode on . . . till we reached the flat-topped mound, or “tell,” commanding a splendid view from Beersheba eastward, to the sea on the west—Abu Jerar. Wells are its only visible ruins . . . . The wells stud the top and sides of the hill down to the bottom of the valley. All are more or less filled in, some of them even with the surface—perhaps the wells of Abraham, choked by Abimelech’s herdsmen. Some were filled only up to a depth of twelve or twenty feet, showing the lower part cut in the rock and the upper portion cemented; evidently later work, as the cement has many fragments of pottery in it. Many were roofed with low cupolas of very small masonry with a hole in the centre. Only two of them are perfect, the others being more or less broken in. We found water in two only of nineteen wells which we examined. Many of them seem to have been purposely filled in and utilised, after they were cemented, as storehouses by the Bedawîn. (Source: Picturesque Palestine, vol. 3, p. 168.) 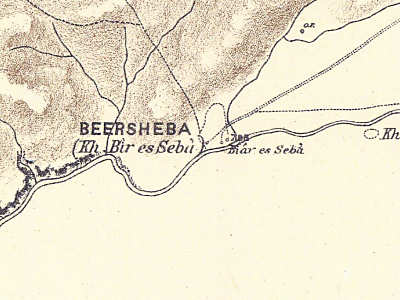 [W]e proceed to another spot connected with the history of the patriarch, Beersheba—variously interpreted, “the Well of the Seven” or “the Well of the Oath”—where he dug the well, and gave seven ewe lambs to Abimelech in token of an oath of covenant with him . . . . There were once seven wells here, two of which are still filled with water, and another, in a fairly perfect condition, is dry; they are all built of solid masonry. In the immediate vicinity may be seen traces of the other four wells . . . . The country around Beersheba consists of a rolling plain, intersected by the wâdy beds of Seba’ and Khŭlîl. In spring, when the rains have fallen, it is often covered for miles around with grass, flowers, and herbage; at other times it is nothing but a dry parched land, bare and desolate as the desert itself. Strange and solemn are the thoughts which such a place inspires. Here were the very wells, in all human probability, which the Father of the Faithful dug. The name he gave it still clings to the spot; the Bedawîn, to whom the Scriptures are unknown, still point with pride to the great work which their father Ibrahîm achieved . . . (Source: Picturesque Palestine, vol. 3, p. 207.)

Wall at Ramet el Khulil, the Site of Mamre

The site of Mamre, now known as Râmet el Khŭlîl . . . is about two miles north of Hebron, a little to the right of the road to Jerusalem. It was once a Roman road, carefully paved, as perhaps it had been in the days of royal Solomon, but certainly it is worse now than it could have been when it was but a mountain path, along which Abraham may have often passed to visit his friends at Hebron. The place is identified on the authority of Jerome, and must have been well known in his days, and the Jews have always looked on it and reverenced it as the home of Abraham. There is nothing to mark the place till we reach it—a small flat plain extends to the foot of the hills half a mile off, without a tree or a shrub, and only some few dilapidated fences where patches of vegetables have been cultivated . . . . A great terebinth existed here as late as the fourth century A.D., traditionally that which had shaded Abraham's tent, and very possibly its real successor. (Source: Picturesque Palestine, vol. 3, pp. 187-88.)

As we approach the environs of Hebron, on the left of the paved and walled road, a wide gateway leads through some vineyards to a large building, the Russian hospice, erected just behind a very fine old tree, the traditional oak of Mamre . . . . For at least three hundred years this tree, which is not a terebinth (elah), but, an ilex, or evergreen holm oak (Quercus pseudo-coccifera), has been visited by pilgrims and known as Abraham’s oak. That, however, was in another place, Ramet or Mamre, and was a terebinth. It has long since gone, and this noble tree will soon follow, for within the last twenty-five years it has lost more than half its limbs, and is rapidly sinking into decrepitude . . . . It used to spread its shadow over a circumference of one hundred yards, and its trunk measures thirty-two feet in circumference at a height of six feet from the ground . . . . One of the lower branches was broken down by a heavy fall of snow in the winter of 1850. It was cut up into logs and conveyed to Jerusalem; there were seven camel-loads; one log was sent to England. (Source: Picturesque Palestine, vol. 3, pp. 183, 193.)

See Bedouin, Woman at the Well, Psalm 23, David the Fugitive, or Shepherds and Flocks

At BiblePlaces, see Beersheba or Hebron