Baptisms in the Jordan River 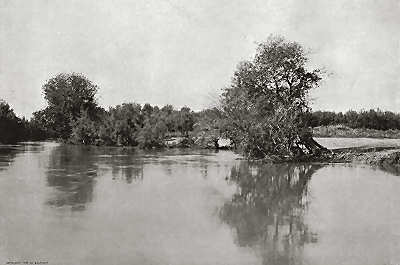 Source: Earthly Footsteps of the Man of Galilee, p. 142.

Place Where Christ was Baptized

There has been much speculation concerning the exact spot of the baptism of Jesus by John. It was either at the Ford of Jordan, "right against Jericho," where Israel crossed dry-shod, or, as Dr. Thomson holds, as far up the Jordan as the Ford of Damiah—nearest point, if Jesus "came from Nazareth of Galilee" by vale and brook, that leads from Salem to the river ("and John was baptized in Enon, near to Salem"). The bathing place of the Latin pilgrims is nearly due east from Jericho in Judea, and beyond the ruined convent of St. John. It is this part of the Jordan we see in the picture. It is "over against Jericho" and about four miles above the place where the Jordan empties into the Dead Sea. John had been baptizing in the River Jordan perhaps about six months, when, in the winter of A. D. 27, according to the harmony of Dr. Andrews, Jesus left Nazareth and came to the River Jordan and was baptized. This was a remarkable period of the world's history. The fullness of time had come. The world was ready for the new kingdom and for the King. (Source: Earthly Footsteps of the Man of Galilee, p. 142.)

Bathing-Place of the Latins, on the Jordan

. . . the crowds of pilgrims visit the river . . . near what is called the Helu ford, though each sect of Christians has a special spot for the completion of the pilgrimage, which is maintained as an article of faith to be the place of our Saviour’s baptism. Fortunately, as the Latin and Greek Easters do not fall on the same days, and as Easter is the prescribed time for the ceremony, there are no collisions on the banks of the sacred river. The Greek pilgrims bathe at a spot where there is a narrow clearing down to the water’s edge; the Latin sacred place is higher up, near the ruins of an old convent. The ceremony is most interesting and picturesque .  . . . Long before sunrise, about three o’clock, there is a sudden roll of kettledrums, and lights are struck all over the plain. . . . [B]y torchlight, in solemn silence, with the paschal moon hanging forward out of the deep black sky and dimming the glare of the torches, the mixed multitude presses on to the bank of the sacred river. Just after daybreak the head of the procession reaches the open space on the river’s bank, and before the sun has well overtopped the hills of Moab the first-comers are plunging in the whirling eddies of the turbid stream. (Source: Picturesque Palestine, vol. 1, pp. 165-66.) 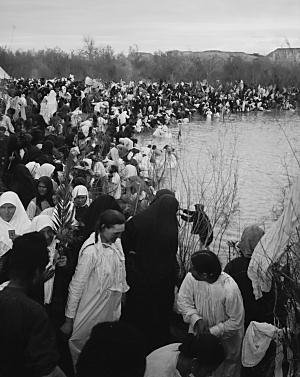 Most . . . of those who have come in families bathe in a long white garment, which after this Jordan baptism is carefully preserved till it serves as the winding-sheet of its owner. I have noticed devout families joining hand-in-hand in a circle in the water, the women having their babes slung round their neck, and reciting the creed, ducking at each sentence, while they hold on to the overhanging boughs. One remarkable feature is the number of little children and infants; but the age of the pilgrim matters not, and the Jordan baptism never needs to be repeated. Primitive and rude the scene may be called, but there is no indecorum or irreverence, and very little superstition—nothing like the ceremonies of the Church of the Holy Sepulchre. . . . Who is so utterly devoid of sentiment as not to sympathize with that pilgrim multitude? and who can look on the Eastern baptism without feeling how he has reproduced before his own eyes the scenes and the surroundings that accompanied the preaching and the baptism on this river-bank of the great forerunner, St. John Baptist. (Source: Picturesque Palestine, vol. 1, pp. 166-67.)

Jordan River South of the Sea of Galilee 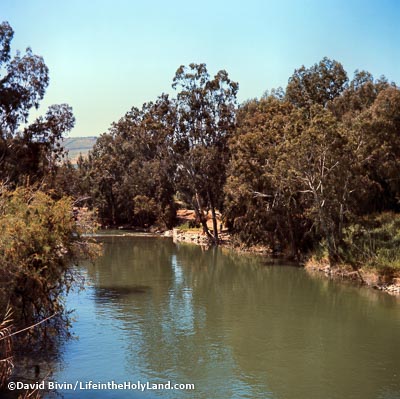 This is a view of the Jordan River from the bridge just west of the southern tip of the Sea of Galilee. Today this area, known as Yardenit, has been developed by the Israeli Ministry of Tourism as a baptismal site for the convenience of Christian pilgrims.

At BiblePlaces, see Bethany Beyond the Jordan