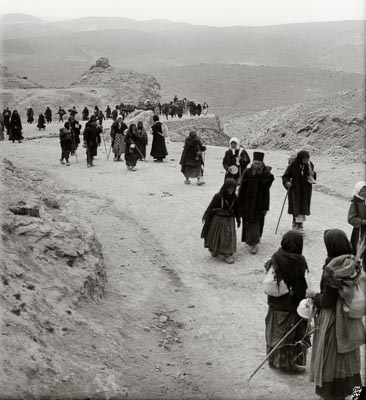 Though the road by the south brink of the Kelt is by no means the most picturesque or interesting of the passes from the upper country to the Jordan Valley, yet it has been for over two thousand years almost the only route commonly used to reach the plains. It is only a short day's ride, but the descent is most rapid and continuous. It is but thirteen miles in a straight line to Jericho, yet the fall is three thousand six hundred and twenty feet, and four hundred feet more to the Dead Sea. The road is said to be still as dangerous as when it supplied our Lord with the scene for the parable of the Good Samaritan, and no doubt the wild ravines and gorges, labyrinthic in their plans and honeycombed with caverns, afford cover for freebooters which could nowhere be surpassed. (Source: Picturesque Palestine, vol. 1, pp. 180-81.) 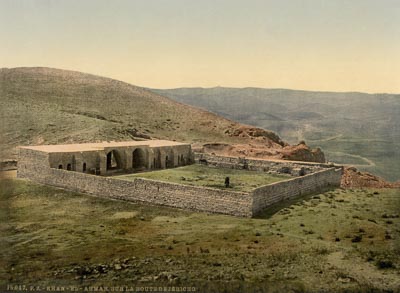 The khan of the Good Samaritan is not far from Jericho. It is a large shed with a courtyard at the back upon foundations much more ancient than the present structure. A Roman watchtower on an overlooking point near by gives a view of the approaches in all directions. All around is desolation without an inhabitant, but here one can find refreshment. Marion Harland says: "We were surprised to learn that the parable of the good Samaritan is here considered a real incident as historic as the fall of the tower of Siloam." The site of this inn is very old, and has probably borne for hundreds of years the name "of Him who showed mercy to a feudal foe." (Source: Earthly Footsteps of the Man of Galilee, p. 223.)

One passes, in going eastward, directly between rugged hills, "sad and silent heights" of white rock now and then relieved by a curious rose-colored stratum with stripes of green on the terraces where shepherds watched their flocks of sheep and goats . . . . The sudden appearance of the head or spear of a Bedouin above a pile of rock or the unsuspected encounter with a group of horsemen reminds one of the man of the parable "who fell among thieves." The Jericho road has been the dread of travelers for twenty centuries because of the lawless Arabs that infest these hills, making their strongholds, as David was obliged to do, in the eaves of the rocks high above the reach of pursuers. (Source: Earthly Footsteps of the Man of Galilee, p. 223.)

See Samaritans, Samaritan Passover, or Woman at the Well

At BiblePlaces, see Jericho or Luke 10