Authenticity of the Church of the Holy Sepulcher 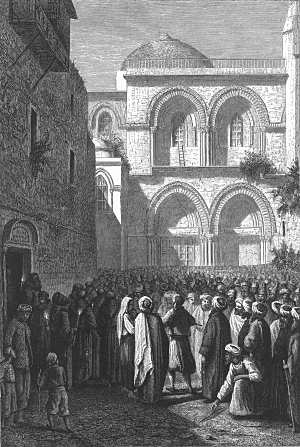 Court of the Church of the Holy Sepulcher at Easter

A discussion of the many difficult questions connected with the site of the Holy Sepulchre would be beyond the scope of the present work; it will be sufficient here to state briefly the nature of the theories which have been advanced . . . . The three principal theories are:-First, that the Sepulchre of our Lord was beneath the Sakhra "Rock," in the Haram esh Sherif, and that the noble building above it, the "Dome of the Rock," is the Church of the Resurrection erected by the Emperor Constantine in the fourth century. According to this theory, of which Mr. James Fergusson is the well-known author and able exponent, the tradition relating to the site of the sepulchre was transferred to the present tomb in the eleventh century. Second, that the Church of the Holy Sepulchre occupies the ground once covered by the churches of Constantine, and that it contains within its walls the tomb of Christ. Third, that the true sepulchre was to the north of the city without the present walls, and was never found, but that the present "Holy Sepulchre" is the tomb "miraculously discovered" by Constantine, and that over which he built his church. (Source: Picturesque Palestine, vol. 1, pp. 14.) 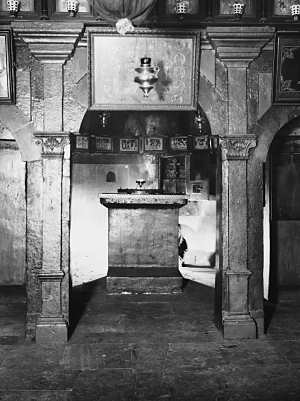 The traditional site [of Calvary] is within the Church of the Sepulchre . . . . These traditions can be traced back as far as the fourth century, when the Bordeaux pilgrim indicated the spot. Eusebius informs us that the Emperor Constantine removed an accumulation of earth and rubbish from the Holy Sepulchre and Golgotha, and built a church over them. The story of Eusebius is repeated by subsequent writers. Jerome mentions a tradition to the effect that Adam was buried in Golgotha, and that this name was given to the place because the skull of Adam was there preserved. A later tradition affirms that the blood of Christ flowed down through the rent rock, and falling upon the head of Adam restored him to life. The first to call in question the authenticity of the traditional site was Korte, a German, in 1738. He was followed by Clarke, Robinson, Tobler, and others; while Kraft, Williams, and many others, affirm the truth of the tradition. (Source: Jerusalem, Bethany, and Bethlehem, pp. 165-166.) 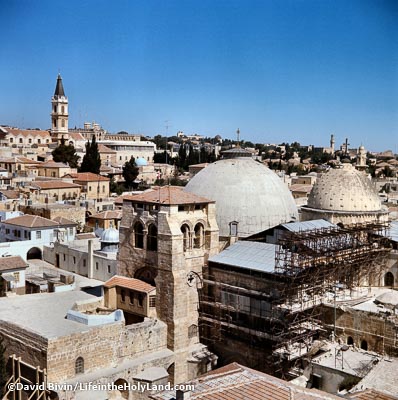 Could we guarantee the genuineness of the site and the reality of the tomb, no spot in Jerusalem would be more deeply interesting than the Church of the Holy Sepulchre . . . . The argument for the identity of the tomb with that in which the body of our Lord was laid turns mainly on the solution of two questions-one topographical, the other historical. Jesus was crucified "without the gate," "nigh to the city," at "a place called Golgotha." The sepulchre in which he was laid was "hewn out of the rock," in a garden at the place of crucifixion. This is all we know about the site. Now the Church of the Sepulchre is far within the city . . . . Thus the topographical argument appears to be decidedly against the genuineness of the sepulchre. The historical argument in favour of it, to say the least, is not convincing. It is not, in fact, until the fourth century-that is, until about three hundred years after the crucifixion-that we find any reference in history to the site; and during the interval the city had been repeatedly destroyed in war. (Source: Jerusalem, Bethany, and Bethlehem, pp. 71-72.)

At BiblePlaces, see Church of the Holy Sepulcher