Dome of the Rock, History and Traditions 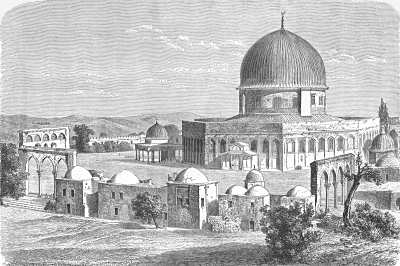 General View of the Mosque of Omar

This beautiful mosque has a meaning within and above its beauty that no other edifice can claim. It is the shelter or inclosure of the great altar of the world. It has a post of sublime interest, and one always asks oneself, "What will be the next great event in its history?" Away back in the childhood of the world Abraham climbed these heights, yet untouched by man, and laid his son, Isaac, there for an offering to the Lord, who had claimed it. After the trial was over it became the "Mount of the Lord," and the Messiah was then promised. Later the great plague that fell upon Israel was stayed at this spot--"the threshing floor of Ornan, or Araunah"-and here David saw the great angel stand between the heaven and the earth, having a drawn sword in his hand stretched out over Jerusalem. And another altar was built by David, upon which the Lord sent holy fire. A few years later Solomon laid the foundation of the Lord's house around the rock altar, and the great altar of the temple was built above the sacred spot. (Source: Earthly Footsteps of the Man of Galilee, p. 119.)  Ed. note: In the 1800s, it was commonly believed that the rock was the site of the Temple's altar. Today, it is widely held that the rock was the site of the Temple itself.

Interior of the Mosque of Omar 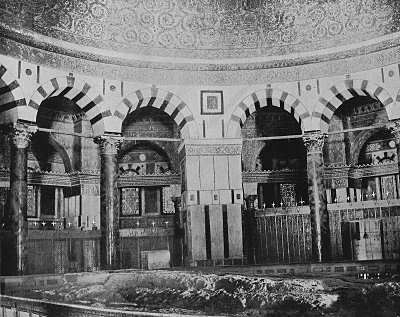 Source: Earthly Footsteps of the Man of Galilee, p. 102.

When the Crusaders converted the Dome of the Rock into their Templum Domini they formed a choir in the centre, which was probably co-extensive with the inner circle of piers and columns, and placed the high altar on the Sakhra, which was covered with marble slabs and decorated with sculptured figures in marble. The principal entrance was at that time by the western door, on passing through which the visitor had in front of him the choir, and on the left of the choir the Chapels of the "Presentation of Christ" and of "Jacob's Dream." . . . The cave was at the same time converted into a chapel, ornamented with paintings and inscriptions commemorative of the appearance of the angel to Zacharias, and of the woman taken in adultery who was brought before Jesus . . . . According to the prescribed ceremonial the king was crowned in the Church of the Holy Sepulchre; he then proceeded to the Templum Domini to offer his crown on the altar of the Chapel of the Presentation of Christ, and afterwards passed to the Templum Salomonis (Mosque el Aksa), where the Knights Templars had their residence. Whilst the repairs were being executed in 1873, several fragments of figures and other memorials were found of the occupation of the Dome of the Rock by the Crusaders. (Source: Picturesque Palestine, vol. 1, pp. 62-64.)

Rock of Moriah from Dome

Many curious traditions are attached to the Dome of the Rock. Immediately within the "Gate of Paradise" is the "Sepulchre of Solomon." A small piece of marble, called the "Flagstone of Paradise," is let into the pavement above the tomb. Into this marble Mohammed drove nails, which at certain intervals drop through to the tomb below; when they have all disappeared the prophet will come to judge the faithful. Three nails now remain perfect, and one has sunk some depth. The place has a weird interest to the Moslem pilgrim, who approaches it with cautious step, mindful of the grave advice of the attendant sheikh, "Take heed to thy footsteps, O pilgrim! lest thou shake a nail through and hasten the day of judgment." Near the west side of the rock is preserved the shield of Hamzeh, the uncle of Omar. The shield is of very beautiful workmanship, and is, perhaps, of Persian manufacture. Its face is highly ornamented with figures of birds and animals in low relief, the peacock being most prominent; but it has been flattened in and turned towards the wall to conceal the forbidden figures from devout eyes. (Source: Picturesque Palestine, vol. 1, p. 62.)

On its south-east side [of the rock] a flight of steps leads down to an excavated chamber, or cave, about six feet high . . . . In the roof is a circular hole, cut through the entire thickness of the rock, and in the floor beneath it is a marble slab covering a deep cavity, called "The Well of the Spirits." The guardian whispered to me that some learned men considered it to be the entrance to Paradise; others equally learned, the entrance to the opposite region; "but," he added, "Allah alone knows the truth." Going up the stairs again, the guardian pointed out to me, on a corner of the sacred rock, the "footprint of Mohammed," impressed as he stepped upon it to mount his horse Barak when commencing his ride to Paradise; and not far distant the "hand-print of Gabriel," who seized the rock and held it down by main force as it was in the act of rising to follow the prophet. (Source: Jerusalem, Bethany, and Bethlehem, pp. 48-51.)