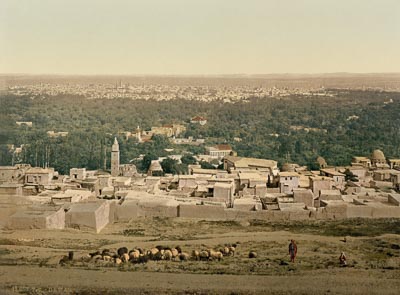 "And as he journeyed, he came near Damascus: and suddenly there shined round about him a light from heaven: And he fell to the earth, and heard a voice saying unto him, Saul, Saul, why persecutest thou me? And he said, Who art thou, Lord? And the Lord said, I am Jesus whom thou persecutest: it is hard for thee to kick against the pricks. And he trembling and astonished said, Lord, what wilt thou have me to do? And the Lord said unto him, Arise and go into the city, and it shall be told thee what thou must do. And the men which journeyed with him stood speechless, hearing a voice, but seeing no man. And Saul arose from the earth; and when his eyes were opened he saw no man: but they led him by the hand, and brought him into Damascus."--Acts, ix: 3-8. During three days Saul was without sight, and he spent this time in the house of one Judas, whither he had been led. We here give a general view of Damascus from Salahiyeh, a village lying about one mile to the northwest of the city. Damascus from this point looks like an embodied dream. (Source: Earthly Footsteps of the Man of Galilee, p. 270.) 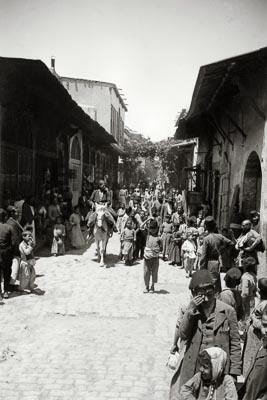 "And there was a certain disciple at Damascus, named Ananias; and to him said the Lord in a vision, Ananias. And he said, Behold, I am here, Lord. And the Lord said unto him, Arise, and go into the street which is called Straight, and inquire in the house of Judas for one called Saul, of Tarsus: for, behold, he prayeth."-Acts, ix: 10-11. The street called Straight is still the leading street in Damascus. It runs from east to west almost through the whole city. The leading carpet and silk shops are to be found on this avenue. We have here a picture of modern Damascus and the street called Straight. It is narrow, and really it is a crooked street, although called Straight. Changes have taken place within a few years, and now one may ride through the most of the street in a modern carriage—a feat which could not have been performed a decade ago. (Source: Earthly Footsteps of the Man of Galilee, p. 276.)

Source: Earthly Footsteps of the Man of Galilee, p. 277

If the pilgrim enter the city of Damascus at its eastern gate and follow the street that is called Straight to the first lane at his right, he will soon reach what the tradition calls the house of Ananias. It has been converted into a small church with a crypt and belongs to the Latins. The neighborhood is that of the Christian quarter, and has none of the signs of Oriental luxury. These are found in the Moslem and Jewish quarters. The Lord said to Ananias concerning Saul: "He hath seen in a vision a man named Ananias coming in, and putting his hand on him, that he might receive his sight. Then Ananias answered, Lord, I have heard by many of this man, how much evil he hath done to thy saints at Jerusalem."-- Acts, ix: 12-13. Of course, it would be interesting to know the precise place in which Ananias lived, and yet the knowledge of a specific locality can not add to the importance and impressiveness of an event itself . . . . We have here a picture of the modern house, secured by our artist early in the morning of May 14, 1894. (Source: Earthly Footsteps of the Man of Galilee, p. 277.) 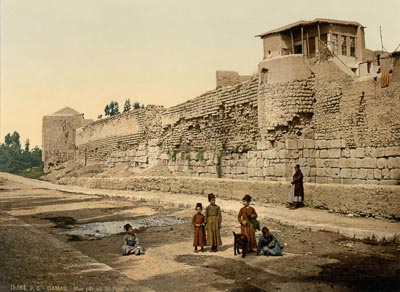 And Ananias went his way, and entered into the house; and putting his hands on him said, Brother Saul, the Lord, even Jesus, that appeared unto thee in the way as thou camest, hath sent me, that thou mightest receive thy sight, and be filled with the Holy Ghost. And immediately there fell from his eyes as it had been scales: and he received sight forthwith, and arose, and was baptized . . . .  And after that many days were fulfilled, the Jews took counsel to kill him: But their laying await was known of Saul. And they watched the gates day and night to kill him. Then the disciples took him by night, and let him down by the wall in a basket. (Acts 9:17-18, 23-25, KJV.)

The window in the wall is also pointed out through which Paul was let down in a basket .  . . . Considering the many changes which Damascus has undergone, it is, of course, impossible to rely on these traditions; but there can be no doubt about the general locality. There are several examples in Damascus of houses, built on the city wall, from the projecting windows of which it would be very easy to descend. (Source: Picturesque Palestine, vol. 2, p. 179.)