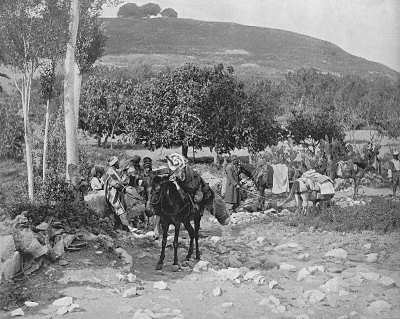 Source: Earthly Footsteps of the Man of Galilee, p. 18

We passed through the interior of Palestine with a caravan consisting of four tents, five mules, four horses and eight men, including dragoman, cook and waiter . . . . The most of our baggage was so fragile that every mile of the fifteen thousand in our contemplated journey [through Palestine, Egypt, and other countries] was attended with peril. Yet we returned safely without the loss of a day from rain, without missing a single railway or steamboat connection and without the loss of a single box of our plates. These boxes had been carried from place to place by railway cars, by express wagons, by carriages, by steamboats, by row-boats, by porters. They had been in the holds of ships, they had been strapped on the backs of mules, they had been to the pyramids, they had been over the road traveled by our Savior and His Apostles, they had followed in the footsteps of St. Paul in his missionary journeys, they had been to the city of Plato and Aristotle and the home of the Caesars. (Source: Earthly Footsteps of the Man of Galilee, 1.) 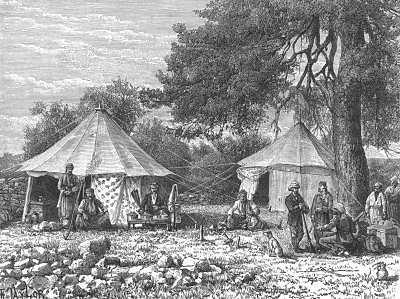 The cook had a long square iron framework in which he placed the charcoal, and about which were ovens, pans and other cooking utensils. This was the entire outfit for cooking. It was carried about day by day, and also the charcoal which furnished fuel for the fire. By means of this primitive and simple cooking appliance he was able to furnish a dinner of six or seven courses . . . . The large tent . . . is the sleeping tent. There are several partitions inside, so that we have sitting room and bed rooms, and the whole place carpeted and comfortably furnished. It was our custom in the evening after reaching camp to pin our maps to the sides of the tents, get out our books and write out our notes. (Source: Earthly Footsteps of the Man of Galilee, 190.) 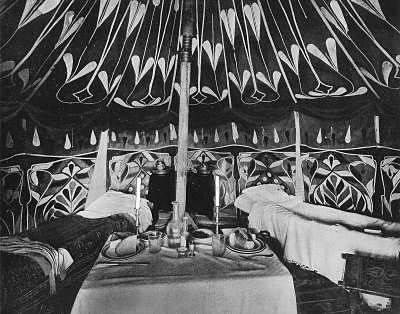 Source: Earthly Footsteps of the Man of Galilee, p. 137

Interior of Our Tent at Nazareth

After breaking camp in the morning the muleteer, cook and waiter pass ahead of the dragoman and tourists to have tents and dinner ready on the arrival of the tourists themselves . . . . There is a vast difference in the methods of travel which modern tourists enjoy to-day and the methods in vogue at the beginning of our era. Travelers now ride on English saddles and on excellent horses, sleeping at night in carpeted tents most comfortably furnished. In our party there were but two of us, the writer and the artist, and so amply were we equipped that our caravan in motion looked like a little regiment passing over the hills. This picture represents the interior of our tent. The figures you observe are bits of different and brilliantly colored calico sewed to the canvas of the tent, giving a picturesque appearance to the interior, serving as the paper does to the modern dwelling. (Source: Earthly Footsteps of the Man of Galilee, p. 137.)

Our Tent Near Bethel 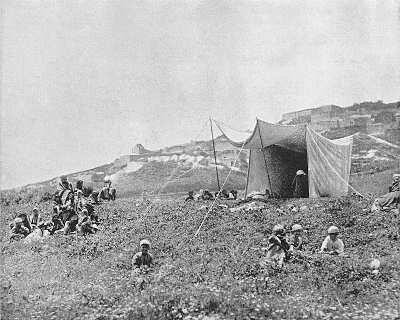 Source: Earthly Footsteps of the Man of Galilee, p. 230

Bethel, where our lunch tent was pitched on the 2nd of May, 1894, is thought to be not far from Ephraim where our Savior retired. In modern towns throughout Palestine a lunch tent is usually furnished to travelers to rest under at noon. The sunshine is generally very warm, or the wind is blowing very hard, and the tent is a great convenience. Horseback riding in Palestine is very tiresome, and after a tedious ride of four or five hours travelers are greatly refreshed by an hour's sleep, so that the dragoman keeps one of the muleteers along with the tourists, who carries the lunch tent, pillows, rugs, etc., and as soon as the party stops this tent is pitched, rugs are placed on the ground with pillows for each traveler, then, while the dragoman makes the coffee, the tourists go to sleep. (Source: Earthly Footsteps of the Man of Galilee, p. 230.)

See Camels, Travel in Desert, Travel by Sea, or Bedouin