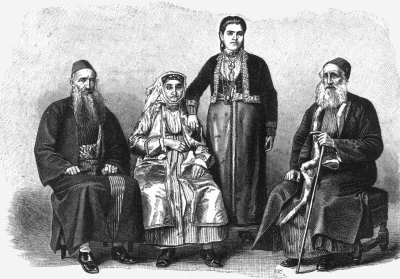 The Jews [of Jerusalem] are divided into three principal divisions, the Sephardim, the Ashkenazim, and the Karaim. Nothing can be more striking than the marked difference in appearance and costume between the Sephardim and Ashkenazim. The former are far superior in culture and manners; they have generally dark complexions, black hair, and regular features; they are fairly industrious and honest; they dress in Oriental costume, and are not wanting in a certain dignity . . . . The Sephardim speak Spanish, and trace their descent from the Jews who were driven from Spain by Ferdinand and Isabella at the end of the fifteenth century; hence their name from Sepharad, the Spain of the Rabbins. They are Ottoman subjects, and their chief rabbi, who bears the title of Hakim Bashi, is a recognised official and has a certain degree of civil authority. The Sephardim have a curious tradition that their ancestors were settled in Spain before the date of the Crucifixion, and they thus claim to be exempt from the consequences of the outcry of the Jews, "His blood be upon us and our children." (Source: Picturesque Palestine, vol. 1, p. 118.)

The Ashkenazim, on the other hand, have pale complexions and flaxen hair, from which two long love-locks hang down, one on either side of the face; and they always wear the long Eastern robe (caftan), with a hat of felt or fur . . . . The Ashkenazim are chiefly of Polish origin, they or their immediate ancestors having come from German, Austrian, or Russian Poland. They are subdivided into Peroshim (Pharisees) and Khasidim (Cabalists). The [Sephardim] accept the Talmud, whilst the [Ashkenazim] believe also in oral tradition and the transmigration of souls, study the Cabala, and in their religious worship sometimes run into wild excess. The Karaim or Karaites, who do not acknowledge the authority of the Talmud, form a small community apart from the other sects. Much has been done during the last twenty years to ameliorate the condition of the Jews at Jerusalem by Sir Moses Montefiore, Baron Rothschild, and other wealthy European Jews, and every year sums of money are sent for distribution amongst the poor. (Source: Picturesque Palestine, vol. 1, pp. 118-119.) 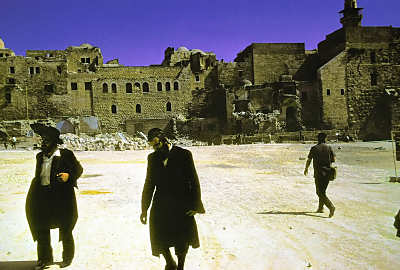 Another phase of the picture-strange, fantastic, incongruous-often meets the eye in street or market. A Jew, with pale, solemn visage, tattered fur-lined robe, and bearskin cap, stealing timidly along the path. Another, with heavy black turban, black girdle, and flowing Oriental gabardine, his hands folded, and his face the picture of suffering and sorrow. (Source: Jerusalem, Bethany, and Bethlehem, p. 68.)

Kibbutz Children at Degania B 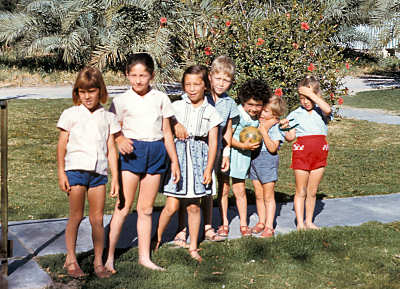 We can never understand the depth and continuity of the religious life of the Jews without remembering that from the beginning a religious atmosphere surrounded the child of Jewish parents . . . . Devotion to the law constituted, in the esteem of the Jews, the chief aim in life. Jewish parents were more concerned to give their children a knowledge of the law than they were to leave them an earthly inheritance . . . . There is no department of study that could be pursued with more profit at the present time than the national history of the Jews, especially as it respected the methods adopted by parents to bring up their children. The private and united prayers, domestic rights, weekly Sabbath, and the festive seasons were all employed with a reference to bringing up Jewish children in the knowledge of and with a true love for the lands, traditions, and institutions of their people. And it is true, even to this day, that the children of the Jews are better trained in the knowledge of the Scriptures, and in the ordinances and customs of the Jewish Church, than the children of any other people on the earth. (Source: Earthly Footsteps of the Man of Galilee, p. 110.)