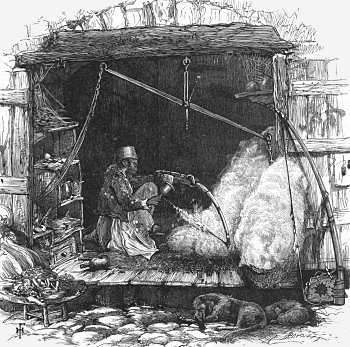 In the same neighbourhood the cotton-cleaners are found, one of whom, a Jew, is represented . . . busy at work. Cotton pods are brought to him in a sack. After weighing them, he separates the husks and seeds from the cotton with his bow-string, which he beats vigorously with his mallet. On a tray, mounted on a low stool, the seeds and pods may be seen; these will be weighed with the cotton in the presence of the owner when the task is completed. When there is sufficient space a second bow is used, and thus a double spring is obtained. The smaller bow is attached to a beam overhead, and to this is suspended a large harp-shaped bow, called a mandaf, the long string of which on being beaten into the cotton quickly converts it into fleecy clouds. The labour of holding the bow is avoided by thus suspending it, and the work is accomplished with surprising rapidity. Cotton-cleaners are frequently employed in private houses to purify and lighten mattresses and divan cushions by the same process. (Source: Picturesque Palestine, vol. 1, p. 36.) 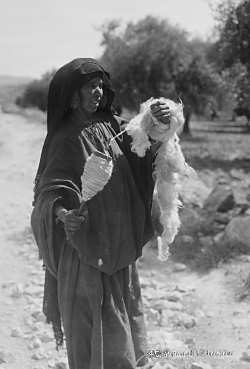 An excellent wife who can find?
She is far more precious than jewels. . . .
She seeks wool and flax,
and works with willing hands. . . .
She puts her hands to the distaff,
and her hands hold the spindle. . . .
She is not afraid of snow for her household,
for all her household are clothed in scarlet.
She makes bed coverings for herself;
her clothing is fine linen and purple. . . .
She makes linen garments and sells them;
she delivers sashes to the merchant.
(Source: Proverbs 31:10-31; ESV). 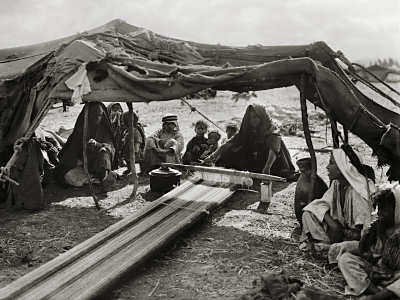 The industry of Beit Jibrîn is carpet-weaving, and all around the Crusaders' castle we saw the tops of the houses covered with women at work, turning out, with the most primitive of looms, and using their fingers as a shuttle, strips of solid and substantial carpet. Outside, all along the pathways, on either side was a sort of public rope-walk, where both weavers and dyers were at work, carefully dyeing and stretching the threads before they were woven. (Source: Picturesque Palestine, vol. 3, p. 175-76.)

Mat Weavers at Their Looms 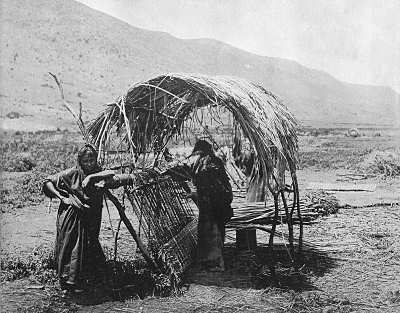 Source: Earthly Footsteps of the Man of Galilee, p. 268

After passing Roshpina, we halted for lunch at noon in sight of the waters of Merom, just above where the marsh of Huleh begins. There is here a Bedouin village, and the occupation of natives is mat-weaving. The rushes grow near by on the banks of the Jordan. Thus the Bedouins of the surrounding country are supplied with the mats which they use to carpet their tents of goats' hair. In the picture we see a very primitive loom. Some of the rushes are spread on a framework above to shelter the toiler from the heat of the sun, and we see alongside the loom the rushes ready for use in the weaving of the mat. These mats are very thick and heavy and last for many years. One of the women is resting on the framework of the loom as if posing for her picture. In this view we are looking toward the east, and it is the hour of high noon. Some of the finished mats are seen lying beyond the loom. (Source: Earthly Footsteps of the Man of Galilee, p. 268.)

See Carpentry, Potter and Pottery, Fishing and Fishermen, or Women and Work