From the shrine of Neby Sâleh the heights of Jebel Mûsa are visible. The road gradually ascends as it traverses the Wâdy esh Sheikh, and finally turns into the Wâdy ed Deir, when suddenly the great convent is revealed to view; but from this point only its high north-western wall and its extensive gardens can be seen . . . . The convent is an irregular quadrangle, enclosed by lofty walls built of blocks of granite, except the upper courses, which are composed of a mixture of granite, sand and gravel, cemented together by mud, which has acquired great hardness. The walls are protected by several towers, and the south-eastern wall is scarped. The valley in which the convent stands is so narrow at the bottom, that while its north-eastern wall runs along the water-course, the main body of the building is on the slope of the mountain, so that the southwestern wall lies considerably higher than the north-eastern. (Source: Picturesque Palestine, vol. 3, pp. 231-32.)

Ancient Way of Entering the Convent 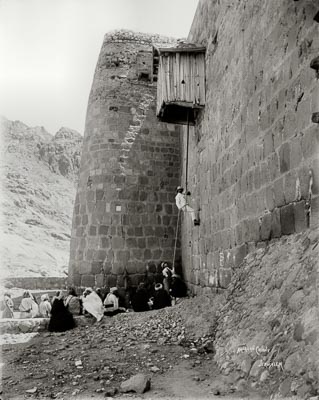 In the north-eastern wall there is a wicket gate covered with a pent-house, about thirty feet from the ground, through which travellers were formerly drawn up into the convent. As the traveller approaches its walls, his Bedawy attendants hasten forward, and standing beneath the pent-house, shout out, "Ya Mûsa! Ya Mûsa!" ("O Moses!"), this being the name of the porter now in office. Presently a turbaned head peers out, then a rope with a basket attached to it is let down; in this the letter of introduction, or pass from a branch convent, is placed, and quickly drawn up . . .  . The buttress near to this wicket was built by General Kleber, the commander of the French troops during their occupation of Egypt. A tablet let into the wall commemorates the restoration of the building by that commander. Presently an iron gate, which leads into a courtyard between the garden and the convent, is opened, and the candidate for admission is welcomed by the OEconomos, or bursar of the convent, and probably received with an embrace and a kiss. (Source: Picturesque Palestine, vol. 3, pp. 232-34.) 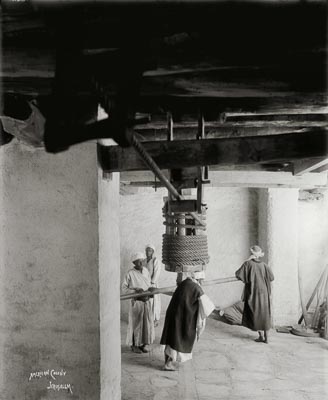 The space enclosed within the convent walls is cut up into a number of irregularly shaped small courts, by ranges of buildings running in all directions, forming quite a labyrinth of narrow winding passages ascending and descending . . . . In one of these courts there is a well with a few apricot-trees near it, in others a few flowers or vegetables are planted, and ancient vines appear in several places running over rude trellis-work. There are many isolated upper chambers approached by rickety wooden stairs or ladders . . . and apartments are perched high up, projecting over the walls at the west and south corners .  . . . A long row of cells, half of which are reserved for the use of pilgrims and travellers, are built along the north-west wall, and open into a covered corridor or gallery constructed of wood and approached by two flights of stone steps . . . . Everything bears the mark of high antiquity, being apparently the patchwork of various bygone centuries. (Source: Picturesque Palestine, vol. 3, p. 234.) 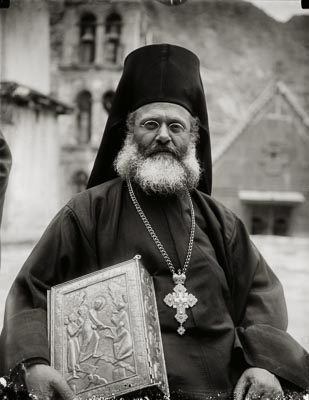 Besides the great Church of the Transfiguration which, with its handsome new bell-tower, stands in the midst of these buildings, close to a now rarely used mosque .  . . there are several small chapels or oratories dispersed over the convent, in which masses are occasionally said . . . . The library of the monastery occupies the two lower floors of a building near the church. Its greatest treasure now is the famous Book of the Gospels, dating from the time of Theodosius III., A.D. 766, written on white parchment, both sides of each sheet having two columns in golden uncial characters. It was at this convent that M. Tischendorf discovered the copy of the Bible known as the "Codex Sinaiticus." It is now at St. Petersburg, with the exception of a few leaves preserved in the University at Leipsic, and others which are lost. The New Testament is quite complete. The work has been reproduced at the expense of the Emperor of Russia, who has presented a copy to the convent library. (Source: Picturesque Palestine, vol. 1, pp. 234, 236-37.)