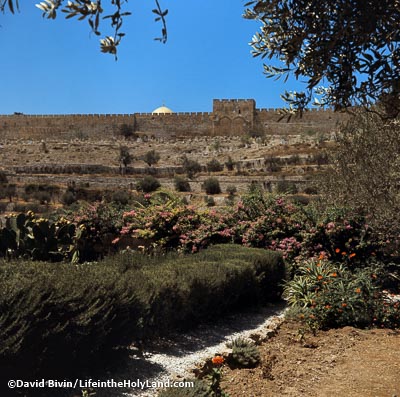 We give here a picture of the Golden Gate, because this is supposed to be the gate through which Christ entered Jerusalem. This is called in Arabic Bab el-Tabeyeh, the Gate of Repentance. It is in the east wall, and is in the center of a projection fifty-five feet long and five feet wide. The gate is double, and has semicircular arches; the entablature is sustained by Corinthian capitals, and is bent around the arch. The gate is now walled up, and the Moslems believe that they will retain possession of Jerusalem until some conqueror shall remove the obstruction from this gate and enter through the same into the city, hence this place is jealously guarded. (Source: Earthly Footsteps of the Man of Galilee, p. 232.)

The Golden Gate, Eastern Side 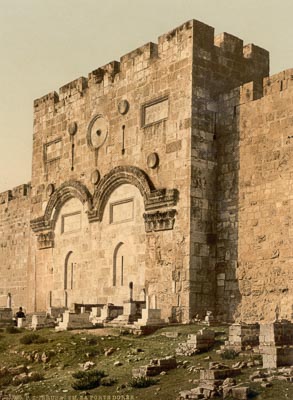 The Golden Gate, now shut up, is one of the most striking features of the eastern wall of the Haram; but the close observer can easily see that it has been inserted at a comparatively recent period. The debased Corinthian capitals that support the florid entablature of the double arch, bear no resemblance in style to the massive simplicity of the masonry on each side. The architecture of the interior towards the Haram is peculiar, having Corinthian and Ionic columns, with exaggerated capitals, supporting a groined roof. It may have been inserted about the time of Constantine, evidently, however, on the site of an older gate, the colossal monolithic jambs of which remain, and may be seen from the inside. (Source: Jerusalem, Bethany, and Bethlehem, p. 28.) 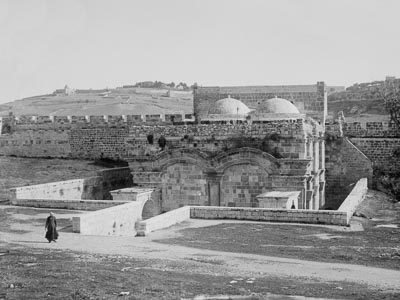 The Golden Gate, Western Side

On the east side of Haram esh Sherif is the "Golden Gate," called by Moslems the "Gate of Conversion or Penitence," and sometimes the "Gate of the Eternal" . . . . The floor of the Golden Gate is much below the level of the Haram, and the door which gives access to the interior is at the foot of a steep slope of rubbish. The roof is of comparatively late construction, but the body of the work is in a good state of preservation, the finer parts of the sculpture having been protected by a coat of plaster, which was at some time put on to conceal it. A quasi-classical cornice runs along the wall on both sides of the interior. The style is identical with that of the decorated arch over the "Double Gate," and also with the portion of an old cornice which is built into the façade of the Church of the Holy Sepulchre . . . . Externally the entire entablature, architrave, frieze, and cornice are bent, as at Spalatro, and arching from pillar to pillar-a peculiarity which is said not to be found in any building after the fourth century. (Source: Picturesque Palestine, vol. 1, pp. 69-70.)

Inside of the Golden Gate

Something modern visitors (at least non-Muslims) are rarely allowed to see: the interior of the Golden Gate structure, a considerable edifice in its own right which today houses Muslim institutions. This view is looking southeast. Visible in the back wall (left of center) are the pillars, capitals and lintel which frame one of the long-blocked outer portals. The massive but mis-matched columns and capitals suggest at least some Byzantine elements in secondary use, while the multiple vaulted domes and some of the decoration find parallels in other gates of the Haram, especially the Double Gate in the southern wall and the Gate of the Chain on the west.