Mummies of the Pharaohs of Egypt

Source: Earthly Footsteps of the Man of Galilee, p. 61

Rameses II, or Rameses the Great

What a marvel is the simple fact that Rameses is here before us in full view after all these centuries. Here is the form of a dead king photographed three thousand years after his death . . . . In 1881, near Thebes, in Upper Egypt, a wonderful collection of royal mummies was found . . . . The bodies of these kings were identified beyond doubt, and the most important of them is that of Rameses II, or Rameses the Great-the most powerful of all the Pharaohs. He was the third king of the nineteenth dynasty, surpassed by none of the ancient kings of Egypt unless it be by Thothmes III "the Alexander the Great of Egyptian history," who lived one hundred and fifty or two hundred years before Rameses the Great . . . . Rameses II was a great warrior . . . . He built temples, obelisks and cities. He was great, but egotistical and vain. He erased his father's name from many monuments that his own might be placed there. He vaunted himself as a god. He introduced polygamy into Egypt. He was brave, but boasted excessively of his bravery. With it all he was a selfish tyrant. Look at him. (Source: Earthly Footsteps of the Man of Galilee, p. 61.) 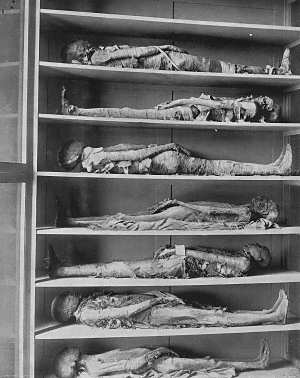 Source: Earthly Footsteps of the Man of Galilee, p. 59

It has been well said that "Egypt is a facade of an immense sepulchre." . . . According to Egyptian belief, every human being consisted of three distinct parts which during the life time were closely united: First, the body; second, the "sahu" or soul; and third, the "khu," an emanation of the divine intelligence. At death these elements may be separated but remained intact as to quantity and quality. In due course of time the "sahu" might return to the mummy. The "khu" must undergo a period of purification in the regions of the blessed and finally with the "sahu" be reunited to the dead body which its mummification had preserved from decay. "The valley of the Nile," says Miss Edward, "is the great museum of which the content are perhaps one-third or one-fourth part only above ground. The rest is all below waiting to be discovered." Numberless mummies have been taken from the mounds. The priests of the old days lie silently waiting the solution of the great mystery which they represented--grim figures "sealed from the moth and the owl and the flitter mouse." (Source: Earthly Footsteps of the Man of Galilee, p. 59.) 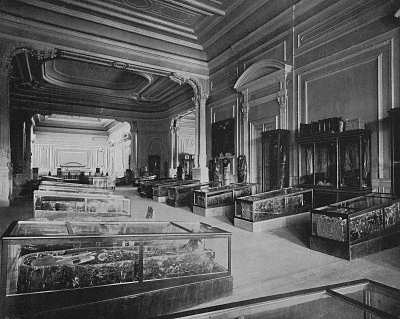 Source: Earthly Footsteps of the Man of Galilee, p. 60

Hall of the Royal Mummies in the Gizeh Museum

The Hall of the Royal Mummies contains the valuable find at Derel-Bahri (Thebes), July 5, 1881, by M. Mariette-Bey. Cases of great size were found formed of countless layers of linen cloth tightly pressed and glued together, and then covered with a thin coating of stucco. This mass of linen is fully as hard as wood, and is adorned with painted and incised ornaments and inscriptions. The principal representatives found either as mummies, or represented by their mummy cases, include a king and queen of the seventeenth dynasty, five kings and four queens of the eighteenth dynasty, and three successive kings of the nineteenth dynasty, namely: Rameses the Great, his father and his grandfather. The twentieth dynasty is not represented, but belonging to the twenty-first dynasty of royal priests are four queens, two kings and princes and a princess. All the royal mummies, twenty-nine in number, are now lying in state in the Gizeh Museum, "arranged side by side, a solemn assembly of kings, queens, royal priests, princes, princesses and nobles of the people." (Source: Earthly Footsteps of the Man of Galilee, p. 60.)