Source: Earthly Footsteps of the Man of Galilee, p. 280

DAMASCUS (usually called Esh Shâm, also Dimeshk) is one of the oldest and most remarkable cities in the world, and bursts upon the view of the traveller like a vision of paradise. It is situated at the base of the Anti-Lebanon Mountains, in latitude 33° 32´ north, longitude 36° 20´ east; one hundred and thirty-three English miles north-north-east of Jerusalem, one hundred and eighty miles south-by-west of Aleppo, and about fifty miles east of the Mediterranean, at an altitude of two thousand two hundred and sixty feet above the sea-level. It numbers about one hundred and twenty thousand inhabitants, mostly Mohammedans, twelve thousand Christians, and five thousand Jews. . . . It can be reached from Jerusalem through Samaria, Galilee, and over Mount Hermon (the Mont Blanc of Syria), in a week’s journey on horseback, and from Beirût, by the French diligence, in about fourteen hours (from 4 A.M. to 5.30 P.M.), over the splendid macadamised road of seventy miles, which was built by a French company after the massacre of 1860. The climate is delightful; in the summer the heat rises to 100° and 104°, but the nights are cool and the dews heavy. (Source: Picturesque Palestine, vol. 2, pp. 143-44.) 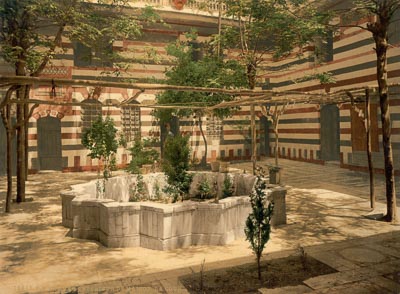 Dr. J. L. Porter, who spent several years in Damascus, says: “Damascus occupies one of those sites which Nature seems to have intended for a perennial city; its beauty stands unrivalled, its richness has passed into a proverb, and its supply of water is unlimited, making fountains sparkle in every dwelling.” The beauty of Damascus is all the more striking for the contrast to the barren desert which surrounds this oasis. The white city looks like a diamond set in the dark green of fruitful gardens. These gardens and orchards extend several miles around the city to the borders of the desert, and are a marvel of fertility. The fields of wheat and barley and beans are shaded by fruit and forest trees—the poplar, the cypress, the palm, the walnut, the citron, the pomegranate, the orange, the apricot, the fig-tree, arrayed in a rich variety of colours, laden with golden fruit, and filling the air with sweet fragrance. The soil is refreshed by perennial streams of abounding water from the mountain. A ride through these shady groves, after a journey over the barren desert under the scorching heat of the Syrian sun, is a luxury which must be enjoyed to be appreciated. (Source: Picturesque Palestine, vol. 2, p. 144.)

The inside of Damascus contrasts at first unfavourably with the outside. The streets, with few exceptions, are narrow, crooked, and filthy, and form a labyrinth which makes a guide indispensable . . . . The houses are high and generally unsightly externally . . . .  The illustrations of this chapter furnish an excellent panorama of the daily life and business of the people of Damascus. The main streets are densely crowded with passengers in all sorts of costume and colour—venerable-looking men with patriarchal beards, semi-savage Bedouins of the desert, veiled women, pedlars of fruit, carriers of water, beggars in rags, braying donkeys, growling camels, barking dogs—the scavengers of the East—men and beasts jostling against each other in endless confusion. This motley street life is at once amusing and bewildering, a moving panorama, a perpetual carnival. It is the very opposite of the sight on the Paris Boulevards, London Bridge, or New York Broadway. (Source: Picturesque Palestine, vol. 2, pp. 146, 172-73.) 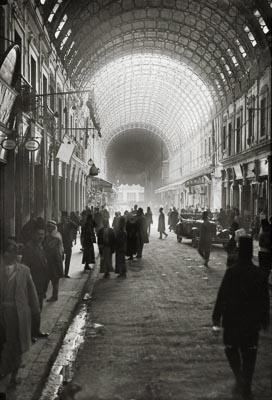 . . . even in the far East, where the currents of life are thought to be more sluggish, great centres of traffic and travel exist to-day, and have existed from the earliest times . . . . Damascus was bordered by the desert on two of its sides; yet, in regard to the matter we are now considering, it does not rank second to any city of the Old World. One great route led west to Tyre and the sea-coast. Another led south-west to Jerusalem and Egypt. Another led south through the rich countries of Bashan, Ammon, Moab, and Edom, to the Gulf of ’Akaba, passing the lines running at right-angles to it, which led to the Persian Gulf in one direction and to the Red Sea in another. A fourth route led north-west and north to the kingdoms of Karkor, Hamath, and Halman, or Aleppo. A fifth led north-east, past Palmyra to Nineveh, on the Tigris. A sixth led directly east across the desert to Babylon; while a seventh probably led south-east past Salchad, reaching the head of the Persian Gulf through the northern part of Arabia. That news, merchandise, and men from all parts of the world should be found here, would be inevitable. This would be true through all the centuries from the time of Christ back to the days of Abraham. (Source: Picturesque Palestine, vol. 2, p. 188.)