History of the Church of the Holy Sepulcher 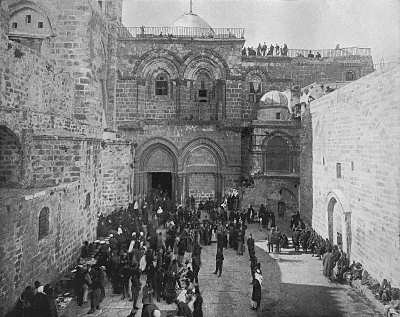 Source: Earthly Footsteps of the Man of Galilee, p. 254.

Constantine erected . . . a magnificent group of buildings, which were completed and dedicated in 335 A.D. In 614 A.D., when the Persians captured Jerusalem, the Great Basilica, or Martyrion, was wholly or partially destroyed by fire, but it was rebuilt about 626 A.D. by Modestus, Superior of the Monastery of Theodosius. The buildings . . . then consisted of the Anastasis, or Church of the Resurrection which contained the Holy Sepulchre; the Basilica, or Martyrion, a five-aisled building with a circular apse and an opening towards the east; the square Church of St. Mary; and a very large church on the east of the sepulchre, called the Church of Golgotha. In 936, and again in 969, when the Fatimite Caliphs gained possession of the city, portions of the churches were damaged by fire; and in 1010 they were partially destroyed by El Hakim, the third Fatimite Caliph. This wild fanatic commenced a systematic persecution of the Christians, drove them from their churches, and even attempted to destroy the Holy Sepulchre. (Source: Picturesque Palestine, vol. 1, pp. 14-15.)

Church of the Holy Sepulcher, Door Being Locked

About the middle of the eleventh century the Christians began to return to Jerusalem (1048 A.D.) and commenced the rebuilding of the churches . . . . During the last half of the eleventh century Jerusalem fell under Turkish rule, and the Christians were much oppressed; they were robbed and maltreated even whilst worshipping in their churches, and the pilgrims had to submit to every species of insult. Among those who suffered was Peter the Hermit, whose burning eloquence on his return to Europe roused the indignation of Western Christendom and brought about the First Crusade. On the 15th July, 1099, the Crusaders captured Jerusalem, and, after putting to death most of the Turkish population, entered the Church of the Holy Sepulchre barefooted and singing hymns of praise. They soon, however, found the building too insignificant, and commenced to remodel it and add new shrines. (Source: Picturesque Palestine, vol. 1, p. 15.)

The Shrine of the Holy Sepulcher

When Saladin took the city in 1187, and also in 1244, when the Christians were finally driven from Jerusalem, the church and the sepulchre were injured, but with these exceptions the buildings remained nearly in the state in which the Crusaders left them until the great fire of 1808. The church, except the eastern portion, was almost entirely destroyed; the dome fell in, crushing the Chapel of the Holy Sepulchre; the marble columns of the Rotunda were cracked and calcined; images, altars, pictures, were consumed in the general conflagration; and there was a mass of ruin from the Chapel of Helena to the rock-hewn tomb of Joseph of Arimathaea. In the intrigues which followed at Jerusalem and Constantinople in connection with the rebuilding of the church, the Greeks secured for themselves the greater portion of the buildings . . . . The work was completed and the renovated church consecrated in 1810. (Source: Picturesque Palestine, vol. 1, p. 15.)