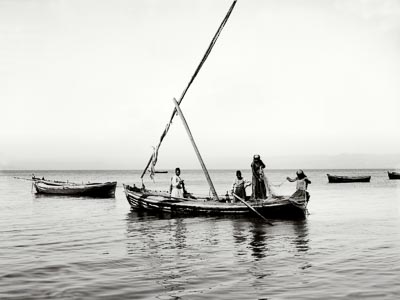 Fishermen on the Sea of Galilee

These boats are built in Beirût, or some of the coast towns, and transported in sections to Tiberias, and there put together. They are made for carrying burdens, but when there is a good breeze considerable speed is obtained. If, however, those who manage them have to depend upon oars, their progress is aggravatingly slow. But in Christ’s time the sea was covered with ships and boats engaged either in fishing or traffic, or carrying parties of travellers or of pleasure-seekers from shore to shore. The Talmud speaks of “merchants coming and going between Hippos on the east shore and Tiberias,” which indicates a lively and constant intercourse of the inhabitants of the cities on the different sides of the lake. (Source: Picturesque Palestine, vol. 2, pp. 70-71.)

Sea of Galilee with Fishing Boats 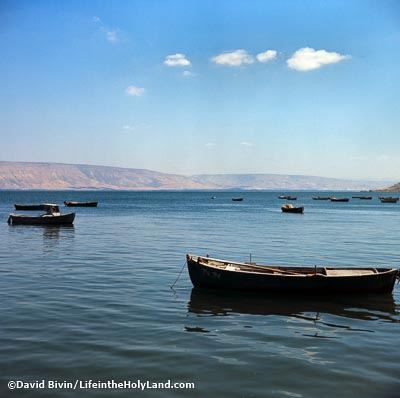 But the fish and the fisheries of the Sea of Galilee had then [during the time of Christ] a world-wide reputation. The choicest kinds abounded in this lake, and some varieties existed here similar to those found in the Nile. Tarichæa was noted for its extensive “fish-factories,” and from the business of fishing more than one of the towns upon the shore are said to have derived their names. People came hither even from Jerusalem, especially just before the great feasts, to fish in these waters, and thus provide means of support for the multitudes that, on those occasions, flocked to the Temple. The Jews distinguished sharply between clean and unclean fish, which custom may be referred to in the words of our Lord, “They gathered the good into vessels, but cast the bad away” (Matt. xiii. 48).  (Source: Picturesque Palestine, vol. 2, p. 80.)

Source: Earthly Footsteps of the Man of Galilee, p. 184

A little way from the lake, in the Town of Tiberias, we came upon a group of men sitting in the shade of one of the stone buildings preparing, as we see in the picture, a fisherman's net. It was in this way that the fishermen made their nets in the early ages. The fisherman of the Sea of Galilee represents the highest class of men living on the lake. They are sincere and have force of character. They live much in their boats, plying their oars, and take sufficient exercise to make them vigorous and healthy looking. The ancient fishermen were not learned men, but they were earnest, robust, fair-minded and holy . . . . The first men to whom Jesus offered "the bread of life" were fishermen. Four, at least, of His apostles were fishermen. (Source: Earthly Footsteps of the Man of Galilee, p. 184.)