The Great Temple at Karnak

This represents the great temple of Amen-Ra from its first pylon to the sanctuary; the hall of Thothmes behind is not included for lack of space . . . .  In front is the sacred lake; at the left we see a glimpse of the Nile, with the Libyan hills beyond. The first pylon is clearly seen next to the palm-trees, with its holes for the wooden brackets to which the flagstaffs were fastened. This pylon is one hundred and forty feet high and three hundred and seventy feet broad. Before it stood granite colossi, now hurled down, defaced, and buried in the sand. Between this and the second pylon, which is indicated by a jutting piece of masonry in the engraving, stretches the great peristylar court (two hundred and seventy-four feet by three hundred and twenty-nine feet), with a colonnade at each side and a double row of columns down the middle, of all which very little remains. A small temple (of Rameses III.) projects through the south wall (towards the spectator in the engraving), and another, of Seti II., stands in the north-west corner of the court. The ruined second pylon leads into the famous “Hall of Columns,” several of which are seen in the centre of the engraving . . . . (Source: Picturesque Palestine, vol. 4, pp. 211-14.) 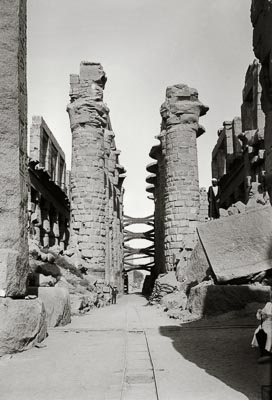 . . . the famous “Hall of Columns” of the great temple of Karnak, . . . is the largest hall in Egypt (three hundred and forty by one hundred and seventy feet, and in the centre seventy-six feet high), and its one hundred and thirty four columns are among the wonders of the world. Twelve of them, forming a central avenue, are thirty-three feet in circumference, or as bulky as Trajan’s column, and a hundred men could sit on their enormous bell-shaped capitals. The one hundred and twenty-two side columns are shorter, and form aisles, above which the central nave projects with a kind of clerestory of grated stone windows. It is said that the entire cathedral of Notre-Dame at Paris could stand upon the ground occupied by this one hall at Karnak. . . . This is really the only approximately complete part of the Great Temple; and, even here the roof is off, the columns are partly fallen, and the grated windows of the clerestory are broken in. (Source: Picturesque Palestine, vol. 4, pp. 206, 214.) 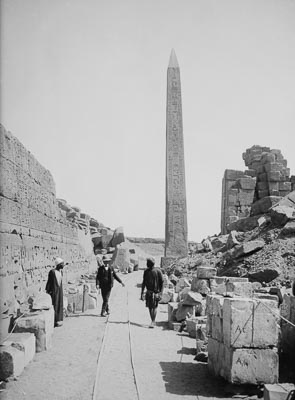 Beyond the Hall of Columns . . . is a wilderness of ruins, representing a hall of Osiride figures, the sanctuary, and surrounding chambers; while further back is what remains of the temple of Thothmes III., containing various indistinguishable divisions. Amid this chaos are the obelisks, two upright and two fallen, the shorter ones bearing the name of Thothmes I., and the taller (indeed the tallest known—one hundred and nine feet) that of Hatasu, his daughter, the builder of Deyr El-Bahry. Round about are the remnants of the Osiride court, the granite sanctuary, and the so-called proto-Doric columns of Osirtasen I. (Twelfth Dynasty) behind it. As one stands amid the wilderness of fallen stones, broken obelisks, mutilated statues, the single emotion is wonder, not so much at how these huge buildings were set up, but how they came to be thus destroyed. Nothing short of a terrific earthquake, one would say, could have overthrown Karnak; yet the slow and irresistible sapping of the foundations by the Nile may account for a great deal of the ruin. The brown river-stained bases of the columns in the great hall warn us that the time may come when even what remains of Karnak may be overturned. (Source: Picturesque Palestine, vol. 4, p. 214.) 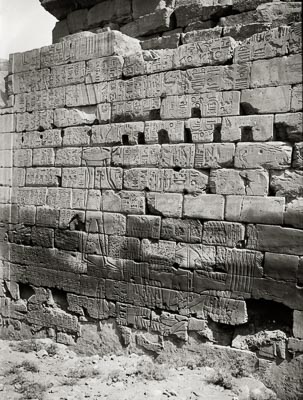 In spite of its ruined state, Karnak presents many exceedingly interesting wall-pictures. In one place we see Seti I. making war upon the nations of Asia, compelling the Armenians to cut down their forests in their conqueror’s behoof, driving his chariot among the fleeing Shasu, or Bedouins, showering his arrows upon the Kharo, dragging home in triumph the prisoners taken in his campaign against the Assyrians, warring with the Khetas (Hittites), and holding the captives of all nations by the hair of their heads while he offers them as victims to Amen-Ra. In another place is the famous epic of Pentaur, with Rameses charging the foe single-handed; and on the outside of the south wall of the Hall of Columns is depicted the campaign of the “Shishak” of the Bible against Palestine. Shishak appears about to slay a row of suppliant prisoners, and behind is the long series of the Levite cities, each represented by a man hidden, all but his head, behind a cartouche containing the name of the place . . . . The walls of Karnak, indeed, even more than those of most temples, form an historical library of priceless value and interest. (Source: Picturesque Palestine, vol. 4, p. 214.)