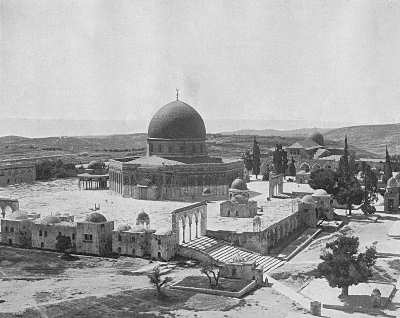 Source: Earthly Footsteps of the Man of Galilee, p. 233.

The Site of the Temple

The Haram area is an artificial platform on the top of Moriah, sustained on all sides by walls of great strength and vast antiquity . . . . [O]n it the Temple was built, in whose shrine the glory of the Lord so often appeared, and in whose courts the Son of God so often taught. On it now stands the Great Mosque, called, from the bare rocky crown of Moriah within it, The Dome of the Rock. . . . In the centre, on a raised platform of white marble, is the octagonal mosque, incrusted with encaustic tiles of gorgeous colours, and surmounted by a graceful dome. From the platform the ground slopes to the cloisters on the encircling ramparts, in gentle undulations of green turf, ornamented with marble arcades, gilded cupolas, fountains, and prayer-niches. At the southern end is the Mosque el-Aksa . . . . The quiet seclusion of the Haram, the rich green of its grass and foliage, the dazzling whiteness of its pavements and fountains, the brilliant tints of the central mosque, and, above all, its sacred associations, which even Muslem fanaticism and blasphemy cannot destroy, make it one of the most charming and interesting spots on earth. (Source: Jerusalem, Bethany, and Bethlehem, pp. 22-25.) 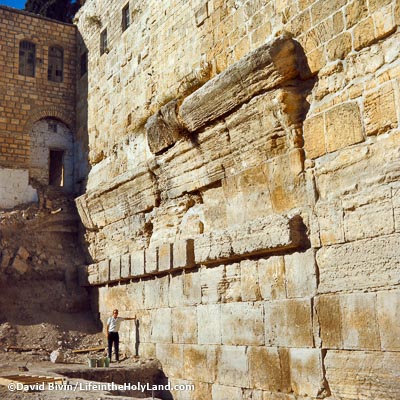 Thirty-nine feet north of the south-west angle is the fragment of an old arch known as "Robinson's Arch," from the fact that it was first brought to notice by the eminent American, Dr. Robinson . . . . The arch is fifty feet long, and it had a span of forty-two feet. Portions of the three lower courses, in which are stones from nineteen to twenty-five feet long, alone remain, and these, from the appearance and position of the stones, evidently formed part of the original wall. The remaining stones of the arch were found lying, just as they fell, on a pavement of polished stone, more than forty feet beneath the surface of the ground, and near them a portion of the pier was also discovered . . . . The position of "Robinson's Arch," and its dimensions, seem to indicate that it formed the first of a series of arches which supported a broad flight of steps leading from the Tyropoeon Valley to the centre aisle of the Royal Cloisters, "Stoa Basilica," which ran along the south wall of Herod's Temple. The arch may also mark the position of the fourth gate on the western side of the Temple, which Josephus says "led to the other city, where the road descended down into the valley by a great number of steps, and thence up again by the ascent." (Source: Picturesque Palestine, vol. 1, pp. 38-39.) 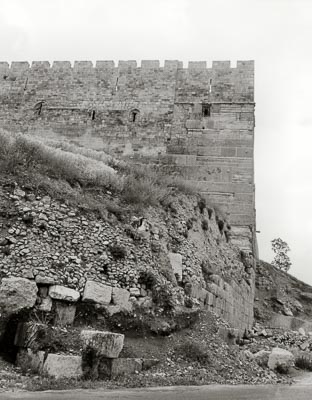 South-East Corner of the Temple Mount

The south-eastern angle stands on the very edge of the ravine, and is in many respects one of the most interesting relics of ancient Jerusalem. The wall rises to a height of seventy feet above the present surface of the ground; and its lower and more ancient section consists of fourteen layers of bevelled or drafted stones, averaging about three feet six inches in height, and some of the corner-stones measure twenty feet in length. The excavations of the English engineers reached the foundation upon the rock at a depth of seventy-seven feet . . . . The lowest stone is partly embedded in the rock, on the top of a cliff. And we read, in the history of Josephus, that in Herod's time a lofty tower stood on top of the angle . . . . Josephus thus describes the tower, and its enormous height above the bottom of the Kidron: "If any one looked from the top of the battlements down both those altitudes, he would fell giddy, while his sight could not reach to such an immense depth." . . . The entire height, from the summit of the corner tower to the bottom of the ravine below, could not have been less than three hundred feet. (Source: Jerusalem, Bethany, and Bethlehem, pp. 29-30.) 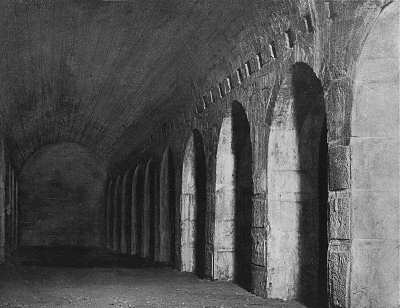 Source: Earthly Footsteps of the Man of Galilee, p. 238.

The view which we present on this page represents the vaults under the temple area. They are called Solomon's stables. Just why, nobody knows. The first distinct account of these stables is given by a tourist about 1772. A traveler mentions them as capable of holding two thousand horses. It is probable that they were used in the time of the Crusaders as stables. The floor of this vault is a little over thirty-eight feet below the level of the pavement above. The semicircular arches are eleven feet five inches in span and five feet nine inches in height. The aisles open from the south to the north. While these vaults are not supposed to date earlier than the Byzantine period, the stones of which they are constructed evidently belonged to buildings of an earlier period-- as far back as Herod, and perhaps Solomon. Many Jews sought refuge in these subterranean vaults during the struggle against the Romans. They were used also in the Middle Ages by the Crusaders. (Source: Earthly Footsteps of the Man of Galilee, p. 238.)