Down the centre of the plain winds a ravine, from two hundred to three hundred yards wide, and from fifty to one hundred feet deep. Through this ravine the Jordan flows in a still more tortuous course—now sweeping closely along the western, now turning abruptly to the eastern bank. Its curves are often sharp, and not unfrequently it doubles back. . . . The river has thus two distinct sets of banks. The inner banks confine the stream; they are of soft alluvial soil, and are ordinarily from five to ten feet high; but the height decreases when the river is in flood, and in spring they are usually overflowed. The outer banks are much higher and less regular; they in fact confine the whole gorge. . . .  The current is everywhere very rapid, and though flowing through a comparatively level plain, it falls more than six hundred feet between the Lake of Tiberias and the Dead Sea. Lynch, who navigated the whole distance in a boat, thus explains the secret of its almost incredible fall:—“In a space of sixty miles of latitude, and four or five of longitude, the Jordan traverses at least two hundred miles. We have plunged down twenty-seven threatening rapids, besides a great many of lesser magnitude.” (Source: Galilee and the Jordan, pp. 66-69.) 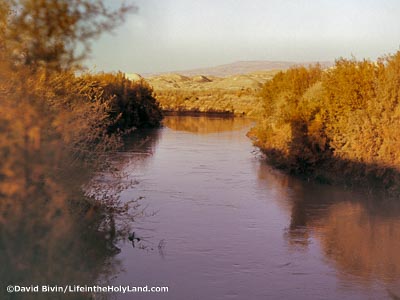 As we contrast this muddy, turbulent torrent, rushing unprofitably along its deep-cut channel, with the clear bright waters of Damascus, which spread fertility and prosperity wherever they come, it is easy to understand the scornful words of Naaman the Syrian: ‘Are not Abana and Pharpar, rivers of Damascus, better than all the waters of Israel? . . .’ Like the Dead Sea, the physical phenomena of the Jordan are absolutely unique. Emerging from the Sea of Galilee at a probable depression of six hundred feet below the level of the Mediterranean, it rushes along a narrow fissure of sixty miles in length; but doubling and winding as it goes, its actual course is two hundred miles. . . . No river famous in history is so unproductive and useless. Like the Upper Rhone, its rapid torrent and its sudden violent floods, make it an object rather of dread than delight to the dwellers on its banks. Yet, even in these physical characteristics, we can see its admirable adaptation to the Divine purpose. The Israelites were to be cut off from intercourse with the licentious idolaters on the east bank of the Dead Sea. (Source: Those Holy Fields, p. 72.)

Banks and Terraces of the Jordan

[C]lose to the river’s bank we descend fifty-five feet into a dense thicket of tamarisk, silver poplar, willows, terebinth, and many other trees strange to European eyes, with a dense and impenetrable undergrowth of reed and all sorts of aquatic brushwood. This is perforated in all directions by the runs of wild boars, which literally swarm here, while the branches are vocal with myriads of birds—nightingales, bulbuls, and especially turtle-doves—which meet here and find abundant food in the herbage of the trefoil, astragalus, and other characteristic plants of the higher plain. In ancient times beasts more formidable than the wild boar had their lair in these coverts, and when driven out by the periodical swellings of Jordan the lion and the leopard sought their prey among the flocks of the villagers in the country above. The leopard still lingers in these thickets, and an observant traveller cannot explore far without coming on its traces, especially on the east bank. But the lion, though not extinct in the times of the Crusades, has long been exterminated from the region west of the Euphrates. (Source: Picturesque Palestine, vol. 1, pp. 164-65.) 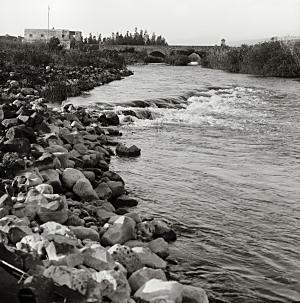 There are but two old bridges spanning the Jordan. Dangerous as the river is, it offers an extraordinary number of fords. Dr. George Adam Smith describes the Jordan as a "rapid, muddy water with a zigzag current, and the depth varies from three to ten or twelve feet in the sixty-five miles of descent." . . . To cross a ford of the Jordan is a common occurrence still. Dr. Thomson says: "What a strange and treacherous condition of things!" speaking of the ford in front of his camp. "Just there it is broad and not more than four feet deep, so that the villagers were continually fording it; men, women, children, returning home from their fields to the east of the Jordan; a rural scene curious as rare. Sheep, goats and even donkeys had to swim, and it required the constant care of the shepherds to prevent their being carried down the stream together. Cattle and horses came boldly across and so did the men, but the women and children needed the help of the men, who brought them safe to shore." (Source: Earthly Footsteps of the Man of Galilee, p. 221.)

Such is the Jordan, which, in its physical features, its history both sacred and civil, and in its connection with stupendous miracles, is unquestionably the most interesting and remarkable river in the world. Throughout its entire course from the Sea of Galilee to the Dead Sea, not only the river itself, but the great valley through which it runs, is far below the level of the ocean. Were the waters of the Mediterranean let into the valley by any means, the whole would be engulfed—at Tiberias to a depth of seven hundred feet, and at the shore of the Dead Sea to no less than thirteen hundred feet. The valley, from the base of Hermon on the north to the watershed opposite Petra on the south, would become a great inland sea nearly two hundred miles in length, by from ten to twenty miles in breadth, and all the sacred and historic sites in it would disappear for ever, like the cities of Sodom and Gomorrah. (Source: Galilee and the Jordan, p. 169.)