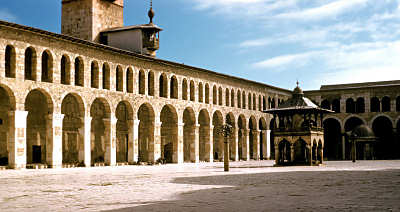 The largest and most ancient mosque in Damascus is the Jami’a el Amwy, “The Great Mosque of the Omeiyades,” which ranks only next in importance to the sanctuaries of Mekka, Medina, and Jerusalem. “Amwy” literally translated means “the little slave-girl.” . . . This mosque (to which strangers are admitted on payment of a fee) occupies the site of many former and important structures. A Roman temple which stood here was, towards the close of the fourth century, converted into a Byzantine basilica dedicated to St. John the Baptist. It is said that his head was enclosed in a casket of gold, and preserved in a cave or crypt beneath the building. On the capture of Damascus by the Saracens in 634, they took possession of the east end of the basilica, and Christians and Muslims for many years worshipped under one roof. It was not until the commencement of the eighth century that the whole building was seized by Wêlîd I (the fifth of the Omeiyad khalifs), and converted into a mosque. He did not, however, destroy the outer walls, but enriched them with costly mosaics of gold and precious stones and glass. (Source: Picturesque Palestine, vol. 2, pp. 148-49.)

Minaret of the Bride 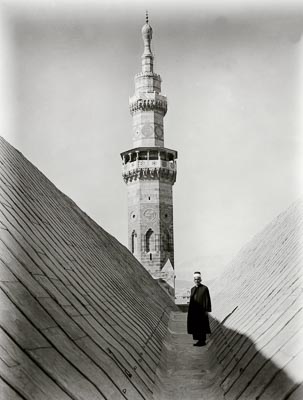 In its present state it consists of a quadrangle four hundred and eighty feet long by three hundred and twenty-four feet wide, surrounded by a lofty wall of fine masonry. The northern part of the quadrangle is an open court paved with limestone, with slabs of marble of various colours introduced at intervals. There are cloisters round three sides of it, supported on arches resting on columns of reddish-coloured stone, some of which are cylindrical, but the greater number are square and decorated with Byzantine and Arabesque ornament in low relief . . . . At the east end there is an elegant little building called the “Dome of the Hours.” At the west end of the court stands the “Kubbet el Khazneh” (Dome of the Treasures), . . . The sanctuary of the mosque occupies the southern portion of the great quandrangle, but is only separated from it by a row of columns now encased in masonry. . . . This celebrated mosque has three tall minarets, and they and its great dome and lofty walls are the most prominent objects in every general view of Damascus. (Source: Picturesque Palestine, vol. 2, pp. 149-50.)

A portico of granite pillars, of the Corinthian order of architecture, extends round three sides of the court, and on the fourth side stands the mosque. The interior is plain; it is divided into three long aisles by rows of handsome granite Corinthian columns, and a large dome surmounts the centre of the building. It is said to have been erected by the emperor Heraclius, and there can be little doubt but that it was in existence as a church before the capture of Damascus by the Saracens, from the order of architecture. The Turks call it the Mosque of St. John Baptist. (Source: Addison 1838: 111.)

Inscription on the Bridge 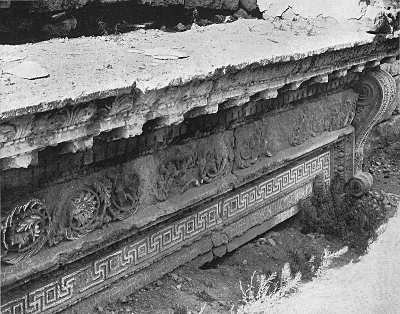 Source: Earthly Footsteps of the Man of Galilee, p. 279

But it is on the south side of the mosque that the most remarkable relics of former structures exist. To obtain a view of this portion of the building it is necessary to mount on to the roof of the silversmith’s bazaar . . . from which point can be seen, near the transept, a disused but magnificent doorway, with a small one on each side of it. They are richly decorated with sculptured scroll-work, somewhat similar in design and execution to that of the great gateway of the Temple of the Sun at Ba’albek . . . . This was probably one of the triple portals of the Roman temple, subsequently used by the Christians as an entrance to their basilica, for on the upper beam of the central doorway there is an inscription in Greek which evidently formed no part of the original design, and to introduce it a moulding has been cut away . . . The sculptured words, well indicated in the illustration, are from the Septuagint version of Psalm cxlv. 13: “Thy kingdom, O Christ, is an everlasting kingdom, and thy dominion endureth throughout all generations”— the words O Christ being interpolated. There is no record as to the time or occasion when the verse was inscribed here. Few Muslims seem to be aware of its existence, and fewer still of its significance. (Source: Picturesque Palestine, vol. 2, p. 153)

1838 Damascus and Palmyra: a Journey to the East. Vol, 2. London: Richard Bentley.