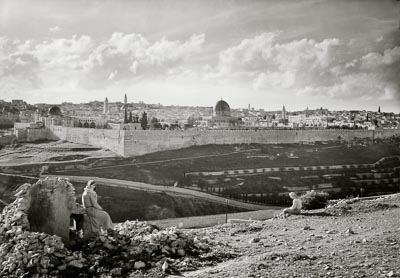 Jerusalem from the Mount of Olives

From the Church of the Ascension the ground shelves down to the dry bed of the Kedron and then rises steeply to the summit of Mount Moriah, on which is now situated the Haram esh Sherif. The surface of the Haram enclosure is studded with cypress and olive, and its sides are surrounded, in part, by the finest mural masonry in the world, capable, even in its decay, of affecting men's minds more strongly than any other building of the ancient world. At its southern end is the Mosque el Aksa and a pile of buildings formerly used by the Knights Templar. Nearly in the centre is a raised platform paved with stone, from the centre of which rises the well-known "Dome of the Rock" (Kubbet es Sakhra) . . . . Within this sacred enclosure stood the Temple of the Jews, but all traces of it have long since disappeared, and its exact position has for years been one of the most fiercely contested points in Jerusalem topography. (Source: Picturesque Palestine, vol. 1, pp. 4-6.)

Source: Earthly Footsteps of the Man of Galilee, p. 195.

The Haram esh-Sherif, the "Noble Sanctuary," is the pride and ornament of the City of Jerusalem." The massive and lofty walls that surround it, the broad, elevated platform, encircled by graceful arches, its pulpits and prayer-niches and cupolas; and the beautiful Mosque of Omar, rising above all and glistening in the sunbeams; the marble fountains, groups of olive and cypress trees, all together form a picture which is scarcely surpassed in the world . . . . With no other escort but our Mohammedan guide, we entered the jealously guarded precincts of the Haram, and were conducted down a gradual decline for some distance over smooth rock, and then upon the sward or green grass to the foot of a flight of steps which led up to the lofty and pointed arches which stood on the paved platform of the mosque called el-Mawazin, or "the Scales," because on the day of judgment the scales are to be suspended there to weigh the evil and the righteous. In the picture we are looking toward the north, and beyond the walls see the hills of Judea. (Source: Earthly Footsteps of the Man of Galilee, p. 195.)

Source: Earthly Footsteps of the Man of Galilee, p. 260.

Mount of Olives from Temple Plateau

At one corner the solid masonry rises to a height of one hundred and eighty feet, at another to a height of one hundred and thirty-eight feet, above the ground; and at one point in the wall a great stone, thirty-eight feet nine inches long, four feet high, and ten feet deep, has been used at a height of eighty-five feet from the surface. Partially concealed as the walls are, here by ninety-five feet, there by sixty feet of rubbish, they still fill the traveller with admiration, and they must, when fresh from the builder's hands, have been the finest specimens of mural masonry in the world . . . . The Haram esh Sherif has a general elevation of two thousand four hundred and nineteen feet above the Mediterranean, and its surface is almost level . . . . It has been formed by cutting the rock away in some places, by building supporting vaults in others, and by filling in hollows with large stones and rubbish. The dimensions are-north side, one thousand and forty-two feet; east side, one thousand five hundred and thirty feet; south side, nine hundred and twenty-two feet; and west side, one thousand six hundred and one feet. The enclosure contains thirty-five acres, and is nearly one mile in circuit. (Source: Picturesque Palestine, vol. 1, pp. 38, 51.)

This fascinating photograph (looking northwest) shows a room lying beneath the surface of the Temple Mount (to Muslims, the Haram esh-Sharif, or “Noble Sanctuary”). This space was the subject of several descriptions and drawings by 19th century explorers but has rarely been seen by Westerners—or photographed. Much better known, actually, is the opposite side of the thick wall seen here at the end of the vaulted room: it is the massive lintel and blocked opening of an original western entrance of the Herodian Temple Mount, the so-called “Barclay’s Gate” partially visible in the very southern end of today’s Western Wall (women’s prayer area).