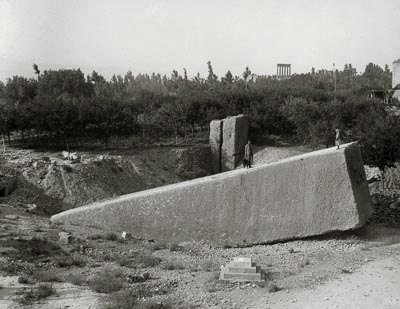 The Large Stone in the Quarry, Ba'albek

We reached the outskirts of Ba'albek at noon, and paused to survey the scene. At our feet were the quarries from which the great hewn stones of yonder temples were taken. In front were the green gardens and groves of Ba'albek, watered by the great fountain, Râs el 'Ain. One-third of a mile to the north, above the poplar and mulberry orchards, rose the stately walls and columns of the matchless temples of the Ba'albek Acropolis. The Great Stone, as it is called, lies in the quarry, hewn smooth on the top, the sides, and south-east end, the west end not yet being detached from the native rock . . . . On the under side it is cut away, remaining attached to the bed rock in the middle along its entire length. This is called by the Arabs the "Hajr el Hûbla," or stone of the pregnant woman, and is the wonder of architects, scholars, and practical men from all parts of the world. It is sixty-eight feet four inches in length, seventeen feet in width, and fourteen feet seven inches in height. It is computed to contain thirteen thousand cubic feet, and to weigh more than eleven hundred tons, or two million two hundred and seventy thousand pounds. (Source: Picturesque Palestine, vol. 2, pp. 215-216.) 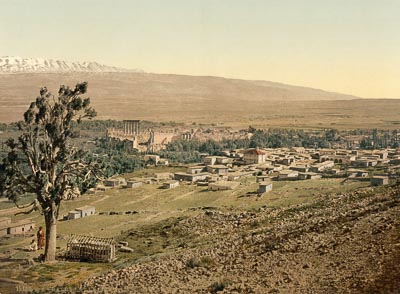 The plain on which the ruins stand is level, forming the outlet of the fine stream which runs down to the Sahlet Ba'albek from the fountain Râs el 'Ain, half a mile distant to the south-east in a valley of Anti-Lebanon. The ruins stand on a platform of titanic masonry evidently of Phoenician origin, about one thousand feet in length, six hundred feet broad, and varying in height from fifteen to thirty feet. This prodigious mass of masonry is composed of large cut stones, the smaller of which are from twelve to thirty feet in length, nine feet broad, and six feet thick; and three, on the west side, are the celebrated "Three Stones," which gave the temple the name trilithon. One of them is sixty-four feet long, another sixty-three feet eight inches, and the third sixty-three feet; in all one hundred and ninety feet eight inches, and they are thirteen feet in height, and not less than this in thickness . . . .The ancient walls of the city of Ba'albek were some two miles in extent, but hardly a trace of them now remains, excepting on the south-west side, where its shattered towers and battlements stand out on the hillside in bold relief against the sky. (Source: Picturesque Palestine, vol. 2, pp. 218, 229.) 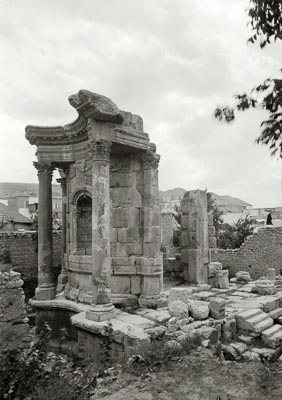 Temple of Venus, or Circular Temple

The Temple of Venus, or Circular Temple . . . , stands about one hundred and fifty yards from the south-east angle of the Temple of the Sun. It is a beautiful little Corinthian structure, circular within and without, with handsome niches at regular intervals each flanked by two columns, so as to gave the building the appearance of an octagon. Wreaths hang gracefully from the cornice over each niche. The cella is thirty-eight feet in diameter. The number of columns is six, each nine feet distant from the wall. The entablature supported by these projecting columns does not run continuously from column to column, but recedes in a graceful curve almost to the wall of the cella, giving the whole an appearance of lightness and elegance rarely equalled. It is looked upon as the gem of Ba'albek. In the days of Maundrell it was used as a Greek Church, although seriously shattered by earthquakes . . . . The Greeks no longer worship in it, but it is still beautiful, even in decay. It is now called "El Barbara," in honour of St. Barbara. (Source: Picturesque Palestine, vol. 2, p. 228.) 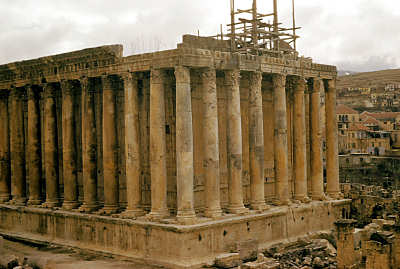 The most ancient allusion to Ba'albek is in the prophecy of Amos i. 5 (787 B.C.): "I will cut off the inhabitant from the plain of Aven (Bikath Aven);" the Hebrew word Bika is the same with the Arabic Bukâ'a. Aven is given in the Septuagint as On, the domestic name of the Egyptian Heliopolis. The allusion is clearly to the Bukâ'a of Ba'albek . . . . The voice of Syrian tradition, among all sects and in every district, is that Solomon built the cyclopean walls of Ba'albek, assisted by the genii who were under his control. Dr. Robinson, whose learned chapter on the history of Ba'albek leaves nothing to be desired, states that "the name Heliopolis, 'City of the Sun,' implies that this city, like its namesake in Egypt, was already consecrated to the worship of the sun. Indeed, the sun was one of the chief divinities in the Syrian and Asiatic worship, and to him was applied in their mythology, as well as to Jupiter and some other gods, the name of Baal, or 'Lord.' . . . The name was in old times attached to places innumerable, and Ba'albek was no doubt the centre of the Syrian Baal-worship. (Source: Picturesque Palestine, vol. 2, pp. 230-32.) 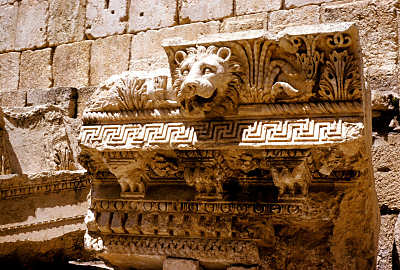 In the second and third centuries . . . Ba'albek was a Roman colony, and enjoyed the boon of the jus Italicum, only granted to favoured provincial cities . . . . [T]here is strong evidence in favour of Antoninus Pius (who died A.D. 161) having contributed to the Acropolis one of its stately temples . . . . "When the power of the state, under Constantine, began to be wielded in favour of Christianity, . . . the emperor founded here an immense basilica, and consecrated a bishop with his presbyters and deacons, although there were but few Christians in the city. . .  ." The heathen rites and customs of the people were too deeply rooted to be at once eradicated, and the accession of Julian the Apostate to the imperial throne (A.D. 361) was the signal for the violent suppression of Christianity. It was at this time that the people of Heliopolis distinguished themselves by deeds of violence and cruelty, in revenge, it is said, for the restraints formerly imposed upon them. Under Julian's immediate successors the tide again slowly turned in favour of Christianity. (Source: Picturesque Palestine, vol. 2, pp. 232-35.)