Palmyra - Temple of the Sun 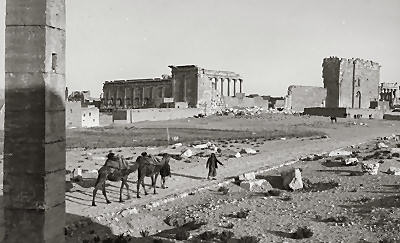 General View of the Temple of the Sun

Standing on a rising ground, near the south-eastern end of the town, its appearance when entire must have been most impressive. Its projecting base, or krepis, of massive rough-hewn stones is surmounted by a smooth-cut wall with a range of thirteen Corinthian pilasters, not less than thirty feet high, above which is a plain frieze and cornice. Between the pilasters are richly carved windows with pediments, of which no less than thirteen can still be counted on the north side. These are flanked by lofty pilasters sixty-eight feet in height, the three corner ones on each side being higher and larger than the rest, and projecting so as to form corner towers to the walls. Of the other three sides the foundations only are ancient, the superstructure being the work of the Arabs, who used the temple as a fortress. (Source: Picturesque Palestine, vol. 2, p. 192.)

Western Side of the Ruins of the Temple of the Sun

On the western side a magnificent triple gateway formed the entrance to this grand court, approached by a broad flight of steps. The portico of ten columns is gone, but the monolithic sides and lintel of the central door still remain, ornamented with rich sculptures of vine branches, clusters of grapes, and flowers. This door was thirty-two feet high and sixteen wide, but has been disfigured and almost concealed by a huge square Saracenic tower built by the Muslims, who also constructed a moat around the entire external wall. Entering the great court through what remains of the doorway, we see whole rows of columns which are still standing, a part of that splendid double colonnade of three hundred and ninety columns which ran around three sides of the interior of the court. Each pillar had a bracket for a statue, and some of them still retain their entablatures.  (Source: Picturesque Palestine, vol. 2, pp. 192-93.) 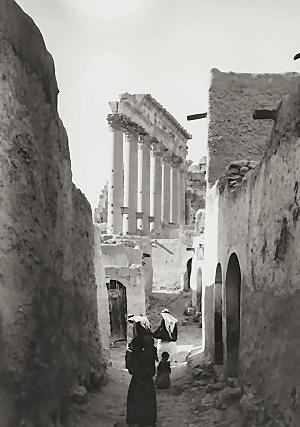 Street of the Village in the Temple Ruins

Crossing the wilderness of débris to the south-eastern angle of the court, and winding our way through the lanes of the modern Arab village, whose abject houses, grotesquely built of fragments of the old temple, with their more abject occupants, seem a mockery of the pristine splendour of the place, we come to the temple itself, the naos, or sanctuary. This building, a peripteros standing on a raised platform, is one hundred and thirty-four feet in length exclusive of the colonnade, and is believed to be unique in design. Around the shrine stood a single row of fluted Corinthian columns, sixty-four feet high, with bronze capitals, above which was an unbroken entablature, whose frieze was ornamented with boldly carved festoons of fruit and flowers, supported at intervals by winged figures. The capitals are now gone, as bronze was an article too valuable not to be coveted and too portable not to be carried away. The doorway is not, as usual, in the centre of the building, but between two columns in the west side, and opposite to the main door of the court; and in front of it, within the building, is the entrance to the cell. (Source: Picturesque Palestine, vol. 2, pp. 193-94.)

Village in the Ruins of the Temple

This exquisitely sculptured portal is thirty-three feet high by fifteen feet wide, and on the soffit is an eagle with outspread wings, similar to those at Ba’albek and Husn Suleiman. It is on a starred ground, flanked by genii. The wall is pierced with windows, between which are pilasters opposite the columns, and at each end are two Ionic semi-columns. The roof of the temple is entirely gone, as is that of the Ba’albek temples, and the roof of the mosque standing within it is supported by roughly built arches. At each extremity of the building is a semicircular vaulted chamber, with a richly sculptured monolithic roof . . . . From the summit of the wall one can obtain a fine view of the temple, the triple arch, and the distant castle, and the imagination may reconstruct the splendid temple with the immense court and elegant colonnade. It cannot boast of marble columns, of which we read in so many books of travel, for there is not a marble shaft or capital in Palmyra. The temples were all built of the white compact limestone from the adjacent hills. (Source: Picturesque Palestine, vol. 2, p. 194.)