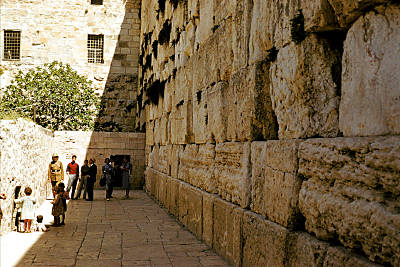 Most of Dr. Feinberg's trips were before Israel's capture of the West Bank and the Old City of Jerusalem in 1967. Thus his photographs depict a different world in many respects. Some of the most striking differences are the pre-1967 photographs of the Western Wall. This is another example of how a picture can sometimes communicate more than the most passionate and logical argument. Look at the picture above. What do you see? What do you not see? 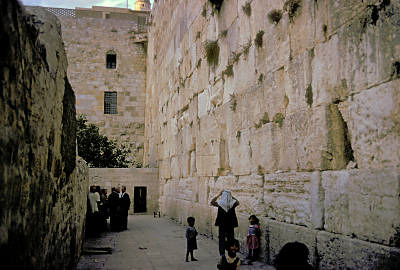 This was the reality for 19 years — Jordanian soldiers and tourists, but no Jews. Arabs promised Jews the right to visit their most holy place in the world, yet Israeli Jews were banned from the Western Wall without exception through this time. "Among the articles of the armistice agreement was one, Article VIII, under which Jordan guaranteed Israeli Jews free access to the Wailing Wall. In fact, during the nineteen years of Jordanian rule in East Jerusalem, no Israelis were allowed to visit this site which was most holy to them" ([Martin Gilbert, Jerusalem in the Twentieth Century (New York: John Wiley & Sons, 1996),] p. 241). 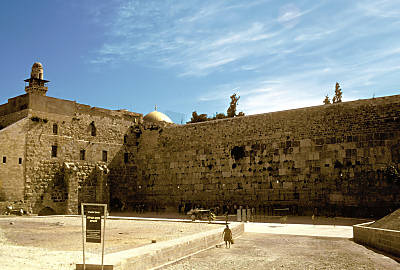 One of the most stirring moments for me as I went chronologically through Dr. Feinberg's slides was his 1968 visit to the Western Wall. Though I never met Dr. Feinberg, I felt as if I was right there with him on this occasion. Each year when he visited the Western Wall, he took many pictures. But in 1968, following Israel's possession of the Old City, the area was completely different. 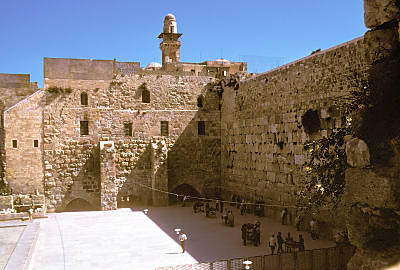 The ramshackle neighborhood adjacent to the Western Wall had been cleared to make room for a large prayer plaza. Jewish people were now praying at the wall. If such is possible, I felt that I was experiencing Dr. Feinberg's excitement as he took picture after picture — standing in one place and just slowly turning and clicking. He must have taken a roll of film as the thrill of the moment overwhelmed him.

See the Wailing Wall in the 1800s or visit it as it is today. Or see the Temple Mount or Old City Gates as they used to be.