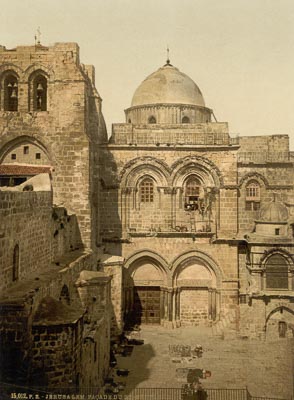 Entrance to the Church of the Holy Sepulcher

A narrow passage and flight of steps lead down to the courtyard in front of the entrance to the Church of the Holy Sepulchre . . . . The open court is the favourite resort of pedlars from Bethlehem, who expose their wares for sale on the pavement . . . . The façade of the church occupies the entire northern side of the court. There are two doorways, one open and one closed by the masonry of the Chapel of Calvary, and above each door is a window. The whole dates from the twelfth century, and forms part of the work of the Crusaders when they remodelled the church. Some of the ornamentation is very similar to that which may be seen in many churches in Normandy at the present day, and a bas-relief over one of the doors, representing with much spirit the entrance of Christ into Jerusalem, is supposed to have been executed in France. The string courses above the doors and windows are partly made up of blocks of stone belonging to a very beautiful cornice of classical design, almost identical with that of the cornice of the Golden Gate in the east wall above the Haram esh Sherif. (Source: Picturesque Palestine, vol. 1, pp. 14, 18.)

Chapel of Calvary, or Golgotha 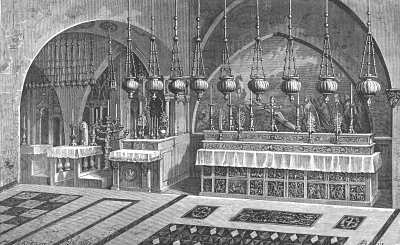 The traditional site [of Calvary] is within the Church of the Sepulchre. The approach to it is by a flight of steps from the south transept. Going up, we enter a vaulted chamber, now named the Chapel of the Elevation of the Cross. It is about fourteen feet higher than the floor of the church. At its eastern end is a platform ten feet long and eighteen inches high. In the centre stands the altar, richly decorated. Under the altar is a hole in the marble slab, communicating with a similar one in the natural rock below. In this hole, it is said, the cross of our Lord was fixed. Near it, on the right, is an opening in the marble revealing the rent in the rock occasioned by the earthquake, as recorded by St. Matthew (xxvii. 51). The holes for the crosses of the two malefactors are shown to the right and left, at the ends of the altar, about five feet distant from that in the centre. (Source: Jerusalem, Bethany, and Bethlehem, p. 165.) 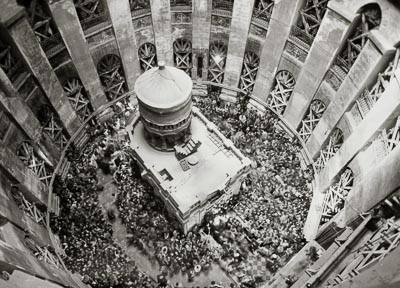 Interior of the Church of the Holy Sepulcher

Beyond it lies the Rotunda, which is sixty-seven feet in diameter. The Rotunda formerly had twelve large columns which supported the dome, but there are now eighteen piers which carry a clerestory and a dome open at the top . . . . In the centre is the Shrine of the Holy Sepulchre . . . built, in the very worst taste, of the ruddy coloured limestone known at Jerusalem as "Santa Croce" marble. The building is about twenty-six feet long and eighteen feet wide. Its western end is polygonal in shape, its eastern, square; and the interior is divided into two chapels, one on the east, known as the Chapel of the Angels, the other containing the Sepulchre of Christ . . . . The tomb chamber is entirely lined with marble, and from its roof hang forty-three lamps . . . These lamps are kept burning day and night. The tomb is a raised bench two feet high, six feet four inches long, and three feet wide, covered by a marble slab which has a groove cut transversely across the centre. Above the tomb are three bas-reliefs in white marble representing the resurrection. (Source: Picturesque Palestine, vol. 1, pp. 18-20.)

The Chapel of Helena, Church of the Holy Sepulcher 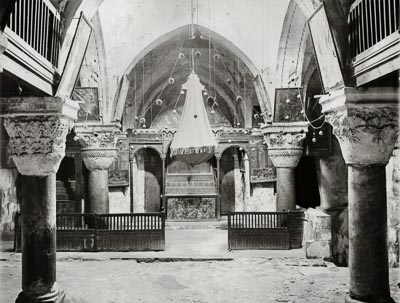 The Chapel of Helena . . . is divided into three aisles by four stunted columns with heavy-looking capitals, which carry a dome that rises above the level of the courtyard of the Abyssinian Monastery, and gives light to the chapel below. There are two apses containing altars dedicated respectively to St. Helena and the Penitent Thief. The position of the third apse is occupied by an opening through which a flight of steps leads down to the Chapel of the Invention of the Cross . . . . In the Chapel of St. Helena the place is pointed out where the Empress sat whilst the workmen were searching for the cross in the cave below . . . . According to tradition, the search instituted by the Empress Helena led to the discovery of the three crosses; but . . . it was at first impossible to distinguish the cross upon which our Saviour died. This difficulty was overcome by taking the three crosses to a noble lady of Jerusalem who was afflicted with an incurable illness; the crosses of the thieves had no effect, but on being touched with the true cross her disease left her, and she sprang from her couch whole and well. (Source: Picturesque Palestine, vol. 1, pp. 22-23.)