Source: Earthly Footsteps of the Man of Galilee, p. 132

But the chief interest of Nâblus is centred in a little group of irregularly built houses, clustered closely together in the south-west quarter, the most crowded part of the city. Here we find the last remnant of the once powerful Samaritan community. In 1874 they numbered one hundred and thirty-five individuals, of whom twenty-eight were married couples, ten were widows advanced in years, forty-nine were unmarried men and young boys, and twenty were young girls, many of whom were already promised in marriage. Since this date the numbers have decreased. Several marriages have, however, taken place. (Source: Picturesque Palestine, vol. 2, p. 13.) 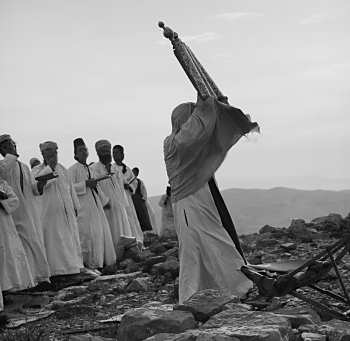 The Torah (Pentateuch) is the only portion of the Bible which the Samaritans hold sacred. It is their sole guide and rule of life. Their version differs in many points from the Hebrew version. The other historic portions of the Hebrew Scriptures they regard as spurious, and especially resent the account given therein of their origin. They describe themselves as "Children of Israel," but trace their origin chiefly to the two sons of Joseph. They date their separation from the Jews from the time of Eli the priest, whom they regard as a usurper, he not having been of the priestly family of Eleazar, but a descendant of Thamar, Aaron's fourth son. According to the Samaritan Chronicle their high priests were true descendants of the sacredly appointed branch of the family until A.D. 1624, when the last male representative of the line died. Then, as it is recorded, "the consecration of Levites commenced;" sacrifices ceased to be offered up, and the ministrations were limited to such services as may legally be performed by them. (Source: Picturesque Palestine, vol. 2, p. 16.)

Ancient Copy of the Samaritan Pentateuch

Within the veil [of the Samaritan synagogue] are preserved with jealous care, among other literary treasures, three very ancient copies of the Samaritan Pentateuch, one of which is said to have been written by Abishua, the great-grandson of Aaron. This celebrated Roll of the Law, which is probably of the third century of our era, is preserved in a cylindrical silver-gilt case, opening as a triptych does on two sets of hinges . . . . The roll itself is composed of prepared goat-skins twenty-five inches high and about fifteen feet wide; they are neatly joined together, but in many places have been torn and rather clumsily repaired with parchment of various qualities.  . . . A crimson satin cover, on which Samaritan inscriptions are embroidered in gold thread, envelopes the treasure. (Source: Picturesque Palestine, vol. 2, p. 16.)

A Woman of Samaria

Source: Earthly Footsteps of the Man of Galilee, p. 164

As our artist was taking pictures in Shechem a woman and a little boy appeared upon the scene, and showed much anxiety to know exactly what we were about. We were standing upon the hill overlooking Shechem, with the slopes of Gerizim rising to the east. The artist, having taken a picture of the city, quietly turned his camera upon the tripod, and took a photograph of this woman before she knew what he was doing. We concluded that it was a member of the sect of the Samaritans from the fact that she had no veil over her face. (Source: Earthly Footsteps of the Man of Galilee, p. 164.)