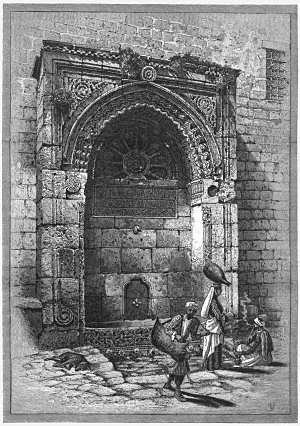 The works connected with the water supply of Jerusalem are of very great interest . . . . The present supply is deficient in quantity and as a rule bad in quality; to this may be attributed the fact that the city which the Psalmist once described in loving terms as "the joy of the whole earth," has become one of the most unhealthy cities of the world . . . . the average annual rainfall is really not more than about nineteen inches, and the rainy season is spread over the winter months from November to March. During the remaining months even a slight shower is of the rarest occurrence . . . . The number of cisterns and reservoirs which were excavated or built for the collection of the rainfall, and the skill exhibited in the construction of the conduits that brought water into the city, show pretty clearly that there has been no material change in the climate since the days of the Jewish monarchy. The modern supply of water is derived from springs, wells, cisterns, pools, or reservoirs, and springs connected with the city by aqueducts. (Source: Picturesque Palestine, vol. 1, pp. 101-2.) 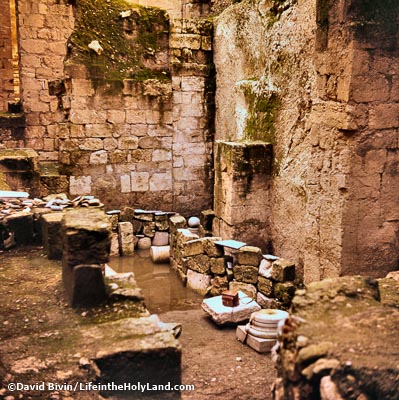 The eastern portion of the north side of the Haram esh Sherif is protected by the Birket Israil, known traditionally as the Pool of Bethesda. The reservoir is situated in a valley which takes its rise to the north of the city wall, and runs out into the Kedron valley about one hundred and forty-three feet south of the north-east angle of the Haram enclosure. The valley is now little more than a shallow depression, but excavations have shown that in the lower portions of its course it assumes the character of a deep ravine . .  . . The Birket Israil is three hundred and sixty feet long, one hundred and twenty-six feet wide, and eighty feet deep, but its great size can hardly be appreciated on account of the rubbish, which rises to a height of thirty-five feet above the floor. At the west end are two parallel passages running westwards along the Haram wall, whence a flight of irregular steps leads down to the pool; the east end is closed by a dam forty-five feet thick, which is also part of the city walls. No trace has yet been found of the system of conduits by which it was supplied with water. (Source: Picturesque Palestine, vol. 1, pp. 45-46.) 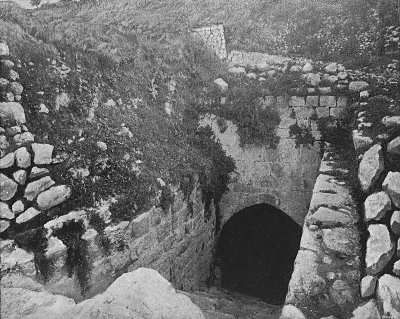 Source: Earthly Footsteps of the Man of Galilee, p. 197.

The fountain is in the valley of the Kidron, just below the village of Siloam. It rises from the bottom of a deep cave at the base of Ophel. The masonry in the sides of the cave is ancient. A long flight of steps leads down to the water, which issues from under the lowest step, flows across the bottom of the cave, and disappears, with a weird, murmuring sound, into a narrow, dark, rock-hewn tunnel. What has given this fountain, both in ancient and modern times, its greatest celebrity is the intermittent flow of the water . . . . A woman, who was accustomed to wash at the fountain daily, informed them that the flowing occurs at irregular intervals-sometimes two or three times a day, and sometimes only once in two or three days. The common legend is, that a dragon lies within the fountain: when awake he stops the water, when he sleeps it flows. Instead of a dragon the Jews believed an angel was the cause. (Source: Jerusalem, Bethany, and Bethlehem, p. 93.)

The Birket Mamilla, Commonly Called the Upper Pool of Gihon 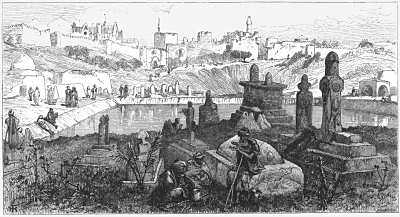 The Birket Mamilla collects the surface drainage of the upper part of the Valley of Hinnom, and transmits its water to the Pool of Hezekiah by a conduit which passes under the city wall a little to the north of the Jaffa Gate, and has a branch running down to the cisterns in the Citadel . . . . The average depth of the pool is nineteen feet; it is three hundred and fifteen feet long, and two hundred and eight feet wide; the estimated capacity is eight million gallons, but there is a large accumulation of rubbish at the bottom, and it now holds water imperfectly. The pool has not been well placed for collecting the drainage, as that from the western slope is lost, but the position was necessary to obtain a level high enough to supply the Pool of Hezekiah and the Citadel. A hole in the ground below the lower end of the pool gives access to a flight of steps leading down to a small chamber, where the conduit, which on leaving the pool is twenty-one inches square, narrows to nine inches, so as to allow of an arrangement for regulating the flow of water into the city. (Source: Picturesque Palestine, vol. 1, p. 108.)

See Hezekiah's Pool, the Pool of Siloam, the Pools of Solomon, Water Supplies, or Water in Egypt

At BiblePlaces, see Warren's Shaft, The Pool of Siloam, or Hezekiah's Tunnel