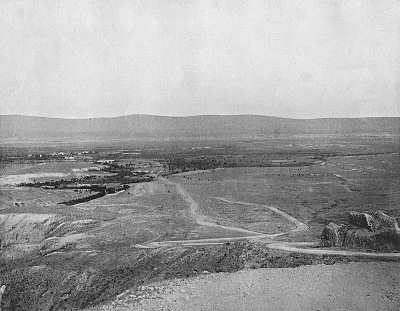 Source: Earthly Footsteps of the Man of Galilee, p. 231.

Jericho, "the City of Palm-trees," was the contemporary of the doomed Cities of the Plain, and whatever doubt may hang over their exact position, there is none whatever on the Jericho of the prophets. In speaking of Jericho we must bear in mind that the name is claimed by three distinct cities of different ages, succeeding one another. First, there is the old Canaanitish city, destroyed by Joshua and rebuilt by Hiel, the resort of Elijah and Elisha; secondly, the Jericho of the Herods and of the New Testament; and thirdly, Er Riha, the crusading and modern representative, the name, strangely different as it sounds is its English rendering, being the Arabic equivalent of the old Hebrew Jericho. . . . [W]here are the trees from which Jericho of old obtained its name, its fame, and its wealth-the palm? Not one remains . . . .[T]he last palm has gone, and its graceful feathery crown waves no more over the plain, which once gave to Jericho its name of the City of Palm-trees. (Source: Picturesque Palestine, vol. 1, pp. 170, 171.)

From the great "tell," or mound of ruins, the ground steadily rises till we reach the foot of Jebel Quarantania . . . .Old Jericho stood midway between the pass up to Jerusalem on the south and the passes of Benjamin towards Bethel on the north. There are three great springs which water it, and as we look towards the hills we can see how easily Joshua's spies could avoid observation as they stole up through the ravine choked with jungle and cane-brake to Ain-dûk, and thence to the mountain, amidst the caves and ravines of which they might be searched for in vain. In the oasis of Jericho, whose beauty was such that Wisdom compares herself with its rose-plants (Ecclus. xxiv. 14), Strabo tells us that for the space of a hundred stadia by twenty, opobalsamum, henna, myrrh, and all sorts of spices were grown. (Source: Picturesque Palestine, vol. 1, p. 171.) 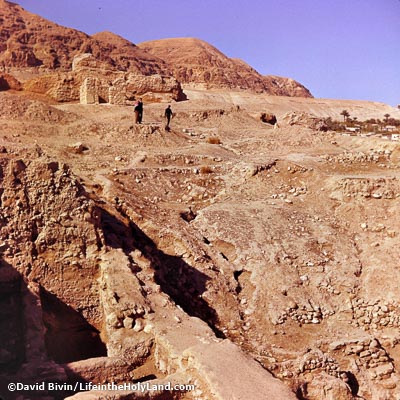 Slight as are the vestiges of the Canaanitish cities, those of the great city of Herod are scarcely more distinct. An incurious traveller might wander over the whole site, and be scarcely conscious of any traces of antiquity.  . . . After the destruction of the place by Pompey, Antony had it rebuilt, with the assistance of Herod, and gave it to Cleopatra, from whom Herod governed it for a time, and afterwards secured all its revenues for himself. Here he built palaces, forts, and amphitheatres, and often himself resided, and here, after vainly seeking a cure in the springs of Callirrhoe, he came to die . . . . Soon afterwards destroyed in a rebellion, Archelaus restored it in yet greater magnificence, and such it was when our Lord visited it. Vespasian again destroyed it; Hadrian rebuilt it, and garrisoned it with the tenth legion. It was the seat of a bishopric under the Byzantine empire and full of churches and convents, but appears to have been swept with the besom of destruction by Shahr Barz, the general of the ruthless Chosroes, A.D. 614. From that period to the time of the Crusades churches and monasteries arose again. The caliphs knew the value of the district and encouraged agriculture, but the city had gone for ever. (Source: Picturesque Palestine, vol. 1, p. 174.)

A more wretched and degenerate-looking lot of natives we saw nowhere than at Jericho. In the village of which we give a picture the houses are built to the height of seven or eight feet of stone and then covered with thorny acacia trees . . . . They have no doors. During the day these natives roam over the desert upon their horses or mind their flocks of sheep and goats upon the plain. Near the village we see above is the Jordan Hotel, kept by a foreigner and supplied with the comforts of a modern hotel from Jerusalem. It is customary for large bands of these natives to gather about the front of the hotel in the evening, where they sing and dance with the hope of securing baksheesh from the tourists. These natives are about the only class of people who are able to live in this region during the summer. The hotels in Jericho are closed from the last of April to October. A foreigner enters this region in the summertime at the risk of his life. It is said that the air here in the month of July is like the breath of a furnace. (Source: Earthly Footsteps of the Man of Galilee, p. 154.)