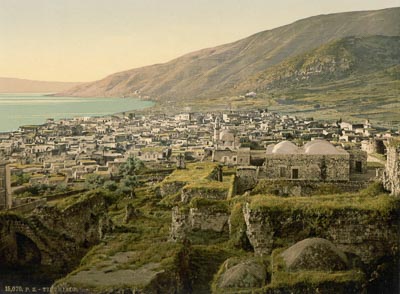 Tiberias was one of the most important towns of Galilee. It was once an attractive and beautiful city, but to-day it is in ruins, like almost everything else in the country upon which the eye may rest . . . . He who visits Tiberias now will find the shore lined with ruins of what were once stately structures, filth and wretchedness among its degraded inhabitants; and his view of the lake and its surrounding hills must be obtained, not from the roof of some splendid palace, but from the broken city walls and the crumbling castle . . . . The present town . . . which travellers visit is comparatively modern, while the ancient city of Herod Antipas stretched to the south of it along the shore for more than a mile. The space between the water's edge and the steep hill to the west is completely covered with ruins, and among these are to be found whatever remains still exist of the times of Christ. (Source: Picturesque Palestine, vol. 2, p. 50.) 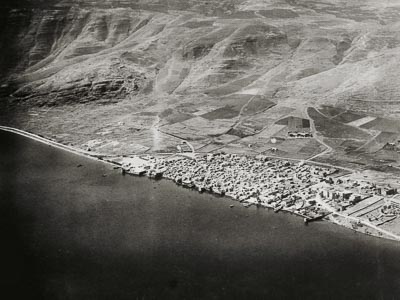 [Tiberias] is one of the most sacred cities of the Jews in Palestine, and now has a population of about six thousand souls. Four thousand of them are Jews, three hundred are Christians and the rest Moslems. . . . Marion Harland says: "Tiberias has never been comely; the alleys, that do duty as streets, are lined in some quarters with booths and stalls, in others with mean dwellings that are dirty white in the sunshine and dirtier gray when wet . . . . The horses splash through filth made liquid by the rain, and course in vile-smelling rivulets down the middle of the street." There is, perhaps, no town in Syria so filthy as Tiberias or so little to be desired as a residence. It is several hundred feet below the level of the Mediterranean. To the west are lofty mountains which shut out the western breezes from the great sea. It is therefore intensely hot in summer. A traveler says: "The last time I encamped there near the baths the thermometer stood at one hundred degrees about midnight." (Source: Earthly Footsteps of the Man of Galilee, pp. 157, 189.) 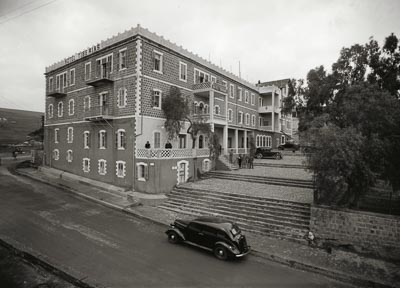 The Tiberias Hotel is not an attractive place externally, and the universal testimony of travelers is less favorable concerning its interior. The tent of the tourist is better than these village hotels in Palestine. In walking through the town of Tiberias the traveler will be struck by the predominance of the Jewish element. Many of the Jews are from Poland, most of them living on alms sent from Europe . . . . N.B. Tristram, in his "Travels in Palestine," says: "The houses of Tiberias are placed without order or arrangement, as though they had been pitched down from a sand cloud, but for the most part looked clean within." Upon visiting the Jewish quarter on Friday evening, when the Sabbath had begun, and the synagogue services were going on, he adds: "The houses, with their open doors, looked clean and bright inside for the Sabbath; the people were well dressed in their best--the women somewhat like the Jewesses of Algiers. The men wore shabby broad-brimmed hats, and long silk dressing gowns, with a girdle." (Source: Earthly Footsteps of the Man of Galilee, pp. 189, 218.) 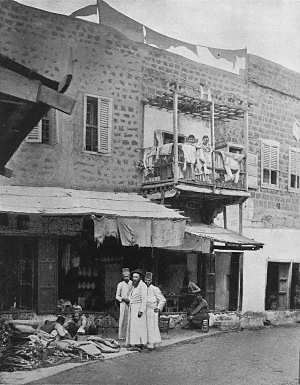 Source: Earthly Footsteps of the Man of Galilee, p. 189.

The streets are lined in some quarters with booths and bazaars, the merchants making a fine display of their bright colored fabrics and oriental wares. Fruit venders under their canvas canopies, fish and vegetable dealers in their respective markets; Jews, Moslems, Syrians and Europeans move in and out among the booths, and business is carried on in a fashion that would amuse and interest any European or American. The women, "with rich frocks and gold lace fronts, but with elegant long sleeves, and a white kefiyeh over the head, were generally handsome, and some of the girls were beautiful and fair." Upon overhanging balconies were groups of happy children in quaint oriental costumes, while mingling with the crowd were the more humble peasants, returning from the field . . . . The moving panorama, in all its detail, combines to make the business street a center of interest to the visitor. (Source: Earthly Footsteps of the Man of Galilee, p. 218.)