Also called the "Temple of the Sun" 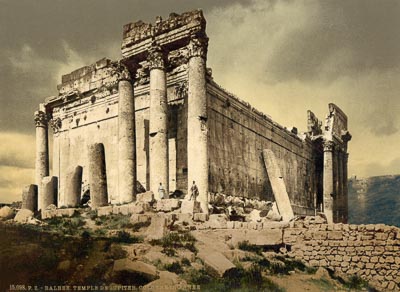 The Temple of the Sun, Ba'albek

A heavy shower drove us under the northern peristyle of the Temple of the Sun . . . . Behind us rose the smooth-cut wall of the cella, one hundred and sixty feet long, and around us were fragments of the six columns of the original fifteen which formed the northern peristyle, together with entablatures, capitals, and the exquisitely carved blocks of the sculptured ceiling . . . . This temple, known to the Arabs as Dar es Sa'adeh, or "Court of Happiness," and generally known as the Temple of the Sun, was two hundred and twenty-five feet in length, including the colonnades, and its breadth about one hundred and twenty . . . . The cella, or temple proper, was one hundred and sixty feet long by eighty-five feet broad, surrounded by the magnificent peristyle of fifteen columns on each side and eight at each end, counting the corner columns both ways. At the eastern end was an inside row of six fluted Corinthian columns, and an additional column on each side opposite the north and south walls of the cella, which are extended to form the vestibule. (Source: Picturesque Palestine, vol. 2, pp. 219-20.)

The exterior of the façade of the temple is in all stages of decay. The rude hand of barbarians, searching for the iron dowels or metal cores between the joints of the columns, has dug away the base of most of the standing columns to the very centre. Four columns are standing on the south-east side, three on the west, and nine on the north side . . . . Each column is composed of three pieces, jointed so perfectly that a sheet of paper could not be inserted between the edges. Such perfect jointing, and the perfect preservation of the edges, would indicate that the three blocks must have been placed in position when rough, and then rounded and polished while standing. The sculpture of the capitals and entablatures was probably also executed after the blocks were in place . . . . One of the columns on the south side fell about one hundred years ago against the wall of the cella, where it still stands in a leaning position, and although it broke in one of the stones in the cella wall, it is so well put together that it remains unbroken to this day. (Source: Picturesque Palestine, vol. 2, p. 221.)

Entrance to the Temple of the Sun

Every ornament that could be introduced into Corinthian architecture is lavished on this portal, and yet it is perfectly light and graceful. It is twenty-one feet in width and forty-two feet high. It is composed of nine great stones, six forming the jambs and three the lintel. Each of these stones is of enormous dimensions. When I visited Ba'albek, in 1856, the central block or keystone of the lintel, weighing some sixty tons, had slipped down about two feet. When Pococke and Wood sketched the ruins [in 1751] this portal was in a perfect state, but in the earthquake of 1759 A.D. it sunk down between the two others . . . . The ornamentation around the portal is the most elaborate known in all the range of Corinthian architecture. Not only the architrave, but the frieze and the cornice are profusely decorated. There are ears of corn, grapes, and vine-leaves, while genii lurk among the leaves in the lower compartments formed by the intertwining vine, though all are sadly marred by barbarian hands. (Source: Picturesque Palestine, vol. 2, p. 220.) 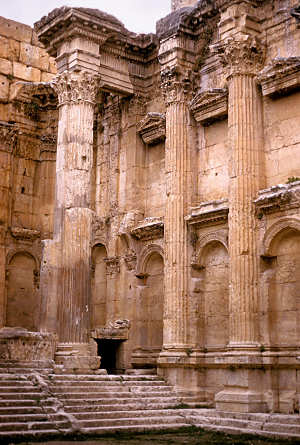 The interior of the cella is divided into two parts, the nave measuring ninety-eight feet by sixty-seven, and the sanctum, or adytum, occupying thirty-six feet of the west end. It has no windows or apertures for light.  . . . The nave of the cella has six fluted attached columns on each side, between which are two rows of niches, the lower row with a circular scalloped top and a bracket beneath, and the upper with triangular pediments, or tabernacles, forming canopies for the statues.  . . . The sanctum, or holy place for the altar, was about five feet above the main floor of the cella, and thirteen steps led up to it. At each end of the steps a door led down to the vaults, from which the priests uttered their mysterious oracular responses. The screen between the nave and the adytum was supported by fluted columns on each side, and on the walls are undulating figures in high relief, representing a sacrificial procession.  . . . A more exquisitely beautiful view than that from the east of the portal looking in upon this lavish treasure-house of sculpture cannot be found in the East or the West. (Source: Picturesque Palestine, vol. 2, pp. 220-21.)