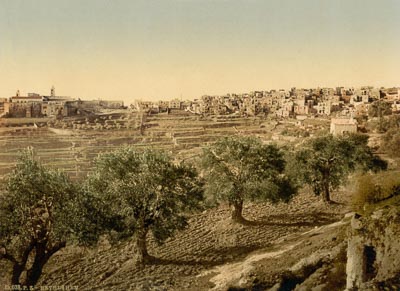 A steep ascent leads up to Beit-Lahm, “the house of flesh,” a phonetic accommodation of the ancient name Bethlehem, “the house of bread.” The hillsides are irregularly scarped with terraces sweeping round the eastern shoulder, on which are many gnarled and silver-grey olive-trees, while many a fig-tree occupies any spare corner, and vines are trained over the irregular walls of the terraces. . . . All bespeaks a care and cultivation uncommon in Palestine, for the inhabitants of the little town above are Christians, and till the soil with perseverance and patience unknown to their Moslem neighbours. . . . The town itself, no longer walled, is still confined within its ancient limits. There are no suburbs, and in fact, planted on the crest of a narrow spur that projects eastward from the central ridge and then abruptly breaks off, it has no room to expand. The white chalky ridge crowned with the long narrow street, with various alleys on either side of it, presents us with one of the few remaining specimens of an old Jewish city, for, excepting in the disappearance of the wall, it is probably unchanged in architecture and arrangement from what it was in the days of David. (Source: Picturesque Palestine, vol. 1, p. 123.)

The modern name Beit-Lahm, “House of Flesh,” is somewhat different in sound and meaning from the ancient Hebrew Beth-Lehem, “House of Bread;” but it is doubtless a popular corruption, such as one frequently meets with in Palestine. In olden times the town was called Beth-lehem Judah, to distinguish it from another Beth-lehem in Zebulun. It was also called Ephratah, “the Fruitful;” probably for the same reason that the name “House of Bread” had been given to it. . . . On the eastern brow of the ridge, separated from the crowded village by an open esplanade, is the convent, like a large, feudal castle. It is a huge pile, consisting of the Church of the Nativity and the three convents—Latin, Greek, and Armenian—abutting on its north, east, and south sides. The site is most commanding, the view from it embracing a large section of the wilderness of Judea, the Jordan valley and Dead Sea, and the purple-tinted mountain-chain of Moab and Gilead stretching like a great wall along the horizon, north and south, far as the eye can see. (Source: Jerusalem, Bethany, and Bethlehem, pp. 113, 116-119.)

Soon Bethlehem, comes into view—a white-walled village of about three thousand inhabitants, all professedly Christians. They are, however, a turbulent, quarrelsome set, ever fighting amongst themselves or with their neighbours. In the disturbances which take place so frequently at Jerusalem, it is said that the ringleaders are commonly found to be Bethlehemites. The women are remarkable for personal beauty. I saw more handsome faces here in a few hours than elsewhere in the East in many days. . . . The men are strong, lithe, well-built fellows, and I saw several young shepherds, who were models of manly vigour. Here, as elsewhere in the East, the pastoral pipe is in constant use. . . . Bethlehem stands on the crest of a ridge of Jurassic limestone. As it is surrounded by higher hills, however, the view from it is not very extensive. Jerusalem, though only six miles distant, is hidden by an intervening height; but through the valleys stretching away eastward to the Dead Sea, fine views are gained of the mountains of Moab, and from the flat roof of the Latin Convent part of the Dead Sea itself is visible. (Source: Those Holy Fields, pp. 42-43.)

“The place where the first ‘Gloria in excelsis’ was sung is probably farther east, where the bare hills of the wilderness begin, and a large tract is claimed by the Bethlehemites as a common pasturage. Here the sheep would be too far off to be led into the town at night; and exposed to the attacks of the wild beasts from the eastern ravines, where the wolf and the jackal still prowl, and where of old the yet more formidable lion and bear had their covert, they needed the shepherds’ watchful care during the winter and spring months, when alone pasturage is to be found on these bleak uplands.” (Source: Picturesque Palestine, vol. 1, p. 124.)