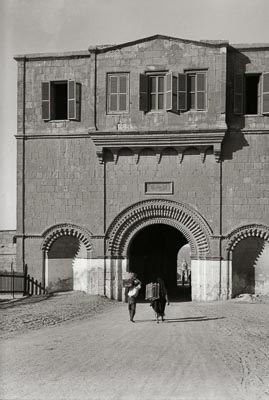 Entrance to the Citadel

The Citadel of Cairo was built by Saladin in A. D. 1166. It was built of stone brought from the small pyramids of Gizeh. It formed a part of Saladin's general plan for protecting the town from assault . . . . The great ruler chose the spot because of the pure air, since it was found, as a historian reports, that meat could be kept fresh at that high altitude twice as long as anywhere else in Cairo. The citadel itself is a small town with a palace built by Mohammed Ali, the mosque of Mohammed Ali, an older mosque built in the year 718 of the Hegira, and which was long the royal mosque of Cairo . . . ." A succession of luxurious and extravagant Sultans greatly extended and magnificently embellished Cairo . . ." but afterwards came anarchy and carnage. Nearly every Mameluke Sultan who resided within the citadel died a violent death. During the French occupation of Egypt the citadel was strengthened by outworks, and Mohammed 'Ali, the founder of the present dynasty, still further strengthened its defences. It was here that the Mamelukes were destroyed. (Source: Earthly Footsteps of the Man of Galilee, pp. 43, 70.)

Barracks at the Citadel

Source: Earthly Footsteps of the Man of Galilee, p. 70

The fortress itself was built by Saladin rather as a place of residence than of defence. Though elevated on a spur of Mount Mukattam, it is commanded by higher positions behind; and while in the days before cannon was invented it was doubtless a very strong position, its uselessness as a place of defence against modern attacks was demonstrated in 1805, when Mohammad 'Aly, by means of a battery on a higher position, expelled the Turkish governor, Khurshîd, from the Citadel. The fortress was constructed of massive stones brought from the third and smaller pyramids of Gîzeh . . . . All Cairene building subsists on the principle of robbery. The Ptolemies stole the pillars of the Pharaohs; the Arabs used the materials of the Greeks and Romans; the Turks steal from most of their predecessors with their usual indiscriminating brigandage. The Citadel is an extraordinary medley of all styles and periods. Hieroglyphic blocks jostle Turkish lath-and-plaster; the eagle of Saladin looks down upon the flimsy ornaments of Isma'il. (Source: Picturesque Palestine, vol. 4, p. 156-158.) 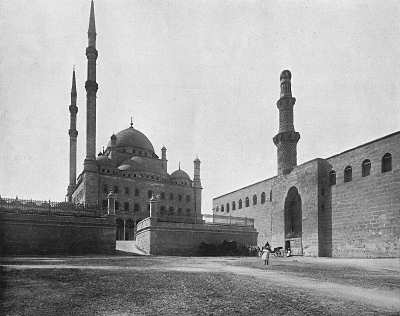 Source: Earthly Footsteps of the Man of Galilee, p. 67

Mosque of the Citadel

The mosque was begun by Mohammed 'Ali, but was not finished until 1857. It is built after the model of the church of the Hagia Sophia, at Constantinople. The mosque is square, covered by one large dome and four small ones. There is a clock in the tower on the western side presented by Louis Philippe. It is called the alabaster mosque because of the slabs and blocks of alabaster used for the incrustation of the masonry. The entrance is on the north side. Having permitted straw slippers to be placed over our shoes by a boy who stands at the entrance, we pass inside. To the southeast corner is the tomb of Mohammed 'Ali, who died in 1849. This is enclosed by a railing. Near this, and opposite to it, is a space also enclosed by a railing set apart for the Sultan. There is not a more interesting place in Egypt than the height, with its medley of buildings, barracks, palaces, walls and corridors for which the citadel stands. About this spur of the Mokattam hills the history of Egypt has turned from the days of Saladin to the present. (Source: Earthly Footsteps of the Man of Galilee, p. 67.)