Source: Earthly Footsteps of the Man of Galilee, p. 16

Plowing in Plains of Jezreel

In the picture we look westward, facing Carmel and the Mediterranean. We were here on the 4th of May, in 1894. Our dragoman asked the people, whom in the picture we see plowing, if they would stop long enough for us to take a photograph. For the usual "Baksheesh " they granted his request.  (Source: Earthly Footsteps of the Man of Galilee, p. 16.) 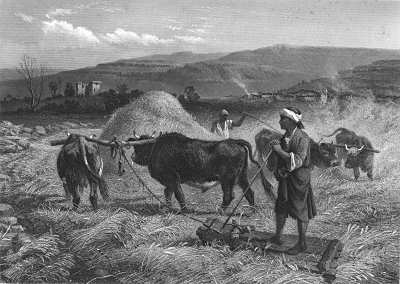 The mowraj is a threshing machine which is drawn over a floor by a yoke of oxen till the grain is separated from the straw, and the straw itself ground into chaff. The Egyptian mowraj has rollers which roll over the grain. Circular saws are sometimes attached to the rollers.  (Source: Earthly Footsteps of the Man of Galilee, p. 40.) 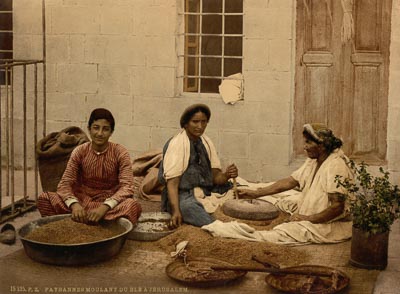 As we pass through the streets at the evening hour we hear the low monotonous hum of the hand-mill—the “quern” of the Scottish Highlands. There is a hole in the centre of the upper millstone through which the grain is passed, a handful at a time, by one of the two women who sit facing each other. “Two women shall be grinding at the mill.” Nearer the edge is another hole, in which an upright handle is fixed; both the women hold this together, and work it as two men would a crosscut saw. The flour falls out on to a cloth on which the nether millstone is placed. The stones are usually made of lava brought from the Hauran, harder and lighter than the sandstone of the country, which indeed is not very common, the whole formation of Central and Southern Palestine being soft, chalky, Eocene limestone. (Source: Picturesque Palestine, vol. 1, pp. 135-36.)