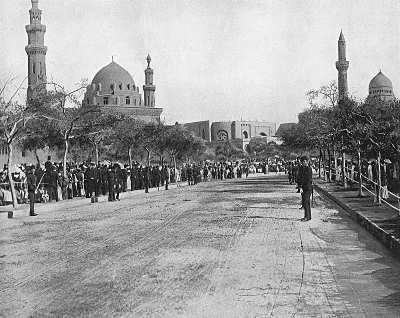 Source: Earthly Footsteps of the Man of Galilee, p. 72

Waiting Procession in the Festival of the Mah'mal

Most tourists leave Cairo before the middle of April, and hence fail to witness the festival of the Mah'mal, annually observed by the Cairenes about this time. The manager of Shepherd's Hotel informed us, the night before, that what is popularly called the procession of the Holy Carpet would take place on Saturday, the next day . . . . The crowd gathers at the Rumeleh, an open square at the foot of the citadel . . . . Not only were ropes stretched along the street to keep the people back, but soldiers with gleaming bayonets in their hands, were stationed in regular order to see that they observed the line indicated by the ropes. The crowd as we see it above is waiting for the procession. The people are in a gay mood, and water-bearers and sellers of red sherhert pass among them, advertising their willingness to provide refreshment for them by a kind of jingling music they provoke from a couple of brazen instruments held between their fingers. The festive and cheery voices heard on all sides indicate that the day is given up to universal good humor. (Source: Earthly Footsteps of the Man of Galilee, p. 72.)

Start of the Procession of the Festival of the Mah'mal 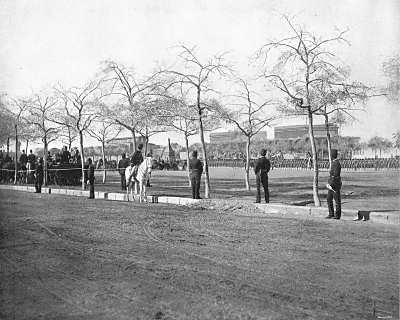 Source: Earthly Footsteps of the Man of Galilee, p. 73

The Cairenes owe this festival to a beautiful woman who lived at the beginning of the rule of the Mamelukes. Her name was Schagaret-eddurr (the pearl tree). After the death of her husband she ruled eighty days as Sultana . . . . This festival is in honor of her having made a pilgrimage to Mecca in a magnificent litter, borne between camels. In after years the rulers of Egypt sent a litter to Mecca along with the caravan of pilgrims who annually made the journey to the holy Mohammedan city . . . . The Mah'mal, or litter, is a wooden erection in pyramidal form and is hung by embroidered fabrics, which are very beautiful. These hangings, or coverings, accompany the litter and are intended for the most sacred sanctuary of the interior of the Mosque at Mecca . . . . The ceremony we witnessed was the one observed in honor of taking the coverings from the citadel to the Mosque of Huseyn. Here the sacred fabrics remain for two or three weeks, where they are embroidered and packed ready to accompany the great caravan of pilgrims to Mecca. (Source: Earthly Footsteps of the Man of Galilee, p. 73.) 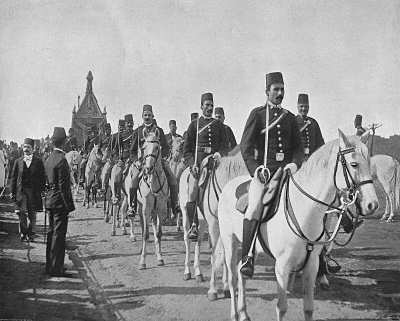 Source: Earthly Footsteps of the Man of Galilee, p. 74

Head of the Procession in the Festival of the Mah'mal

The coverings for the sanctuary at Mecca are sent every year from Cairo by the representative of the Sultan of Turkey. The Mah'mal having made the pilgrimage to Mecca often is not only a symbol of, royalty, but is also regarded as a sacred relic. Even the sight of it in the esteem of devout Muslims brings a blessing. At the head of the procession we see soldiers who are followed by camels, highly decorated, and bearing on their humps palm-branches, with oranges attached. Each section of the procession is preceded by a band of music, the largest being that which accompanies the Mah'mal. The cavalcade moves very slowly. The people cheer the "Prince of the Pilgrimage" as he goes by between two camels, one in front of the other. He is to conduct the expedition when it finally starts from the Birket-el-Hagg to Mecca . . . . An unusual commotion is created as the Mah'mal or litter goes by. It is seen far down the street on the back of a camel, swinging right and left, and up and down, as the ship of the desert makes its way through the sea of excited and tumultuous humanity on every side. (Source: Earthly Footsteps of the Man of Galilee, p. 74.)