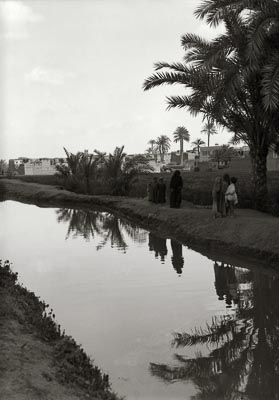 When Menes came northwards from his old capital of This, and set about founding a new city near the head of the Delta, his first undertaking was boldly to turn the course of the river. By dykes and dams he diverted the Nile from its channel beside the Libyan mountains, so as to form a barrier between the new city and the tribes of the East, and on the former bed he built Memphis. We are told that there were palaces and temples and schools and beautiful squares and streets in this new city of six thousand years ago; there was a famous citadel called the "White Wall," a fine port upon the Nile, and in later days a special quarter for the Phoenician traders who brought their merchandise to Egypt. So large was the city that even in the time of its decline it was half a day's journey to cross it from north to south. For five thousand years Memphis was the first or the second city of Egypt. It was only second to Sais when Herodotus journeyed there, and even when Alexandria was founded Memphis still stood next in rank. (Source: Picturesque Palestine, vol. 4, pp. 169-170.) 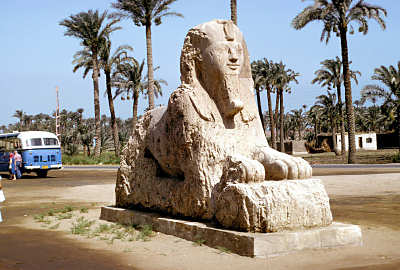 The Arab invasion and the building of Fustât at last destroyed it, for the inhabitants migrated to the new capital hard by. But long after this it was still a wonder to travellers, and that delightful writer, the learned physician 'Abd-el-Latîf of Baghdad, describes Memphis as it was in the beginning of the thirteenth century with his quaint and graphic pencil. "Its ruins," he says, "still present a crowd of wonders that bewilder the intellect, and which the most eloquent of men would vainly attempt to describe. The more one considers the city, the greater grows the admiration which it inspires, and each new glance at its ruins is a fresh cause of delight . . . . [W]hen you believe you have thoroughly grasped it, Memphis at once convinces you that what you have conceived is still far behind the truth." The wonderful monolithic green chamber of brecchia verde, once the shrine of a golden statue with jewelled eyes, was still to be seen there, and the sphinxes of the temple of Ptah, the Egyptian Vulcan, originator and fashioner of all things, and the walls and gates thereof, were still standing . . . (Source: Picturesque Palestine, vol. 4, p. 170.) 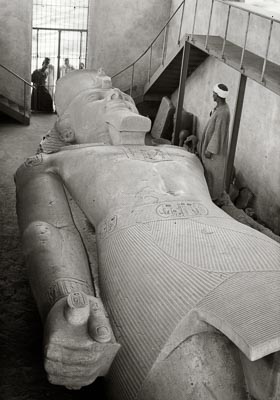 But even there the insane greed of treasure-hunters had begun to work its disastrous effects. From the temples and tombs of Memphis to the ruins of Merv, the Oriental mind has associated the remains of antiquities with the presence of concealed treasure. 'Abd-el-Latîf records with indignation the irreparable destruction wrought by "people without sense" in this childish pursuit, and tells how they mutilated the statues (whom they took for guardians of the tombs), bored holes, wrenched off metal-work, and split up monoliths, in the hope of discovering hidden wealth . . . . And when treasure was no longer expected, a worse thing came upon the monuments of Egypt: they were used as building materials for the walls and mosques and citadel of Cairo . . . . Of all that splendour and beauty nothing remains; as we wander among the palms that fatten on the site of Memphis, a few fragments of what may have been the temple, and the great half-buried, half-drowned colossus of Rameses II. prone upon its face . . . are all that remain to remind us of the oldest city of the world. "The images have ceased out of Noph" (Ezek. xxx. 13). (Source: Picturesque Palestine, vol. 4, p. 170.) 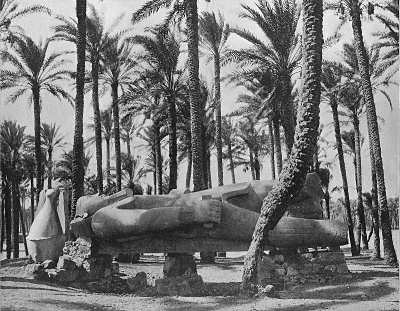 Source: Earthly Footsteps of the Man of Galilee, p. 56

There are two statues of Rameses II between the Nile and the Necropolis of Memphis . . . . Our view is of the smaller of the statues. This one is broken at the feet and part of the cap is wanting. Rameses II was frequently called the Pharaoh of the Oppression. This is probably not correct . . . . He now lies in limestone, prostrate amid the ruins of the city he helped to enrich and adorn. The first in her glory, he is the last in her desolation. Blanched with the sun of thirty centuries he now lies looking into the deep eastern heavens. His companions were once the proud courtiers of a prodigal court, his companions now are the jackals, whose weird howl lends a melancholy interest to the solemn moan of the palms, the only sentinels left to guard the proud Egyptian king. The very name of Rameses once struck terror to the hearts of men; he is so quiet and harmless now, in the stone expression he has left of himself, that the lizards may play hide and seek on the surface of his vast face. The tall rank weeds grow about his mighty form and may lean their dying heads upon his cold and bloodless bosom. (Source: Earthly Footsteps of the Man of Galilee, p. 56.)