Tomb of Tut in the Valley of the Kings

The tombs in this one valley number twenty-five (and there are hundreds in other parts of the mountains), and from Amenoph III. to the end of the Twentieth Dynasty not a single royal tomb but that of Horus is missing. The valley is a singularly impressive site for a burying-ground. Steep cliffs shut it in on every side, not a blade of grass or living thing can be seen, nothing but burning rock on the right hand and on the left. Here and there a steep slope leads down to a gloomy cavern’s mouth. We enter a long tunnel-like passage, lofty and wide, but growing more intensely dark at every step. Candles show us that the walls are covered with pictures, and as we enter the larger chamber or chambers to which the passage leads, the eye grows accustomed to the partial light, and the design of the artist becomes clear. It is the progress of the soul through the underworld that we are witnessing in these pictures which line the dimly-lighted walls. (Source: Picturesque Palestine, vol. 4, p. 194.) 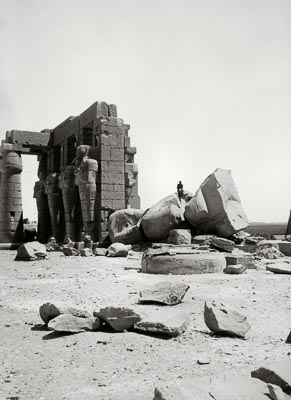 The memorial chapels belonging to these tombs were built in the plain between the mountains and the Nile. The temple of Kurnah is a cenotaph erected by Seti I. to the memory of his father, Rameses I. . . . . The next temple was famous in classical times as the “Tomb of Ozymandias” or “of Memnon,” but it is really the memorial chapel erected by Rameses the Great to his own glory, and therefore with better reason called the Ramesêum. Of this splendid monument, which once had the full array of temple ornament—its two noble gateways, its open court surrounded by a cloister supported by caryatid columns, leading to a hall of many columns, where the heavy stone roofing slabs lent a religious shade to the covered sanctuary beyond—little remains. The lofty gateways are half destroyed, most of the Osiride cloister has disappeared; but the long central vista of tall calyx-topped columns, and the side aisles of lower lotus bud capitals, representing the well-proportioned and well-spaced “hall of assembly,” are enough to show that the Ramesêum must have been one of the most perfect of all the monuments of Egypt. (Source: Picturesque Palestine, vol. 4, p. 195.) 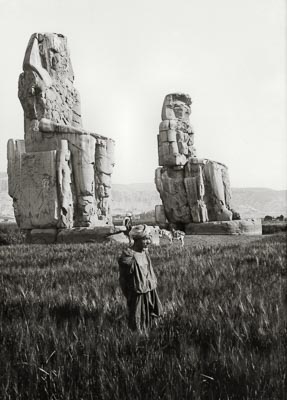 Colossi of Memnon in the Floodwaters of Nile River

Next to the Ramesêum once stood another memorial temple, sacred to Amenoph III., whose tomb is in the western valley in the mountains behind. Not even the foundations of the Amenophêum are now to be traced, but in front of where the pylons must once have been the two colossi which once guarded the temple still stand side by side amid the green fields. These twin giants, representing Amenoph III. seated with his hands on his knees, are perhaps, after the Pyramids, the best-known monuments in Egypt. That on the north [on the right in the picture] is the famous “Vocal Memnon,” which Roman visitors identified with the son of Tithonus and Eôs, . . . . The northern statue, once, like its mate, a monolith of breccia, fifty-one feet high (or with the pedestal sixty-four), was shattered to its middle—it is said by an earthquake which shook the monuments of Thebes in the year 27 B.C.—and this accident was the main cause of its after fame. For from the ruined giant there now came forth a sweet sound, as of a human voice, when the morning sun touched him with its early beams. The phenomenon was doubtless due to the effect of heat upon a cracked stone wet with dew—some say a shrewd priest worked the oracle from within—but to the Greeks and Romans, who were then the chief Nile tourists, the “Vocal Memnon” was nothing less than miraculous. (Source: Picturesque Palestine, vol. 4, pp. 196-97.)

The Court of the Great Temple of Rameses III. at Medinet Habu 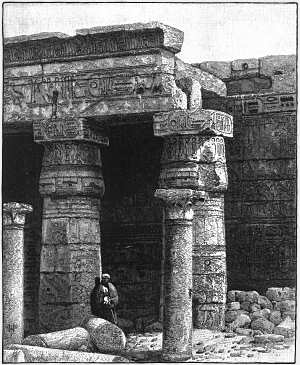 The southernmost of the memorial temples of Thebes is that of Rameses III., or Medînet Habû . . . . it is impossible to deny it one of the first places in the long series of Egyptian monuments. None certainly is more impressive. You enter, through immense pylons, two spacious courts, both open to the sky, the first with a covered colonnade at each side, the second cloistered all round; the columns supporting the roof of the cloister have heavy lotus-bud capitals, or else the colonnade consists of a row of square pillars, with the much-defaced figure of Osiris, or rather of Rameses III. in the attributes of Osiris, sculptured on the side next the court. The second of these magnificent quadrangles was once used as a Christian church, for Roman pillars are still standing on one side, dwarfed by their gigantic neighbours . . . and many lie around on the floor. Beyond is the hall of columns, which must have been too crowded for a just effect, but the merits of which are now beyond discussion, since the columns have all been cut down to four or six feet from the ground to suit the requirements of the Coptic settlement which till lately encumbered the spot. (Source: Picturesque Palestine, vol. 4, p. 198.) 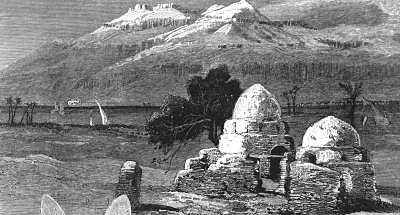 The Plain of Thebes from Near Karnak

In the foreground is seen a modern saint’s tomb; in the middle-distance, the lateen sails of the Nile boats, the twin Colossi, and the Ramesêum stand out above the river, and the view is closed by the finest mountain in Egypt, whose steep cliffs are honeycombed with tombs, and whose towering mass guards and conceals the gloomy “Valley of the Kings” behind . . . . These four memorial temples all stood on the western plain, on the same side of the river as the tombs in which the kings their builders were buried. Indeed it is rare to find any funeral monuments on the east side of the Nile, Beny Hasan excepted. The notion of the sun’s setting in the west, or rather going down into a pit near Abydos, was so closely associated in Egyptian belief with the passage of the soul to the under-world, that a tomb in the west seemed most appropriate for him who must travel the road wherein Osiris had journeyed. The pyramids and all the graves of the great necropolis of Memphis and Sakkarah are on the west of the Nile; and on this side the Theban kings excavated their tombs and built their memorial temples. (Source: Picturesque Palestine, vol. 4, pp. 189, 202.)