Ancient Wall of the Temple Area, East Side, With Muslem Cemetery

The simplest form of tomb is that in which a common grave is sunk in the rock, and a reveal cut round its mouth to receive a covering slab. In some cases the slab is flush with the surface of the rock; in others it is raised above it and ornamented like the lid of a sarcophagus. Another simple form of tomb, to which the name of "trough grave" has been given, is that in which an arched recess is cut in the face of the rock and a common grave sunk in its floor. A third simple form is that in which a rectangular space is cut into the vertical face of the rock, after the manner of an oven, extending six feet or more horizontally inwards, and sufficiently wide and high to admit of a corpse being pushed in. The opening is closed by a stone slab or by a rough unhewn mass of rock. Such a grave is called in the Talmud a "kok" (pl. "kokim"). A fourth kind of tomb is the "shelf grave"-a shelf or bench, six feet long, cut in the vertical face of the rock, upon which the corpse was laid even when it had first been placed in a sarcophagus. The most common description of tomb is that in which a number of kokim, shelf, or trough graves are grouped together in one or more chambers of the same excavation. (Source: Picturesque Palestine, vol. 1, p. 95.)

Tombs of the Kings, Interior 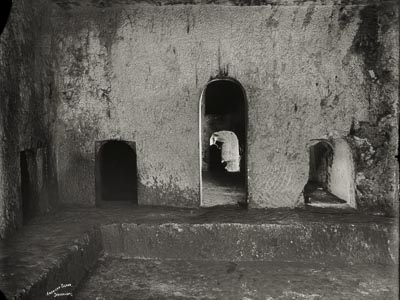 These tombs may be divided into three classes. The first class is that in which a natural cavern in one of the softer strata of limestone is adapted to sepulchral purposes. Kokim are cut in the sides of the cave, with their beds on a level with the ground, and the openings are then closed with rough stone slabs resting against the face of the rock or fitting more closely into the excavation. In this class of tomb no arrangement was made for closing the entrance to the cavern. It seems not improbable that these tombs were used for the burial of the poor, and they were perhaps constructed at the public expense. In the second class of tomb a square or oblong chamber is carefully cut in the solid rock; the entrance is by a low square opening, closed either by a closely fitting stone slab or by a stone door turning on a socket hinge and secured by bolts on the inside. These tombs, remarkable for the care which has been bestowed on the excavation, were probably the family vaults of wealthy people. The third class of tomb is that in which one entrance leads to several tombchambers, each containing a large number of graves, and sometimes sarcophagi. (Source: Picturesque Palestine, vol. 1, p. 95.) 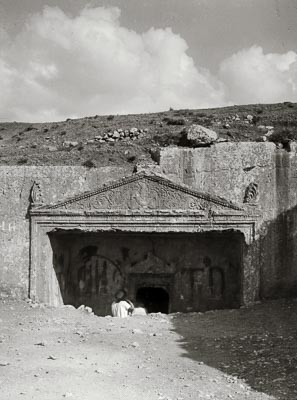 Tomb of the Judges Near Jerusalem

In our own land we are all familiar with the grassy mounds and marble monuments which fill the cemeteries, and which pass away almost as quickly as man himself. In Rome and Pompeii we see the habitations of the dead lining the great highways, and crumbling to ruin like the palaces of their tenants. But the moment we set our feet on the shores of Palestine, we feel that we are in an ancient country-the home of a primeval people, whose tombs appear in cliff and glen and mountain-side, all hewn in the living rock, and permanent as the rock itself. The tombs of Jerusalem are rock-hewn caves. I found them in every direction. Wherever the face of a crag affords space for an architectural façade, or a projecting rock a fitting place for excavation, there is sure to be a sepulchre. I visited them on Olivet and Scopus, on Zion and Moriah, inside the modern city and outside; but they chiefly abound in the rocky banks of Hinnom and the Kidron. Near the junction of these ravines the overhanging cliffs are actually honeycombed. (Source: Jerusalem, Bethany, and Bethlehem, p. 81.)

Arab Home in an Ancient Tomb 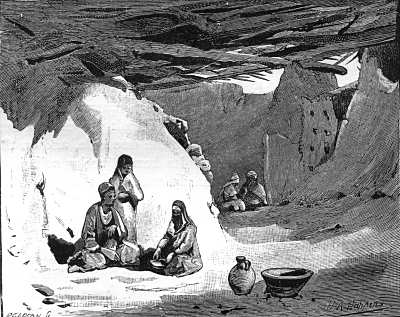 The façades of many are elaborately ornamented; but one thing is very remarkable, they contain no inscriptions. The tombs of Egypt are covered with hieroglyphics, giving long histories of the dead, and of the honours paid to their remains. The tombs of Palmyra not only have written tablets over the entrances, but every separate niche, or loculus, in the interior has its inscription. I have counted more than fifty such in a single mausoleum; yet I have never been able to discover a single letter in one of the tombs of the Holy City, nor a single painting, sculpture, or carving on any ancient Jewish tomb in Palestine, calculated to throw light on the story, name, or rank of the dead. Simplicity and security appear to have been the only things the Jews aimed at in the construction of their sepulchres. To be buried with their fathers was their only ambition. They seem to have had no desire to transmit their names to posterity through the agency of their graves . . . . With the Jews the tomb was an unclean place, which men endeavoured to avoid rather than honour by pilgrimages. (Source: Jerusalem, Bethany, and Bethlehem, pp. 81-82.)

At BiblePlaces, see Garden Tomb or Church of the Holy Sepulcher