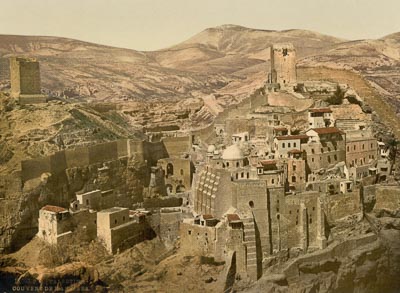 The [Mar Saba] convent is considered by the Greeks almost a penal one, and scandal says that all its inmates except the superiors have been sent hither for heresy or other offences. Of heresy certainly they must be acquitted, so far as their knowledge goes, for they are profoundly ignorant, and whatever their other offences may have been, they are unwearied in their devotions. Every monk has to attend the services seven times in the twenty-four hours, from 4 A.M. to midnight. Only one-third of the sixty brethren are in holy orders, and many of the lay brethren are unable to read. They are from Turkey, Greece, the Archipelago, and a few Russians; but modern Greek is the language of daily intercourse, and few understand Arabic. All are under a vow never to taste fresh meat, and their diet is both meagre and stinted in quantity. Eggs are permitted on Sundays only. On other days the allowance is a small brown loaf, a dish of cabbage broth, a plate of olives, an onion, half an orange, a quarter of a lemon, six figs, and half-a-pint of wine apiece. A little raki or spirits is also permitted. (Source: Picturesque Palestine, vol. 1, p. 151.) 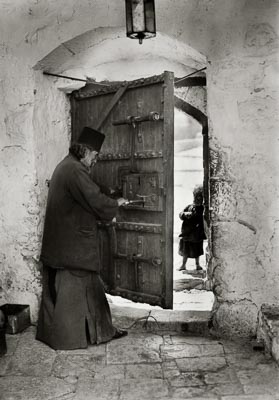 A monastic life is chosen, as one of the monks here [at Mar Saba] told us, for the sake of peace and of eating the bread of idleness, and there is no training for their vow, nor any thought of applying this life of the religious to the advantage of the Church. Thus while every Latin monastery in Syria is the centre of an aggressive mission, the Eastern Church does not even adapt her battalions of celibates to man her defensive works. Ages of Moslem oppression and the dense ignorance of the local priesthood have done their work; and while the truth has been obscured and the written Word of God forgotten, she seems to have lost even the desire to discover or understand it. These poor monks have but one amusement, and that is the feeding and cultivating the various wild birds and animals of the glen. In this they have been marvellously successful. (Source: Picturesque Palestine, vol. 1, p. 151.)

The ordinary mode of calling the fraternity to prayers is by striking with a hammer a piece of iron, like part of the tire of a wheel, more or less bent, and suspended by ropes (see [illustration]). A flat piece of granite, thus suspended and struck with a wooden stick, serves the same purpose, producing a ringing sound . . . . in the lower stage of the great bell-tower there is a long plank of wood which, on being struck, can be heard all over the convent. Bells are only rung on church festivals and occasions of rejoicing, or to show respect to some high dignitary . . . . The Convent of St. Catherine belongs to the Greek Church, and is presided over by a non-resident archbishop, who is represented by a prior or agent, but the affairs of the convent are actually managed by an intendant. The monastic rules are very strict, and, the convent is said to be regarded as a kind of penal settlement. Most of the monks are uneducated men, and nearly every one practises some handicraft, but their tools are of the most primitive character. (Source: Picturesque Palestine, vol. 3, pp. 234, 238.) 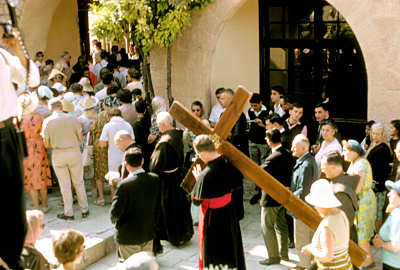 There is every reason to suppose that we may place the regular constitution of the monastic order at the close of the third century, and that Egypt was the cradle of monasticism in its Christian garb. Monasticism was not the invention but the inheritance of Christianity. The human mind seems always to have had a desire to flee away to the wilderness and be at rest. Retirement and solitude, quite apart from any teaching of Christianity, have again and again, at different ages and in different climates, suggested themselves as the safer conditions under which frail man may be able to obtain conquest over self, and attain to the perfection of God. It does not matter whether the result has been successful, or whether men-who have thus retired from the world-have lost sight of the discipline which God has ordained for us by stationing us in the world. The fact remains that to a variety of dispositions, and under the most opposed circumstances of life, separation from the world has suggested itself as the only panacea for the diseases of the soul. (Source: Picturesque Palestine, vol. 4, p. 75.)