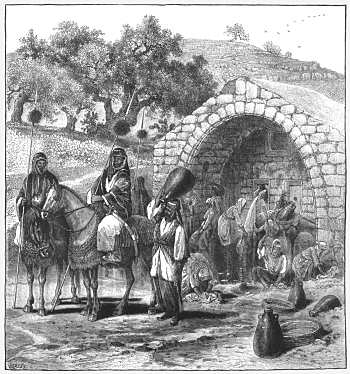 The Fountain of the Virgin, Nazareth

Saint Mary's Well, or the Fountain of the Virgin, is situated near the "Church of the Annunciation." The spring is a little to the north of the church and is conducted past the altar on the left side. There is an opening here, and the Greek pilgrims bathe their eyes and head in the sacred stream. Through this conduit the water runs to St. Mary's Well. It is strongly probable that the child Jesus and his mother often came hither to draw water. An arch is built above it, and steps lead down to the tank and trough. The motley throng which gathers around it toward evening presents a picturesque scene indeed-women with quaint costumes are constantly to be seen drawing water in pitchers of graceful form or climbing the wet steps bearing the full vessels upon their heads. (Source: Earthly Footsteps of the Man of Galilee, p. 105.)

Saint Mary's Well, or the Fountain of the Virgin 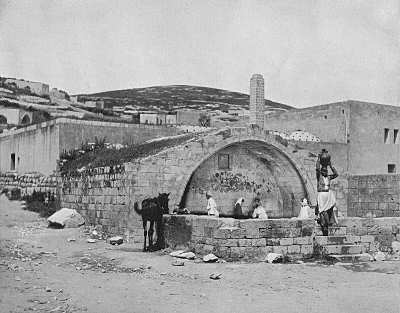 Source: Earthly Footsteps of the Man of Galilee, p. 105

The water leaps from a spout into a stone trough where women wash and rinse clothes and chat cheerily among themselves. Marion Harland writes from this spot: "Mary was a peasant and a working-woman like these. We think ourselves as if guilty of irreverence in wondering if she bore the narrow-neck pitcher upon her head with the audacious grace of that laughing girl who does not touch it with her hand, and if she adjusted it before mounting to the steps, upon the colored cloth such as the handsome woman down there has impressed between her veiled head and the dripping vessel. Yet, and again, 'the highly favored among woman' was a daughter of the people and her son at thirty-three years of age 'had not where to lay his head.'" (Source: Earthly Footsteps of the Man of Galilee, p. 105.) 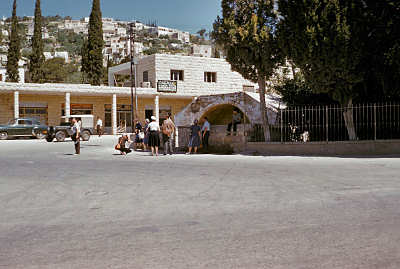 This must ever have been the well of Nazareth, and the only one . . . . The open space is the rendezvous of the town, for there is no "gate of the city" where there is no wall. Hither we may be quite sure the Virgin-mother daily came followed by her Divine Son, and often He, too, as He grew up, would carry his pitcher with his mother . . . Here, says the tradition, the angel Gabriel appeared to Mary, and hence the Great Church of the Greeks just above is dedicated to Gabriel. The present church is a modern structure, but occupies the site of one which existed in the time of Arculph, A.D. 700. The spring is under the church, a portion of which is actually cut out of the rock. There is a well let down in the pavement, by which water is raised for the use of pilgrims, and a channel of masonry at a considerable depth conveys the stream to the public fountain. (Source: Picturesque Palestine, vol. 2, pp. 46-47.)